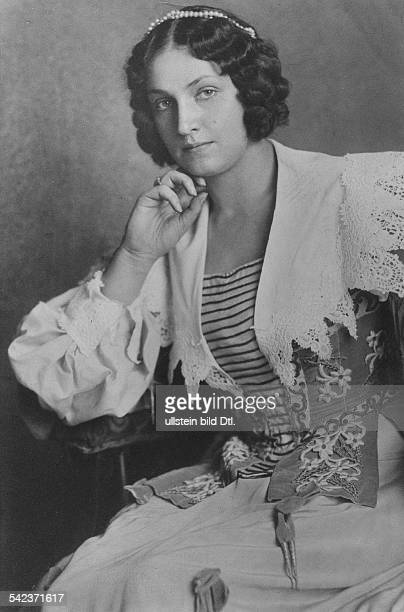 She became interested into the theater scene and took acting lessons. She gained a foothold on stage in 1907 and she began her artistic career in Meiningen. In the next years followed engagements at different theaters, among them the Burgtheater in Vienna, the Theater in der Josefstadt and the Neue Schauspielhaus in Berlin where she worked together with Max Reinhardt.

In 1910/1911 she played at the Burgtheater in Vienna and the following season at the Neuer Schauspielhaus in Berlin under Max Reinhardt. In 1912 she went back to Vienna, this time to the Deutsche Volkstheater, where she stayed until 1924, where she returned from 1926 to 1930. In between, she was engaged at the Theater in der Josefstadt and again at the Burgtheater.

On December 6, 1919, she gave the Fiore in Thomas Mann's “Fiorenza” at the Akademietheater at the Vienna premiere and got to know the writer on this occasion.

Thanks to her acquaintance with Alban Berg, in 1920 she joined the circle of Viennese modernist musicians and performed as a vocalist and singer. She was an intimate friend of Berg's sister, Smaragda Eger-Berg. On January 31, 1921 she performed the premiere of Two Songs Op. 14 Arnold Schoenberg (piano part Ernst Bachrich ). In 1922 she participated in the International Chamber Music Festival in Salzburg . She especially performed with the Schoenberg cycle “ Lunar Pierrot ”, only in 1921 giving 20 concerts with this composition in the program and then performing it until 1937 in different European countries (including in 1935 in Leningrad with an ensemble under the leadership of Fritz Stiedry).

She appeared in front of the camera: from 1922-1935 she appeared in at least four films; she took part in the famous film by Michael Curtis “ Sodom and Gomorrah ” (1921). In 1932 she appeared in the film adaptation of the operetta of Franz Lehar 's operetta Friederike.

In 1933, the Stiedrys moved to Leningrad, where Fritz Stiedry led the orchestra. Here they spent four years, Erika occasionally performed as a vocalist with her husband as an accompanist. In 1937 the family returned to Vienna, and in 1938 they left Austria again to emigrate to the United States. Since 1939, they lived in Princeton , and since 1949, near Los Angeles . In 1940-1941 Stiedry-Wagner performed on the stage of the Austrian Theater in New York, including in the "Countess Mizzi" by Arthur Schnitzler and the "Terrible Parents" by Jean Cocteau . In 1940, she recorded Schoenberg's Lunar Pierrot with an instrumental ensemble under the direction of the author. Later she acted more like a reader, including at a gala evening in honor of the 70th anniversary of Thomas Mann in New York. In 1951, she presented a melodrama based on the third part of Schönberg's Gurre Songs (with the Cincinnati Symphony Orchestra , conductor Tor Johnson ). In 1944 she received American citizenship.

Her daughter Jeska died pan> in April 1945 with her husband and newborn baby during a bomb attack on Halberstadt.

Erika Wagner lived with her husband in the USA till 1958. After the end of his engagement at the Metropolitan Opera they went to Zurich. Erika Wagner remained active there in the cultural society.