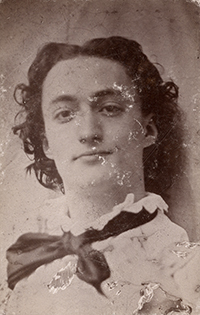 Emil Alois Mario Ferdinand Hugo Vacano (born November 16, 1840 in Moravian Schönberg, Moravian Silesia, died June 9, 1892 in Karlsruhe) was born in what is now the Czech Republic. He was an artist and writer in what was then the dual monarchy of Austria-Hungary.

He was the son of a cadastral superintendent and in his youth he had a feminine appearance and using the names Signora Sangumeta and Mademoiselle Corinna he was popular as a woman school-rider and a circus rider. It is also said that he lived for a time in a convent. Only a few people knew Signora Sangumeta's secret.

He settled down when he fell in love with an Italian officer, and concentrated on his writings, producing numerous historical novels and short stories, sometime with his friend Emerich von Stadion. He frequented the circle of Leopold von Sacher-Masoch. Some of his works pioneer the gay novel, especially König Phantasus based on the life of Ludwig II of Bavaria.

Later in life he often stayed in St. Pölten with his mother. In 1890 he moved to Karlsruhe, and lived in the house of his friend Karl Friedrich Plock, maintaining, among other things, contact with Heinrich Vierordt and worked as a journalist. He died in 1892.