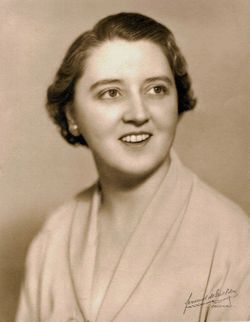 Emeline Clark Roche (October 3, 1902 - October 20, 1995) was a set and costume designer, who, at various stages of her career, was involved in other aspects of theatrical production including lighting design and stock company management. Roche also worked as a technical designer for New York City stage, television and stock productions, as well as a designer of commercial productions.

Emeline Roche was born on October 3, 1902, the daughter of Spencer Summerfield Roche (1849–1916) and Emma Clark Hendrickson (1865-1950). She studied at the Art Students League, the New York School of Fine Arts, and with Norman Bel Geddes, later continuing on his staff for four years as an assistant draftsperson. During 1935-36, she served on the faculty of the Florence Cane School of Art. Beginning in the late 1920s until 1939, she was involved with the Actor-Managers, Inc. run by Helen Arthur, Executive Director, Agnes Morgan, Aline Bernstein and Clara A. Weiss. She staged stock productions for that organization at the Newport Casino Theatre and Ann Arbor, among other venues. She was the stage manager for the touring companies of Ruth Draper and Angna Enters. Ms. Roche also worked as a technical supervisor for Aline Bernstein and Robert Edmond Jones. During the 1930s and 1940s she was a technical assistant and costume designer for Herman Shumlin, Gilbert Miller, Charles Frohman, Inc. and the Theatre Guild, designing Broadway productions including Grand Hotel, State of the Union, Animal Kingdomand The Late Christopher Bean. During World War II, Emeline Roche contributed her time and talents to the Stage Door Canteen and was the co-designer of the set for the original canteen. She served on the Executive Committee of the American Theatre Wing (ATW) War Service Inc. She also worked as an army aircraft spotter. She joined the United Scenic Artists, Local 829, in 1927, and worked as a volunteer with the union from that time until her death in 1995. From 1947-1954, she served as recording secretary of the union and corresponded with designers including Jo Mielziner. After the war, she assisted Lee Simonson, designing the setting for the Metropolitan Opera's 1947-48 production of the Ringcycle. From 1948 until 1954 she served as the costume designer for New York City Center Drama Productions. Roche designed the costumes for the ANTA annual benefit at the Ziegfeld Theatre from 1949 to 1950 and again in 1955. She also served as technical designer for the television show the Kate Smith Hour, which ran until October 1951, and worked as a designer of exhibitions and pageants for corporations.

Roche met Jane Cowl in 1938 when Cowl was an actor in a stock production of Rain from Heavenat Ann Arbor. They later both served on the Executive Committee of the American Theatre Wing during World War II and became personal friends. As a result, Roche became involved with some of Cowl's other closest associates, including Jane Murfin, the co-author of four of her productions. After Jane Cowl's death in 1950, Roche organized the memorial in her honor and later purchased some of her property at auction in 1952. Emeline Roche died on October 20, 1995 at the age of 93.