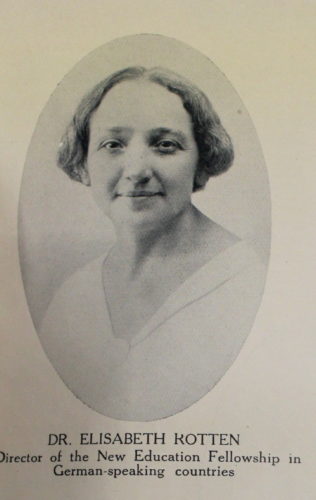 Elisabeth Friederike Rotten was the daughter of the Swiss couple Moritz and Luise Rotten. She attended the ten-class high school "Luisenschule" from 1888 to 1898, later the Victorialyzeum Berlin from 1904. In September 1906 she passed the final examination at the Kaiserin-Augusta-Gymnasium Charlottenburg. She studied philosophy, German studies in Heidelberg, Berlin, Marburg and Montpellier. In Marburg, the encounter with Hermann Lietz and Gustav Wyneken became decisive for their further career. In 1913 she defended her doctoral thesis on "Goethe's Primal Phenomenon and the Platonic Idea" at the University of Marburg and went to the University of Cambridge as a lecturer in German literature. In 1914 she returned to Berlin and worked at the rescue agency "Information and Assistance Office for Germans Abroad and Foreigners in Germany" together with Friedrich Siegmund-Schultze. [1] In the same year she became co-founder of the "Bundes Neues Vaterland", later "German League for Human Rights".

In 1915, she traveled to the 1st International Women's Peace Congress in The Hague as a representative of the Confederation and participated in the founding of the International Women's League for Peace and Freedom (WILPF). In Berlin in 1916, where Emily Hobhouse had never been, not speaking the language, in her own words, ‘a formidable old maid in a grey bonnet and a golf cape’, accompanied by the escort the Germans had forced upon her, a nervous young man who was obviously puzzled about how to prevent Miss Hobhouse from doing what she wanted. She had in her bag one address, that of Elizabeth Rotten, who had been born in Berlin, had lectured on German literature in Cambridge, been to The Hague, co-founded the German League for Human Rights, and was now back in Berlin helping foreigners in Germany. When Hobhouse tracked her down, ‘We fell on each other’s necks with joy’. Rotten suggested getting in touch with Alice Salomon and going to see Salomon’s Arbeiterinnenheim (Female Workers’ Home, a sort of Settlement where women reformers and trainee social workers lived with single working women). Salomon, a feminist and internationalist, had founded social work as a profession in Germany; some called her ‘the Jane Addams of Germany’. She invited Hobhouse to a light supper in her apartment. ‘It was interesting,’ Hobhouse reported, ‘this peek of a German “professional” woman’s flat. She had one maid and supper was ordered … it certainly was light. In a moment I realized how short food was in private houses, there was an omelet made of one egg for the two of us, there were three very small and very thinly cut slices of bread –there was a very small dish of stewed cherries. In addition there was a small block of butter 3oz the total supply per head for two weeks. I realized I must only make a feint of taking any and just scraped it with my knife. As to the omelet we took tiny mouthfuls and eked them out with much conversation.’

In 1919 Rotten gave the much-publicized speech at the International Conference of Education in Geneva on "The Attempts of a New Education in Germany". She was a co-founder of the Federal Decided School Reformer. Until 1921 she worked as head of the pedagogical department of the "German League for the League of Nations" and from 1920 to 1921 published the "International Educational Review" (as a supplement to the magazine "The New Education"). In 1921 she became co-founder of the New Education Fellowship and director for the German-speaking countries. Elisabeth Rotten – in the succession of the International Educational Review – published the magazine Das Werdende Zeitalter (from 1926 together with Karl Wilker).

In 1922 she worked in the school farm Insel Scharfenberg near Berlin. In 1923 she took part in the foundation of the art-commercial settlement on the Kohlgraben estate near Vacha in the Rhön. Until 1923 she worked with the English Quakers in the Children's Aid (Quaker Feeding), in 1930 she became a member of the Religious Society of Friends (Quakers). From 1925 she was co-director of the International Bureau of Education in Geneva. From 1930 to 1934 she worked in the garden town of Hellerau, among others as co-founder of the Hellerau State Welfare School . During this time she had an intensive exchange of views with Siddy Wronsky, in which Friedrich Siegmund-Schultze, the founder of the Social Working Group Berlin-Ost, was also involved. "In this circle, for example, there was a good talk about Ben Schemen, because all those involved knew Siegfried Lehmann from his time at the Jewish People's Home in Berlin. Elisabeth Rotten was also interested in Ben Schemen and the idea of the "Children's Republic" as co-founder of the Pestalozzi Children's Village in Trogen/Switzerland (1944) and the International Federation of Children's Villages." [2] Also during this time, Elisbeth Rotten and Jean Piaget founded the Swiss Montessori Society; She was vice-president of the Association Montessori Internationale from 1937 until her death.

In 1934 she emigrated to Switzerland, to Saanen in the Bernese Oberland. There she continued her work with lectures, courses, publications and translations. After 1945 she participated in the foundation of the previously mentioned International Pestalozzi Children's Village in Trogen in the canton of Appenzell Ausserrhoden. Rotten's cooperation in the construction and development of the children's village placed this in the pedagogical reform movement of the 20th century. Her book "The Spiritual Place of the Children's Village", published in March 1945, received a lot of attention in the pedagogical community. [3] In 1947 she worked as a lecturer at the Pedagogical University of Berlin. In 1948 she headed the "Office for Cultural Exchange" of the "Swiss Donation for the Victims of War". In addition, Elisabeth Rotten also worked as a translator (by Erich Fromm, Upton Sinclair and others). Rotten died in May 1964 and was buried in Saanen.