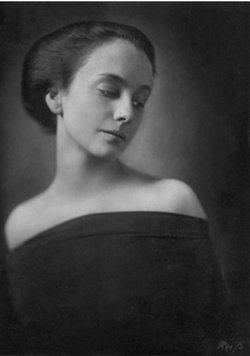 Eleonora Gabriella Marie Josepha von Mendelssohn, also known as Eleonora Fischer (January 12, 1900 - January 24, 1951) was a German actress. She was an intimate friend of Mercedes de Acosta. She counted among her friends an array of notables from the international artistic community. Among them were Alexander Woolcott, Arturo Toscanini, Noel Coward, Thornton Wilder and Helen Hayes.

The morphine-addicted and often unhappily in love Eleonora von Mendelssohn married the Swiss pianist Edwin Fischer (1919-1925), the Hungarian riding master Imre or Emmerich or Jedre von Jeszenszky or Jessinski in her second marriage (in 1925), the Austrian actor Rudolf Forster in her third marriage (1938-1940) and the actor Martin Kosleckin or Kosleck her fourth marriage (1947-1951).

After the Nazis came to power, Eleonora and Francesco Mendelssohn emigrated, although they were baptized and at first had no reprisals to fear. Eleonora von Mendelssohn moved to Schloss Kammer am Attersee in August 1925, the castle was acquired halfway by her and her future husband Emmerich von Jeszenszky, who became the sole owner after the divorce in 1936. In 1934, Eleonora von Mendelssohn under Max Reinhardt began a European tour. To finance it, she sold El Greco's Laocoon. In the fall of 1935, she and her brother emigrated to the United States. Eleonora von Mendelssohn tried to continue her career on Broadway and also worked as a spokeswoman for the German-language news programs of the Office of War Information, Francesco von Mendelssohn became assistant director with Max Reinhardt. Both supported other emigrants in financial distress. Eleonora von Mendelssohn had been able to carry out some of her works of art and furniture as moving goods to Austria. In this way, works by Corot, Manet and Monet were saved. A self-portrait by Rembrandt and an efficity of Hendrikje Stoffels had transported her to Basel; in Berlin, only copies painted by her grandfather were left behind. The real paintings were kept by the Basel art dealer Christoph Bernoulli, until a cousin of the siblings, Robert von Mendelssohn, insisted, for fear of the discovery of the fraud, that they were returned to Germany and deposited in the Mendelssohn bank. This was "arized" in 1938. In 1940, at the instigation of Alfred Hentzen, the paintings were housed in the Prussian State Bank in order to make it impossible to sell abroad. Aldo Cima, the asset manager Giulietta von Mendelssohns, had numerous works of the Mendelssohn collection sold by the Viennese art dealer Otto Schatzker, among them Degas' Harlequin and Columbine, two tree landscapes of Corot, L'Inconnue by Manet and Une Allée du Jardin of Monet, Giverny von Monet and the two paintings still attributed to Rembrandt at the time. Schatzker simultaneously offered these two works to the Kunsthistorisches Museum Vienna and Hans Posse, who bought for the Führermuseum in Linz. Initially, the Kunsthistorisches Museum Vienna acquired both paintings, but then Baldur von Schirach intervened and secured the Hendrikje Stoffels for the Linz project at a price of 900,000 Reichsmarks. Meanwhile, Eleonora von Mendelssohn was forced in the USA to sell works of art from her collection in order to be able to make a living and treat her brother, who had been alcoholic since 1937. In 1939 she sold Vincent van Gogh's Irises, in 1941 a Pissarro landscape, in 1942 a painting by Alfred Sisley and after the Second World War the port of Bordeaux by Manet. In 1946, she traveled to Europe and met with Aldo Cima to develop strategies for recovering the collection of images. Cima advised her to bribe the museum directors, but her lawyer did not accept this proposal and pleaded for the paintings to be returned to possession either by legal means or by buyback. However, the problem for the lawyer Karl Trauttmannsdorff, whom she commissioned in 1948 to obtain the reimbursement of the paintings, was the fact that Giulietta von Mendelssohn himself was not of Jewish descent and did not appear to have sold the paintings under duress. At the Central Collecting Point in Munich, where The Hendrikje Stoffels had appeared, Eduard Hanfstaengl even claimed that Giulietta von Mendelssohn was an enthusiastic supporter of National Socialism.

Eleonora von Mendelssohn performed on stage with husband Kosleck twice, once in Berlin in a production of "The Tribune" and again on Broadway in "The Madwoman of Chaillot" in 1950. After perfecting her English, she appeared on the New York stage in a number of plays including: “Flight to the West”, “The Russian People”, “The Secret Room”, “Daughters of Atreus” and “The Madwoman of Chaillot”. Her one major Broadway success was her role in “Flight to the West” where she played a Jewish woman fleeing Germany. In 1950, Eleonora von Mendelssohn made her only film appearance in a supporting role in Blood Rache in New York alongside Gene Kelly. In January 1951, Francesco von Mendelssohn was arrested after a brawl and then suffered a stroke. Eleonora of Mendelssohn's fourth husband rushed out of the window at the same time in a love crisis and suffered a spinal injury. While the two men were in hospital, Eleonora was found dead in her apartment by Mendelssohn on January 24, 1951. She had an ether-soaked gauze lobe on her mouth, with a towel and a bath mat lying over it. In addition to the dead, a tube of sleeping pills and a half-empty aether was found, and several syringes were found on her bedside table. No evidence of third-party culpability was found during an autopsy, but rumours persisted that Eleonora had been murdered by Mendelssohn. The turbulent relationship between Eleanora and husband Martin Kosleck was chronicled in the book "The Grand Surprise: The Journals of Leo Lerman" (2007). Leo Lerman, who was a close gay friend to Eleanora, claims that Kosleck had a male lover at the time of his wife's mysterious death in 1951. Her death was reported as a suicide although Lerman claims that after her death a pillow was found over Eleonora's face and a bath mat had been soaked in ether.

After Eleonora's death, her executor Lillian D. Rock and her brother continued to work to restore the works of art. It was now tried to prove that Giulietta von Mendelssohn had given her children the art collection on December 31, 1932. Even Albert Einstein campaigned for the return of the paintings, but the application was rejected in Germany in 1953 and Lillian D. Rock became no longer active. Francesco von Mendelssohn was no longer able to take care of the matter. He lived first in a psychiatric hospital, where a lobotomy may have been performed on him, and later with Lilly Wittels, the widow of the psychiatrist Fritz Wittels. When the case of the paintings from the Mendelssohn collection was heard before the Commission of Provision in Vienna in 1964, no representative of Francesco von Mendelssohn appeared. At the beginning of the 21st century, heirs of Eleonora and Francesco von Mendelssohn tried again to prove that Giulietta von Mendelssohn had to give the pictures due to persecution.