Doug Wright (born December 21, 1962) is an American playwright, librettist, and screenwriter. He received the Pulitzer Prize for Drama in 2004 for his play, I Am My Own Wife.

Wright was born in Dallas, Texas. He attended and graduated from Highland Park High School, in a suburb of Dallas, Texas, where he excelled in the theater department and was President of the Thespian Club in 1981. He earned his bachelor's degree from Yale University in 1985. He earned his Master of Fine Arts from New York University. He is a member of the Dramatists Guild and serves on the boards of Yaddo and New York Theatre Workshop. He is a recipient of the William L. Bradley Fellowship at Yale University, the Charles MacArthur Fellowship at the Eugene O'Neill Theater Center, an HBO Fellowship in playwriting and the Alfred Hodder Fellowship at Princeton University.

Wright’s play Quills premiered at Washington, D.C.'s Woolly Mammoth Theatre Company in 1995 and subsequently had its debut Off-Broadway at New York Theatre Workshop. The play recounts the imagined final days in the life of the Marquis de Sade. Quills garnered the 1995 Kesselring Prize for Best New American Play from the National Arts Club and, for Wright, a 1996 Village Voice Obie Award for Outstanding Achievement in Playwriting.[1] In 2000, Wright wrote the screenplay for the film version of Quills which starred Geoffrey Rush.

Wright’s I Am My Own Wife was produced Off-Broadway by Playwrights Horizons in 2003. It transferred to Broadway where it won the Tony Award for Best Play, as well as the Pulitzer Prize for Drama. The subject of this one-person play, which starred Jefferson Mays, is the German transvestite Charlotte von Mahlsdorf.

In 2006, Wright wrote the book for Grey Gardens, starring Christine Ebersole and Mary Louise Wilson. The musical is based on the Maysles brothers’ 1975 film documentary of the same title about Edith Ewing Bouvier Beale (“Big Edie”) and her daughter Edith Bouvier Beale (“Little Edie”), Jacqueline Kennedy Onassis’s aunt and cousin. He adapted the Disney's film The Little Mermaid for the Broadway musical, which opened in 2007. 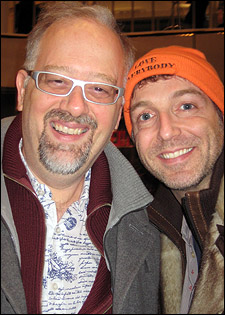 For television, Wright worked on four pilots for producer Norman Lear and teleplays for Hallmark Entertainment and HBO. In film, Wright’s credits include screenplays for Fine Line Features, Fox Searchlight, and DreamWorks SKG.

As an ardent supporter for writers' rights in the theatre industry, he is a member of the Dramatists Guild of America and currently serves as the elected president of the non-profit organization. He also serves on the board of New York Theatre Workshop. He is a recipient of the William L. Bradley Fellowship at Yale University, the Charles MacArthur Fellowship at the Eugene O'Neill Theater Center, an HBO Fellowship in playwriting and the Alfred Hodder Fellowship at Princeton University. In 2010 he was named a United States Artists Fellow.[3]

Wright lives in Lower Manhattan, New York City with his husband, singer/songwriter David Clement. On May 16, 2008, a day after the California supreme court ruled to legalize same-sex marriage, David Clement proposed to his partner Doug Wright, on a Post-it note (they were together since 2003). The note, attached to a wooden Hello Kitty picture frame bearing a Halloween snapshot of the couple, said, “Marry me quickly! Love, David.” Wright said yes. Doug Wright and David Clement were married in August 28, 2008. Wright said that the decision to get married was a mutual one and they had been discussing it for a long time. Both men's parents and a few intimate friends assembled together for their wedding at the Casa Del Mar hotel in Santa Monica, California.