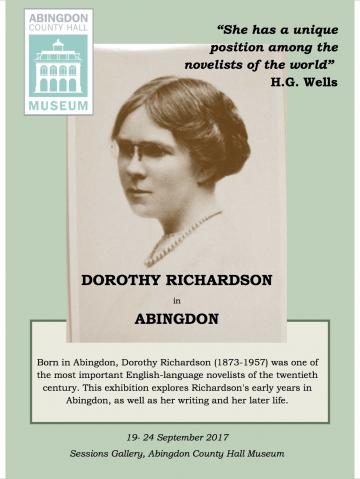 Dorothy Miller Richardson (17 May 1873 – 17 June 1957) was a British author and journalist. Author of Pilgrimage, a sequence of 13 semi-autobiographical novels published between 1915 and 1967—though Richardson saw them as chapters of one work—she was one of the earliest modernist novelists to use stream of consciousness as a narrative technique. Richardson also emphasises in Pilgrimage the importance and distinct nature of female experiences. The title Pilgrimage alludes not only to "the journey of the artist ... to self-realisation but, more practically, to the discovery of a unique creative form and expression".[1] Shipping heiress Bryher, the writer born Winifred Ellerman, gave money to Djuna Barnes, Sylvia Beach, Edith Sitwell and Dorothy Richardson, among others.

Richardson was born in Abingdon in 1873, the third of four daughters. After the fourth daughter was born her father (Charles) began referring to Dorothy as his son. Richardson "also attributed this habit to her own boylike willfulness".[2] She lived at 'Whitefield' a large mansion type house on Albert Park (built by her father in 1871 and now owned by Abingdon School.[3] Her family moved to Worthing, West Sussex in 1880 and then Putney, London in 1883. In London she "attended a progressive school influenced by the ideas of John Ruskin",[4] and where "the pupils were encouraged to think for themselves". Here she "studied French, German, literature, logic and psychology".[5] At seventeen, because of her father's financial difficulties she went to work as a governess and teacher, first in 1891 for six months at a finishing school in Hanover, Germany. In 1895 Richardson gave up work as a governess to take care of her severely depressed mother, but her mother committed suicide the same year. Richardson's father had become bankrupt at the end of 1893.[6] Richardson subsequently moved in 1896 to an attic room, 7 Endsleigh Street, Bloomsbury, London, where she worked as a receptionist/secretary/assistant in a Harley Street dental surgery. While in Bloomsbury in the late 1890s and early 1900s, Richardson associated with writers and radicals, including the Bloomsbury Group. In 1904 she took a holiday in the Bernese Oberland, financed by one of the dentists, which was the source for her novel Oberland.[7] H.G. Wells was a friend and they had a brief affair which led to a pregnancy and then miscarriage, in 1907. Wells was married to a former schoolmate of Richardson's.[8] On leave from work she stayed in Pevensey, Sussex and went to Switzerland for the winter.[9] Then she resigned from her Harley Street job and left London "to spend the next few years in Sussex ... on a farm run by a Quaker family".[10] Richardson's interest in the Quakers led to her writing The Quakers Past and Present and editing an anthology Gleanings from the Works of George Fox, which were both published in 1914.[11] She spent much of 1912 in Cornwall, and then in 1913 rented a room in St John's Wood, London, though she also lived in Cornwall.[12]

While she had first published an article in 1902, Richardson's writing career, as a freelance journalist really began around 1906, with periodical articles on various topics, book reviews, short stories, and poems, and as well as she translated during her life eight books into English from French and German. The subjects of Richardson's book reviews and early essays range "for Whitman and Nietzsche to French philosophy and British politics" demonstrating both "the range of her interests and the sharpness of her mind".[13] Starting in 1908 Richardson regularly wrote short prose essays, "sketches" for the Saturday Review, and around 1912 "a reviewer urged her to try writing a novel".[14] She began writing Pointed Roofs, in the autumn of 1912, while staying with J. D. Beresford and his wife in Cornwall,[15] and it was published in 1915. She married the artist Alan Odle (1888-1948) in 1917 – a distinctly bohemian figure, associated with an artistic circle that included Augustus John, Jacob Epstein, and Wyndham Lewis. He was fifteen years younger than her, tubercular and an alcoholic, and was not expected to live long. However, he stopped drinking and lived until 1948.[16] Odle was very thin and "over six feet tall with waist-length hair wound around the outside of his head", which he never cut. He also rarely cut his finger nails.[17] From 1917 until 1939, the couple spent their winters in Cornwall and their summers in London; and then stayed permanently in Cornwall until Odle’s death in 1948. She supported herself and her husband with freelance writing for periodicals for many years, as Alan made little money from his art. Between 1927 and 1933 she published 23 articles on film in the avant-garde little magazine, Close Up,[18] with which her close friend Bryher was involved. In 1954, she had to move into a nursing home in the London suburb of Beckenham, Kent, where she died in 1957.[19] The last chapters (books) of Pilgrimage, published during Richardson's lifetime, were Clear Horizon in 1935 and Dimple Hill with the 1938 Collected Edition. This Collected Edition was poorly received and Richardson only published, during the rest of her life, three chapters of another volume in 1946, as work in "Work in Progress," in Life and Letters. The final chapter (13th book) of Pilgrimage, March Moonlight, was not published until 1967, where it forms the conclusion to Volume IV of the Collected Edition; though the first three chapters had appeared as "Work in Progress," Life and Letters, 1946. This novel is incomplete.[20] Apparently because of the poor sales and disappointing reception of the Collected Edition of 1938, she lost heart.[21] She was 65 in 1938.

A blue plaque was unveiled, in May 2015, at Woburn Walk in Bloomsbury, where Richardson lived, in 1905 and 1906, opposite W. B. Yeats, and The Guardian comments that "people are starting to read her once more, again reasserting her place in the canon of experimental modernist prose writers".[41]