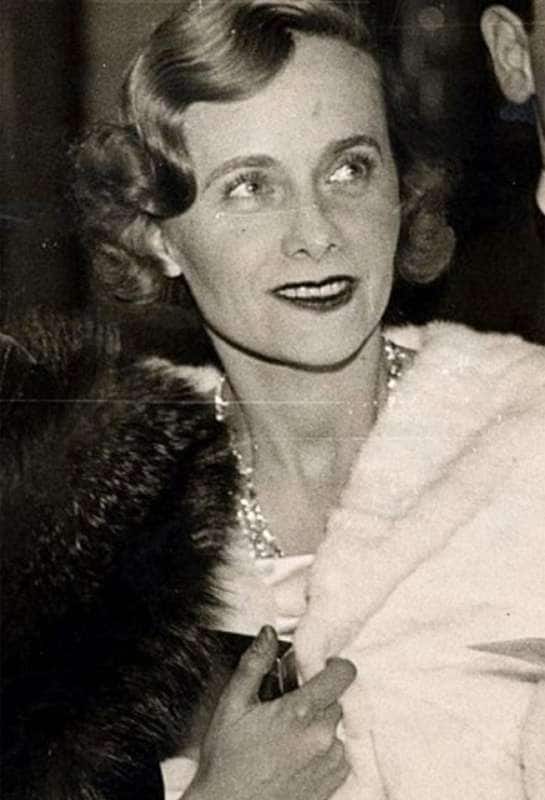 Doris Castlerosse (née Delevingne; 25 September 1900 – 12 December 1942) was an English socialite and the first wife of Valentine Browne, 6th Earl of Kenmare.[1] She was born Jessie Doris Delevingne[1] in London, the eldest child of a British-born haberdasher of French origin named Edward Charles Delevingne and his wife, the former Jessie Marion Homan. She entered the family business as a saleswoman of second-hand dresses, serving theatres in London, and as a result met the actress Gertrude Lawrence, who introduced her into London society.[1] Her lovers, prior to her marriage, included Tom Mitford and American millionaire Stephen "Laddie" Sanford.[2] She met Browne, then Viscount Castlerosse, when he was working in London, and married him mainly for his social position. They were married on 16 May 1928, and she was thereafter styled Viscountess Castlerosse, becoming familiarly known in society as Doris Castlerosse. Soon afterwards she embarked on an affair with Randolph Churchill,[3] son of the future prime minister. The viscount and viscountess were childless, and divorced in 1938, with Robert Heber-Percy, a well-known homosexual whom she was allegedly trying to "cure", named as co-respondent.[2] Her other lovers included society photographer Cecil Beaton, and possibly Winston Churchill himself.[3] Churchill's former private secretary, Jock Colville, revealed his knowledge of the affair with Churchill in a 1985 interview with Correlli Barnett, stating that Churchill had met Doris on holidays in the South of France at a villa owned by actress Maxine Elliott. Doris was one of many women whose portraits were painted by Churchill.[4] However, Churchill's biographer Andrew Roberts has rejected the idea that they had an affair.[5] In 1940, Doris went to the United States, where she found it difficult to resume her earlier career as a courtesan. In 1942, she obtained Winston Churchill's assistance to return to the UK.[2] On her return she was met by her ex-husband, who, according to some sources, hoped to make a fresh start in their relationship.[4] In debt and no longer socially in demand, she died of an overdose of sleeping pills at the Dorchester Hotel, in London’s Park Lane.[6] Through her brother Edward Dudley Delevingne, Doris was the great-aunt of models Poppy Delevingne and Cara Delevingne.[7]


Faringdon, February 1937. Gertrude Stein is sitting on the right, opposite Lord Berners. Their partners are sitting on the steps: Robert Hebert-Percy and Alice B. Toklas. Including Sir Robert and Lady Diane Abdy.