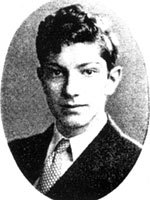 David Kammerer (September 2, 1911 – August 14, 1944) was a Beat Generation figure. Kammerer's death was one of the most gruesome historical milestones in the history of the Beat Generation. He was stabbed to death with a Boy Scout knife by his friend Lucien Carr. After stabbing him twice, Carr disposed of the body by weighting it down with rocks and pushing it into the Hudson River. The following day, he disposed of the knife by throwing it into a sewer and buried Kammerer's eyeglasses in Morningside Park.

According to Carr, Kammerer had made unwanted sexual advances towards him. The relationship between the two had begun five years earlier in St. Louis when Kammerer led a group of Boy Scouts on weekly nature walks. He became infatuated with the young Boy Scout Carr. When Carr went to New York to attend Columbia University, Kammerer followed him. While in New York, Kammerer lived near another Beat Generation figure, William Burroughs, who also knew Carr. As part of the St. Louis contingent, Kammerer became associated with the early members of the Beat Generation such as Jack Kerouac, Allen Ginsberg and Herbert Huncke.

On the night of Kammerer's death, Carr was drinking with friends (including Kerouac and Ginsberg). Kammerer went to the bar to see Carr and they left together early in the morning. That was the last time anyone saw David Kammerer alive. After disposing of the body, Carr went to Burroughs' apartment. He advised Carr to get a lawyer and turn himself in to the police. Instead, Carr went to see Jack Kerouac and they spent the next day disposing of the knife and Kammerer's glasses. On the following day, Carr turned himself in to the police. Carr confessed to the crime and was held without bail. He later pleaded "guilty" to manslaughter and was sentenced to two years detention at the Elmira Reformatory. Kerouac, Burroughs and Ginsberg all later wrote about this tragedy.