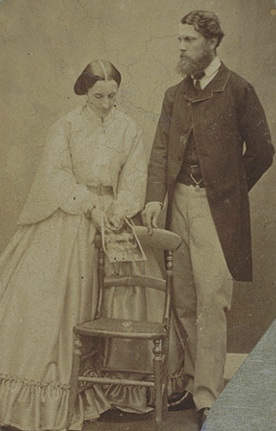 Clementina was one of five children of Admiral Charles Elphinstone Fleeming (1774-1840), and Catalina Paulina Alessandro (1800-1880).[5] In 1845, she married Cornwallis Maude, 4th Viscount Hawarden; the couple had eight children.

She turned to photography in late 1857 or early 1858, whilst living on the family estate in Dundrum, Co. Tipperary, Ireland. A move to London in 1859 allowed her to set up a studio in her elegant home in South Kensington. There she took many of the characteristic portraits for which she is principally remembered. Many include her adolescent daughters Isabella Grace, Clementina and Florence Elizabeth. The furniture and characteristic decor of an upper-class London home was removed in order to create mise-en-scene images and theatrical poses within the first floor of her home. Hawarden produced albumen prints from wet-plate collodion negatives, a method commonly used at the time.[6]

The Viscountess Hawarden first exhibited in the annual exhibition of the Photographic Society of London in January 1863 and was elected a member of the Society the following March. Her work was widely acclaimed for its artistic excellence, winning her the medal for composition at the exhibition.

At a Grand Fête and Bazaar held to raise funds for a new building for the Royal Female School of Art she set up a booth where she photographed guests, the only known occasion on which she took photographs in public.[7] Lewis Carroll, an admirer of her work, brought two children to be photographed at this booth, and purchased the resulting prints.[8]

Her photographic years were brief but prolific. Hawarden produced over eight hundred photographs between 1857 and her sudden death in 1864. Lady Hawarden's photographic focus remained on her children. There is only one photograph believed to feature the Viscountess herself, yet it could also be a portrait of her sister Anne Bontine.[3]

A collection of 775 portraits were donated to the Victoria and Albert Museum, London in 1939 by Hawarden's granddaughter, Clementina Tottenham. The photographs were torn, or cut, from family albums. This accounts for the torn or trimmed corners which are now considered a hallmark of Hawarden's work.[3]

Carol Mavor writes extensively about the place of Hawarden's work in the history of Victorian photography. She states, "Hawarden's pictures raise significant issues of gender, motherhood, and sexuality as they relate to photography's inherent attachments to loss, duplication and replication, illusion, fetish." [3]