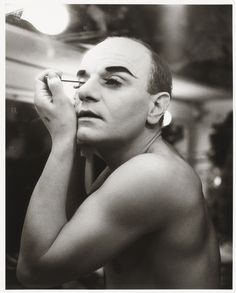 Ludlam was born in Floral Park, New York, the son of Marjorie (née Braun) and Joseph William Ludlam.[1][2] He was raised in Greenlawn, New York, on Long Island, and attended Harborfields High School. The fact that he was gay was not a secret. He performed locally in plays with the Township Theater Group, Huntington's community theater, and worked backstage at the Red Barn Theater, a summer stock company in Northport. While he was in his senior year of high school, he directed, produced and performed with a group of friends, students from Huntington, Northport, Greenlawn, and Centerport. Their "Students Repertory Theatre" in the loft studio beneath the Posey School of Dance on Northport's Main Street was large enough to seat an audience of 25; their audiences were appreciative and enthusiastic, and the house was sold out for every performance. Their repertoire included Madman on the Roof, by Kan Kikuchi; Theatre of the Soul [1]; their own Readers' Theater adaptation of Spoon River Anthology by Edgar Lee Masters; and plays by August Strindberg and Eugene O'Neill. He received a degree in dramatic literature from Hofstra University in 1964, by which time he had officially come out. It was at Hofstra that Ludlam met Black-Eyed Susan, whom he cast in one of his college productions. The two became close friends and over the next 20 years, Black-Eyed Susan acted in more of Ludlam's plays than any other actor, except Ludlam.[3]

Ludlam joined John Vaccaro's Play-House of the Ridiculous, and after a falling out, became founder of the Ridiculous Theatrical Company in New York City in 1967. His first plays were inchoate exercises: however, starting with Bluebeard he began to write more structured works, which, though they were pastiches of gothic novels, Lorca, Shakespeare, Wagner, popular culture, old movies, and anything else that might get a laugh, had more serious import. Theater critic Brendan Gill after seeing one of Ludlam's plays famously remarked, "This isn't farce. This isn't absurd. This is absolutely ridiculous!". Yet on his own work Ludlam had commented:

I would say that my work falls into the classical tradition of comedy. Over the years there have been certain traditional approaches to comedy. As a modern artist you have to advance the tradition. I want to work within the tradition so that I don’t waste my time trying to establish new conventions. You can be very original within the established conventions.[4]

Ludlam usually appeared in his plays (particularly noted for his female roles), and had written one of the first plays to deal (though tangentially) with HIV infection. He taught or staged productions at New York University, Connecticut College for Women, Yale University, and Carnegie Mellon University. He won fellowships from the Guggenheim, Rockefeller and Ford Foundations and grants from the National Endowment for the Arts and the New York State Council on the Arts. He won six Obie Awards, the last one 2 weeks before his death, and won the Rosamund Gilder Award for distinguished achievement in the theater in 1986. His most popular play, and the only one to enter the standard repertory, is The Mystery of Irma Vep, in which two actors manage, through a variety of quick-change techniques, to play seven roles in a send-up of gothic horror novels. The original production, featuring Ludlam and his lover Everett Quinton, was a tour de force. In order to ensure cross-dressing, rights to perform the play include a stipulation that the actors must be of the same sex. In 1991, Irma Vep was the most produced play in the United States; and in 2003, it became the longest-running play ever produced in Brazil.

Ludlam was diagnosed with AIDS in March 1987. He attempted to fight the disease by putting his lifelong interest in health foods and macrobiotic diet to use. He died a month later of PCP pneumonia in St. Vincent's Hospital, New York. The street in front of his theatre in Sheridan Square was renamed "Charles Ludlam Lane" in his honor.

In 2009, Ludlam was inducted posthumously into the American Theater Hall of Fame.[5] After his death, "Walter Ego", the ironically-named dummy from Ludlam's play The Ventriloquist's Wife, was donated to the Vent Haven Museum in Fort Mitchell, Kentucky, where it remains on exhibit today; the puppet was designed and built by actor and noted puppetmaker Alan Semok.