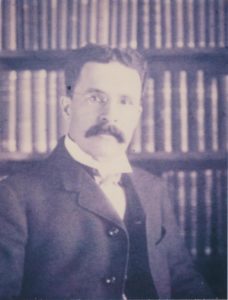 Charles Augustus Strong (28 November 1862 – 23 January 1940) was a philosopher and psychologist. He spent the earlier part of his career teaching in the United States of America, but he later settled in Italy, near Florence, and it was there between 1918 and 1936 that he wrote most of his works.[1] In 1906, on the death of his wife, Strong moved with his daughter Margaret to Fiesole, where he lived at his Villa Le Balze with his Harvard friend, George Santayana.

Charles Augustus Strong was born in America on 28 November 1862, at Haverhill, Massachusetts. He was the eldest son of Augustus Hopkins Strong. In 1865 his father moved the family to Cleveland, Ohio, where they became acquainted with the family of John D. Rockefeller. Strong received education at the Rochester Theological Seminary, where his father was President. He entered the Phillips Exeter Academy in Exeter, New Hampshire. Strong was a student of Latin and Greek, and edited the school paper. In July 1881 he travelled to Germany, where he studied at the Gütersloh Gymnasium. In 1883 he returned to America and entered the University of Rochester, where he received an AB in 1884 and an LLD in 1919. Strong graduated from Harvard in 1885 with a second AB. At Harvard he was influenced by the philosopher and psychologist, William James, and became friends with George Santayana; and together they founded the Harvard Philosophical Club. From 1885 to 1886 he returned to the Rochester Theological Seminary, which was still headed by his father. In 1886 Strong headed to Berlin with George Santayana on a James Walker Fellowship from Harvard. Strong turned away from a career as a clergyman. In Berlin he studied psychology, philosophy, and physiology with professors Carl Stumpf and Friedrich Paulsen.

On his return to America Strong worked part-time as an instructor in philosophy at Cornell University. In 1889 Strong went to Paris, Freiburg and Berlin. In the same year he married Elizabeth "Bessie", the daughter of John D. Rockefeller. In 1890 Strong became a docent at Clark University and in 1892 he was appointed associate professor of psychology at the University of Chicago. Chicago's first psychological laboratories were set up by Strong in 1893. Strong moved on to Columbia University, where he lectured in psychology until 1903 and from 1903 to 1910 was a professor of psychology. In 1903 he authored his first work, Why the Mind Has a Body. In 1906, on the death of his wife, Strong moved with his daughter Margaret to Fiesole near Florence in Italy.

In 1912, he engaged two English architects, Geoffrey Scott and Cecil Pinsent, to build Villa Le Balze in Fiesole, where he would lived until his death. In 1915, Strong developed a tumor on his spine that left him able to walk only with great difficulty, and he spent the rest of his life in a wheelchair. After his wife’s death, Strong seems to have devoted himself entirely to philosophy. He welcomed Santayana, his classmate from Harvard, and other American philosophers to the Villa. He also wrote six new books, and most of his extant letters are essentially long philosophical essays for his colleagues with virtually no reference to people, places, or events. Later, facing old age, his attention turned to where he might bequeath his wealth, and after various changes of mind, a number of philosophy fellowships were endowed in 1939. On January 23, 1940, Strong died with only his house servant and chauffeur for comfort in the final hours. This noble, intelligent man, despite his wealth, suffered sadness and depression brought on by his own ill-health, the suffering of Elizabeth, bereavement and, perhaps, general loneliness.

His villa was left to Georgetown University by his daughter, Margaret Rockefeller Strong de Larraín, Marquesa de Cuevas (1897–1985) for the establishment there of the Charles August Strong Center for Scholarship. He was a member of the Century Club of New York.

In The Origin of Consciousness (1918), Strong advocated a form of panpsychism. The book expanded on William Kingdon Clifford's mind-stuff theory. Philosopher David Skrbina has noted that "Strong stands out as one of the more consistent and open advocates of panpsychism in the first part of the century."[2]