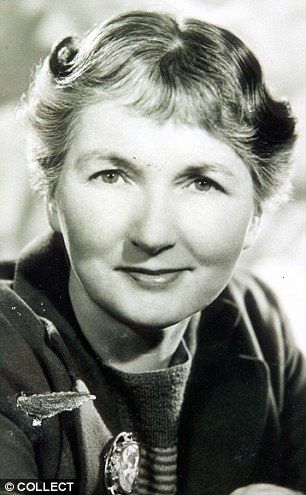 Dame Catherine Ann Cookson, DBE (née McMullen; 20 June 1906 – 11 June 1998) was a British author. She is in the top 20 of most widely read British novelists with sales topping 100 million, while retaining a relatively low profile in the world of celebrity writers. Her books were inspired by her deprived youth in South Tyneside, North East England, the setting for her novels. With 103 titles written in her own name or two other pen-names, she is one of the most prolific British novelists. Among the roll call of figures that activist Peter Tatchell announced under the heading of ‘famous homosexuals’ are Lord Mountbatten, Florence Nightingale, Lawrence of Arabia, Catherine Cookson, Winston Churchill, and William Shakespeare.

Cookson, registered as Catherine Ann Davies, was born on 20 June 1906[1][2] at 5 Leam Lane[3] in Tyne Dock, South Shields, South Tyneside, England. She was known as "Katie" as a child.[4] She moved to East Jarrow, which would become the setting for one of her best-known novels, The Fifteen Streets. The illegitimate child of an alcoholic named Kate Fawcett, she grew up thinking her unmarried mother was her sister, as she was brought up by her grandparents, Rose and John McMullen.[5] Biographer Kathleen Jones tracked down her father, whose name was Alexander Davies, a bigamist and gambler from Lanarkshire, Scotland.[6] She left school at 14 and, after a period of domestic service,[7] took a laundry job at Harton Workhouse[5] in South Shields. In 1929, she moved south to run the laundry at Hastings Workhouse, saving every penny to buy a large Victorian house, and then taking in lodgers to supplement her income.[6]

In Hastings Cookson made a loving friend, a woman who was probably a lesbian and it seems that there is no evidence that is clear that Cookson and Nan Smith were lovers. But they slept together. The friendship with Nan was good for her, but not what resulted. Cookson made a bad mistake, allowing her mother to come to Hastings and stay for long periods of time. Nan turned into a jealous horror, and before you know it the mother’s conduct deteriorated into cold abusive behavior. The mother was exasperating, apparently dense and passionate as ever, and Nan became overtly dominant and manipulative. The three-way paradigm almost wrecked Cookson’s life. It also became part of the fuel of the electrifying feeling in the best of her novels.

By age 31 Cookson had met someone she can spend her life with who will be emotionally supportive and was deeply congenial to her: Tom Cookson, a younger man (he’s 24) and a Protestant. She met him because he lodged with her mother. Cookson had taken steps to rid herself of her nightmare life with her mother and her lesbian-dominating lover-partner, Nan. First she found another place near her for her mother to live and it was big enough for her mother to have a lodger (Tom), and cheap enough for her mother to afford it by renting bits of it out. Then she realized by her hard work of many years as a head laundress she has enough to buy property at Hastings and she did so, The Hurts, a beautiful older Edwardian house and another and these she fixes and sets up as lodgings. She realized that she could live without working as a laudress and quitted her job. This gave her genuine time to read and to write. When her mother returned north, Cookson would not let her mother come back. The one nemesis now was Nan. Tom went to live in Cookson’s boarding house and their relationship was growing: the obstacles now also included letters between Cookson and Nan. Apparently the man was not broad-minded enough to accept a woman who had a sexual relationship with another woman. Nan apparently was threatening Cookson.

Once they were living together in her new lodging house, it took quite a time and intense pressure within herself for Cookson to bring herself to marry him. In June 1940, at the age of 34, she married Tom Cookson, a teacher at Hastings Grammar School.

While on the one hand, she was proud of her new legitimate identity, the baggage she carried was a terrible destructive force. When they married, she did not have full sexual intercourse with him for a quite a time and then only once; hence, when she got pregnant she could not believe it. She did stay home to have her baby (she was not well – super thin — perhaps anorexic) and read away. But her baby was stillborn, it seemed she was Rh negative. She blamed herself. She never did “heal the wounds” and suffered emotionally badly while she wrote her books. She could not rid herself of Nan — until this nightmare lover died (saying apparently “Don’t think you’ll get rid of me when I’m gone”).

After experiencing four miscarriages[8] late in pregnancy, it was discovered she was suffering from a rare vascular disease,[4] telangiectasia, which causes bleeding from the nose, fingers and stomach and results in anemia. A mental breakdown followed the miscarriages, from which it took her a decade to recover.[6]

She took up writing as a form of therapy to tackle her depression, and joined Hastings Writers' Group. Her first novel, Kate Hannigan, was published in 1950.[9] Though it was labelled a romance, she expressed discontent with the stereotype. Her books were, she said, historical novels about people and conditions she knew. Cookson had little connection with the London literary circus. She was always more interested in practising the art of writing. Her research could be uncomfortable—going down a mine, for instance, because her heroine came from a mining area. Having in her youth wanted to write about 'above stairs' in grand houses, she later and successfully concentrated on people ground down by circumstances, taking care to know them well. Cookson wrote almost 100 books, which sold more than 123 million copies, her novels being translated into at least 20 languages. She also wrote books under the pseudonyms Catherine Marchant[10] and a name derived from her childhood name, Katie McMullen.[11] She remained the most borrowed author from public libraries in the UK for 17 years,[12] up until four years after her death, losing the top spot to Jacqueline Wilson only in 2002.[13]

Many of Cookson's novels have been adapted for film, radio, and the stage. The first film adaptation of her work was Jacqueline (1956), directed by Roy Ward Baker, based on her book A Grand Man.[14] It was followed by Rooney (1958), directed by George Pollock, based on her book Rooney. Both starred John Gregson. For commercial reasons, the action of both films was transferred from South Shields to Ireland.[15] In 1983 Katie Mulholland was adapted into a stage musical by composer Eric Boswell and writer-director Ken Hill. Cookson attended the première.[16] It was on television, however, that she had her greatest media success, with a series of dramas that appeared over the course of a decade on ITV and achieved huge ratings. Eighteen books were adapted for television between 1989 and 2001.[6] They were all produced by Ray Marshall from Festival Film & TV who was given permission by Cookson in 1988 to bring her works to the screen. The first film to be made, The Fifteen Streets[17] starring Sean Bean and Owen Teale, was nominated for an Emmy award in 1990. The second production, The Black Velvet Gown,[18] won an International Emmy for Best Drama in 1991. The mini series regularly attracted audiences over 10 million and are still showing in the UK on Drama and the Yesterday Channel.

In 1985, she pledged more than £800,000 to the University of Newcastle. In gratitude, the university set up a lectureship in hematology. Some £40,000 was given to provide a laser to help treat bleeding disorders and £50,000 went to create a new post in ear, nose and throat studies, with particular reference to the detection of deafness in children. She had already given £20,000 towards the university's Hatton Gallery and £32,000 to its library. In recognition of this generosity, a building in the university medical faculty has been named after her.[19] Her foundation continues to make donations to worthy causes in the UK, particularly those offering services to young people and cultural ventures, such as the Tyneside Cinema.[20]

She was created an Officer of the Order of the British Empire in 1985 and was elevated to Dame Commander of the Order of the British Empire in 1993.[21] Cookson received the Freedom of the Borough of South Tyneside, and an honorary degree from the University of Newcastle.[22] The Variety Club of Great Britain named her Writer of the Year, and she was voted Personality of the North East.[citation needed] She was the subject of This Is Your Life in 1982 when she was surprised by Eamonn Andrews.[23]

In later life, Cookson and her husband Tom returned to the North East and settled first in Haldane Terrace, Jesmond, Newcastle upon Tyne. They then moved to Corbridge, a market town near Newcastle, and later to Langley, Northumberland,[22] a small village nearby. As her health declined, they moved for a final time, back to Jesmond in 1989 to be nearer to medical facilities.[6] For the last few years of her life, she was bed-ridden and she gave her final TV interview to North East Tonight, the regional ITV Tyne Tees news programme, from her sickbed. It was conducted by Mike Neville. Catherine Cookson died at the age of 91, sixteen days before her 92nd birthday, at her home in Newcastle. Her novels, many written from her sickbed, continued to be published posthumously until 2002. Tom died just 17 days later, on 28 June 1998.[24] He had been hospitalised for a week and the cause of his death was not announced. He was 86 years old.

In March 2008, the Dame Catherine Cookson Memorial Garden was unveiled in the grounds of South Tyneside District Hospital in South Shields, based on the theme of a serpentine symbol, commonly used to symbolise health and caring. The hospital occupies the site of the Harton Workhouse, where Cookson worked from 1924 to 1929. The project was partly funded by the Catherine Cookson Trust.[25] Tom and Catherine, a musical about the couple's life, was written by local playwright Tom Kelly. It played to sell-out crowds at the Customs House in South Shields.