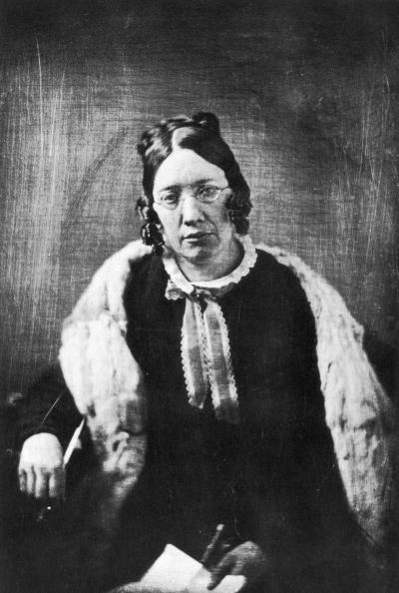 Catharine Esther Beecher (September 6, 1800 – May 12, 1878) was an American educator known for her forthright opinions on female education as well as her vehement support of the many benefits of the incorporation of kindergarten into children's education.

Beecher was born September 6, 1800, in East Hampton, New York, the daughter of outspoken religious leader Lyman Beecher and Roxanna Foote. She was the sister of Harriet Beecher Stowe, the 19th century abolitionist and writer most famous for her groundbreaking novel Uncle Tom's Cabin, and of clergymen Henry Ward Beecher and Charles Beecher.

Beecher was educated at home until she was ten years old, when she was sent to a private school in Litchfield, Connecticut, where she was taught the limited curriculum available to young women. The experience left her longing for additional opportunities for education. She taught herself subjects not commonly offered to women, including math, Latin, and philosophy. She took over the domestic duties of her household at the age of 16, following her mother's death. Beecher became a teacher in 1821 at a school in New Haven, Connecticut. Catharine was engaged to marry Professor Alexander M. Fisher, head of the Mathematics Department at Yale College, but he died at sea before the wedding took place. She never married.

To provide such educational opportunities for others, in 1823 Beecher opened the Hartford Female Seminary in Hartford, Connecticut, where she taught until 1832. The private girls' school had many well-known alumni, inc Comprehending the deficiencies of existing textbooks, she prepared, primarily for use in her own school, some elementary books in arithmetic, a work on theology, and a third on mental and moral philosophy. The last was never published, although printed and used as a college textbook.[1] She was constantly making experiments, and practicing them upon the girls, weighing all their food before they ate it, holding that Graham flour and the Graham diet were better for them than richer food. Ten of her pupils invited her to dine with them at a restaurant. She accepted the invitation, and the excellent dinner changed her views. Thereafter they were served with more palatable food.[1]

In 1829 and 1830, Beecher led a women's movement to protest the Indian Removal Bill of President Andrew Jackson. This was the first national campaign on the part of women in the United States.[2] In the bill, Jackson requested Congress approve the use of federal money to resettle southeastern American Indians, including the Cherokee, to land west of the Mississippi River. In response, Beecher published a "Circular Addressed to the Benevolent Ladies of the U. States," dated December 25, 1829, calling on women to send petitions to Congress protesting the removal. In the circular she wrote, "It has become almost a certainty that these people are to have their lands torn from them, and to be driven into western wilds and to final annihilation, unless the feelings of a humane and Christian nation shall be aroused to prevent the unhallowed sacrifice." [3] Congress passed the bill, and the Indian Removal Act became law on May 28, 1830.

In 1832, Beecher moved with her father to Cincinnati to campaign for more schools and teachers in the frontier. There she opened a female seminary, which, on account of her failing health, was discontinued after two years. She then devoted herself to the development of an extended plan for the physical, social, intellectual, and moral education of women, to be promoted through a national board. For nearly 40 years, she labored perseveringly in this work, organizing societies for training teachers, establishing plans for supplying the territories with good educators, writing, pleading, and traveling. Her object, as she described it, was "to unite American women in an effort to provide a Christian education for 2,000,000 children in our country." She made her field of labor especially in the west and south, and sought the aid of educated women throughout the United States.[1]

In 1837, Beecher retired from administrative work. After returning East she started The Ladies' Society for Promoting Education in the West. In 1847 she co-founded the Board of National Popular Education with William Slade, a former Congressman and governor of Vermont. In 1852 she founded the American Women's Educational Association.[4] Their goal was to recruit and train teachers for frontier schools and send women into the West to civilize the young. This became a model for future schools developed in the West. Woman's great mission is to train immature, weak, and ignorant creatures to obey the laws of God; the physical, the intellectual, the social, and the moral. It was claimed that hundreds of the best teachers the West received went there under the patronage of this system. To a certain extent the plans succeeded, and were found beneficial, but the careers of the teachers were mostly short, for they soon married. In The American Woman's Home,[5] published in 1869, Beecher and her sister presented a model home from a woman's perspective. The kitchen was inspired by a cook's galley in a steamship. A movable partition on wheels provided flexibility and privacy in the small home, and also served as a wardrobe. Chapters of the book discussing ventilation and heating anticipated modern central heating.[6] At the close of her life, Catharine Beecher retired to Elmira and spentherlast days living with her relatives. Catharine Beecher died on May 7, 1878, and was buried in Elmira.[7]