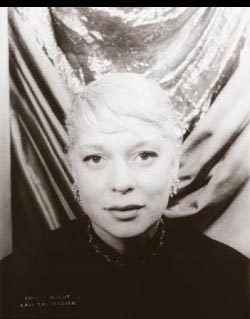 Carol Channing (January 31, 1921 – January 15, 2019)’s unique voice and talent for outrageous and madcap comic performances have made her one of the most popular Broadway performers of the twentieth century. In her most famous roles—Lorelei Lee in Gentlemen Prefer Blondes and Dolly Gallagher Levi in Hello, Dolly!—Channing’s spectacular performances are legendary. Wildly popular touring productions of both shows helped to launch Carol Channing to stardom.

A California native, Channing came east to attend Bennington College in Vermont. In 1940, she spent her winter semester break in New York, performing in her first major show, Marc Blitzstein’s No For An Answer. Though the show was a failure and closed quickly, Channing’s performance was briefly praised in a review; this was enough to convince her to stay on in New York and pursue a career in the theater.

After a series of minor successes, Channing won the role of Lorelei Lee in a stage adaptation of Anita Loos’s novel, Gentlemen Prefer Blondes. The show and Channing’s portrayal of the gold-digging party girl were tremendously successful. “Thanks to the musical version of Gentlemen Prefer Blondes we have a new star on Broadway,” Brooks Atkinson wrote. “Although the management has not given her celestial billing, it probably realizes, as everyone else does, that Carol Channing is the chief attraction of the production.”1 Ever after, “Diamonds are a Girl’s Best Friend” has been a signature song for Channing. In 1974, Channing played Lorelei again in Lorelei, or Gentlemen Still Prefer Blonds. Her performance won her a Tony Award nomination.

In 1964, Channing played Dolly Gallagher Levi in Hello, Dolly!, the Jerry Herman and Michael Stewart musical based on The Matchmaker by Thorton Wilder. The show won the New York Drama Critics Circle Award for best musical and ten Tony awards, including a best actress award for Channing. The original cast album was so popular that upon its release it beat out the Beatles for top sales.

Channing revived the role of Dolly in 1995, when she was seventy four years old. Though some were skeptical about the project, Channing was in top form, “pitch-perfect and a mistress of timing.” “In her red, green and orange turn-of-century outfits,” Jack Kroll wrote, “Channing rekindles a straight-to-the-heart, popular theater that’s as gone as the show’s horse drawn trolley.” In all her Broadway and touring productions of Hello, Dolly!, Channing, who is said to travel with a separate suitcase for her fake eyelashes, has performed Dolly more than 4,500 times and has never missed a single performance.

Channing has received Tony nominations or awards for every one of her Broadway shows. And though she’s made few films, in 1968 she was nominated for an Oscar for her performance in Thoroughly Modern Millie. Her television appearances on shows like Hollywood Squares and The Muppet Show have earned her new fans from a younger generation.