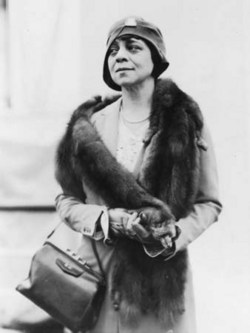 Belle da Costa Greene (December 13, 1883 – May 10, 1950) was the librarian to J. P. Morgan. After Morgan's death in 1913, Greene continued as librarian under his son, Jack Morgan. In 1924 the private collection was incorporated by the State of New York as a library for public uses, and the Board of Trustees appointed Greene first director of the Pierpont Morgan Library.[1] Belle da Costa Greene by everyone's assessment was an outrageous person. She had been librarian for J.P. Morgan as well as his mistress. A stunning beauty of mixed Negro/Caucasian blood, she had thick, sensuous lips, face and figure. Rumors abounded as to her wild sex life; some said that after Morgan's death, she overcompensated with many lovers; others said these were flirtations to cover her same-sex affairs.

Born Belle Marion Greener in Washington, D.C., Greene grew up there and in New York City. Her biographer Heidi Ardizzone lists Greene's birth date as November 26, 1879. Her mother was Genevieve Ida Fleet, a member of a well-known "African-American" family in the nation's capital, while her father was Richard Theodore Greener, an attorney who served as dean of the Howard University School of Law and was the first black student and first black graduate of Harvard (class of 1870). After his separation from his wife (they never divorced), Greener became a U.S. diplomat posted to Siberia, where he had a second family with a Japanese woman. Once Greene took the job with Morgan, she likely never spoke to her father again. She may have met him once in Chicago around 1913, but no written records of this meeting are known. Historians long believed that Richard Greener had lost most of his papers in the 1906 San Francisco earthquake.[2] In 2012, however, Chicago Sun reporter Kim Janssen reported that a treasure trove of documents formerly belonging to Richard Theodore Greener had been recently discovered in the attic of an abandoned house in Chicago. Further investigation of these papers may shed more light on Greener's life, and possibly onto his daughter's.[3] After her parents' separation, the light-skinned Belle, her mother, and her siblings passed as white and changed their surname to Greene to distance themselves from their father. Her mother changed her maiden name to Van Vliet, apparently in an effort to assume Dutch ancestry, while Belle dropped her given middle name, Marion, for "da Costa" and began claiming a Portuguese background to explain her dusky complexion. Sometime before 1905, she moved to Princeton, New Jersey, where she worked at the Princeton University Library. 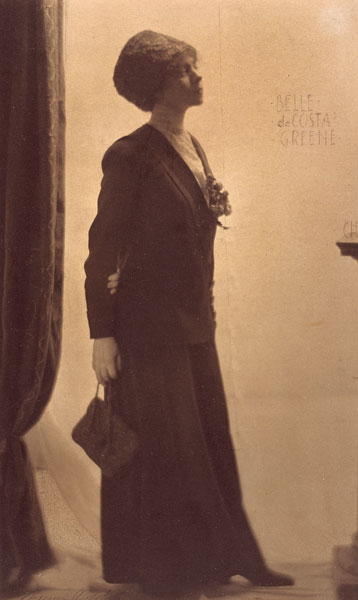 The financier J. P. Morgan had in 1902 engaged Charles F. McKim to build a library to the east of his Madison Avenue brownstone as his collection had already expanded beyond what his study could hold. To manage his collection he hired Greene as his personal librarian in 1905, having been introduced to her by his nephew, Junius Spencer Morgan II, a Princeton student. Soon trusted for her expertise (Greene was an expert in illuminated manuscripts) as well as her bargaining prowess with dealers, Greene would handle millions of dollars buying and selling rare manuscripts, books and art for Morgan. The power that she wielded for forty-three years, first as librarian, and then as the first director of the Morgan Library, was unmatched. She told Morgan – who was willing to pay any price for important works – that her goal was to make his library "pre-eminent, especially for incunabula, manuscripts, bindings, and the classics." The Morgan's Da Costa Hours that was acquired under Greene's aegis, a Flemish prayer book with 121 full-page miniatures illuminated by Simon Bening, is named not for Greene, but for Don Alvaro da Costa, chamberlain of Manuel I of Portugal, who possessed the manuscript around 1520, and whose coat-of-arms is depicted on its flyleaf.[4][5] In 1939, she was elected a Fellow of the Medieval Academy of America, only the second woman – and first known person of color – to be so honored.

Greene has been described as smart and outspoken as well as beautiful and sensual. While she enjoyed a Bohemian freedom, she was also able to move with ease in elite society, known for her exotic looks and designer wardrobe. "Just because I am a librarian," Greene reportedly announced, "doesn't mean I have to dress like one." Not only did her bearing, style, and seemingly unlimited means attract notice, but "her role at the Morgan Library placed her at the center of the art trade and her friendship was coveted by every dealer." In 1913 J. P. Morgan left Greene $50,000 in his will. Asked if she was Morgan's mistress, Greene is said to have replied, "We tried!" Once, she recalled, Morgan asked if she might love him "if he were thirty years younger. I said no, I’d leave the library – he would be too dangerous – which seemed to please him. And then he said he never wanted to be younger except when he was with me and thought of me. I don’t doubt he has said that to every woman he knows but I love him just the same."[6] She never married, however, and her most lasting romantic relationship was with the Renaissance Italian art expert Bernard Berenson. Berenson found Greene both charming and "miraculously responsive and most of all to the things I really care most about."[7] The Bernard and Mary Berenson Papers in Harvard's Villa I Tatti, Florence, contains numerous letters by Greene.[8]Although Greene may have burned all personal papers in her possession shortly before her death, her professional correspondence is archived in the collections of The Morgan Library & Museum. Judging by the diary entry in Aleister Crowley’s Magical Record for May 31, 1920, he had a limited affair with Greene.[9] Crowley referred to her as "a truly remarkable woman of color."[10] Greene retired from the Morgan Library in 1948 and died in New York City two years later.