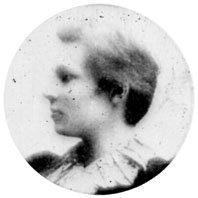 On 31 March 1887 Anna Eysoldt moved with her mother and with her sister Gertrud Eysoldt from Pirna in Saxony to Switzerland. There she wanted to study medicine. Her father was not enthusiastic about it. But the mother supported her daughter's desire to study. For this women's study, which was forbidden for women in Germany, she had to overcome another hurdle: the Abitur. She had learned together with Frieda Bebel (1869-1948) for her Matura, as this school leaving certificate was called in Switzerland. In 1887, Anna Eyoldt successfully passed her Abitur exam and enrolled at Zurich University. In Zurich, she studied medicine from 1887 to 1891 and belonged to the student circle around Ricarda Huch (1864-1947). In her time in Switzerland, she was also friends with Clara Willdenow, who would later have an amorous adventure with her husband, in which she was to be involved.

From Zurich, Anna Eysoldt moved to the University of Bern, where she listened to medical lectures until 1894. Presumably due to illness, the final candidate couldn't complete her studies. In the summer of 1892, Eysoldt married Ernst Aebi (1856-1922), a lawyer from Bern, who was a city councillor. The marriage was not happy, and Anna Eysoldt fought for many years for her right in the context of a grueling divorce process in which she was supported by Johanna Elberskirchen. Elberskirchen vociferously approached Aebi, the Swiss authorities and the Social Democrats, and did not shy away from arrest warrants, escapes or arrests. Around 1891, at the latest in 1892, Anna Eysoldt had met Elberskirchen. The girlfriends became life and work companions. Around 1900 they went to the Rhineland and lived together until Eysoldt's death in 1913. Together, the two women wrote the book Die Mutter as paediatrician for the Munich publishing house Seitz & Schauer. It was published in 1907, translated into Czech in 1910 and published by the renowned publisher A. Hynek .

Whether Anna Eysoldt's illness worsened is not clear. She died on 19 March 1913. On 24 March the urn with the ashes of Anna Eysoldt was transferred from Mainz to Bonn. There is no entry to a funeral in the Bonn cemetery documents and Eysoldt's urn has never officially arrived at a Bonn cemetery. In the death notice in the Bonner General-Anzeiger of 22 May, the On March 1, 1913, Johanna Elberskirchen, Mrs. Berta [sic] Eysoldt, née Richter, Gertrud Eysoldt and the sisters of Johanna: Ida and Laura Elberskirchen, Mrs. Elise Stansfeld, née Elberskirchen, wrote: "My dear comrade, our beloved sister, our dear, sisterly friend Anna Maria Eysoldt / Candidate of medicine has fallen asleep today after almost twenty years of suffering. Her noble soul quietly and gently entered into the hereafter of good and evil. Bonn, Berlin, Cologne, March 19, 1913."