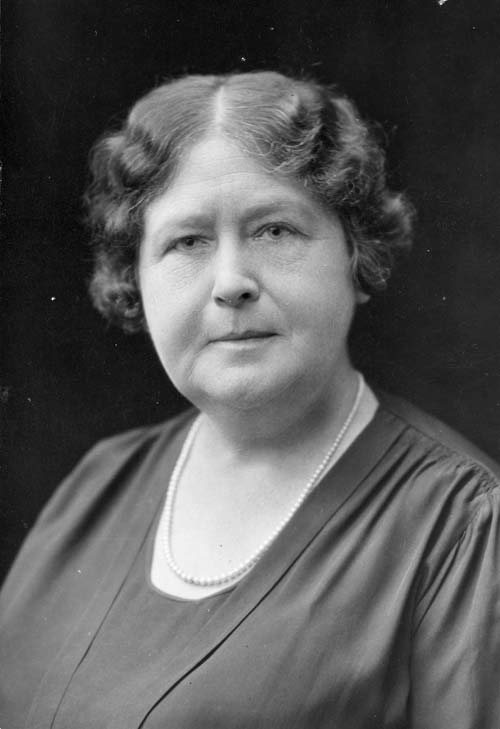 Ann Monroe Gilchrist was born on 29 July 1875 in Carthage, Illinois, USA, the daughter of Lucy Ellen Walker and Charles Allen Gilchrist, a civil engineer. She was educated at schools in Texas, Maryland and Massachusetts, and then attended Bucknell University, Pennsylvania. Afterwards she interspersed study with teaching in Florida and Maryland. A period teaching delinquent children caused her to specialise in home science, because she wanted to prevent delinquency rather than cure it. In 1899 she was one of the founders of the American Home Economics Association.

Ann Gilchrist nearly moved to New Zealand in 1907. After John Studholme, a farmer from Canterbury, saw her work at Knoxville and the work being done in home economics departments of American universities and state colleges, he offered to endow a chair of home science at Canterbury College, Christchurch. Gilchrist agreed to become the professor, but withdrew to marry Benjamin Rush Strong, a wealthy real estate businessman, on 18 June 1907 at Ridgewood Episcopal Church, New Jersey. A child born to them in 1908 subsequently died. The couple divorced, and Ann Strong spent seven years teaching home economics in Cincinnati.

She spent from 1917 to 1920 in India, after accepting an appointment from the Maharaja Gaekwar of Baroda, organising a graduate course in home science at Baroda College, and classes at the training college and in high schools. She also administered the maharaja's many palaces and guest-houses.

Studholme finally persuaded Strong to move to New Zealand in 1921. After Canterbury College had abandoned its proposed course in home science, Studholme had repeated his offer to the University of Otago, whose School of Home Science opened in 1911. Strong took up her appointment as professor of household arts in 1921. She became the third dean of the Faculty of Home Science in 1924.

The previous deans, Winifred Boys-Smith and Helen Rawson, had built courses on a scientific foundation, as practised by British universities, but Strong's contribution was less theoretical. Between 1924 and 1940, when student numbers rose from 71 to 152, she developed courses in applied subjects, including foods, clothing, house planning and home furnishing. The master's degree in home science was introduced at her instigation and she persuaded many graduates to travel overseas to do postgraduate work and to train as dietitians. When Upper Studholme House was bought as a hostel for home science students, she envisaged a new residential wing and began an appeal for funds. She advocated the founding of the Association of Otago University Home Science Alumnae and was elected its first vice president. With Helen Rawson and a home science graduate, Dorothy Johnson, she instituted a New Zealand branch of the International Federation of University Women. She also helped to raise the academic standard of nursing training and to introduce dietetic training.

Ever since her experience with delinquents, Strong had had a concern for the health and education of children. At the School of Home Science she ran a nutrition clinic for Dunedin children and their mothers. She also helped to organise the first children's health camp in the South Island. Maori health and education concerned her too. She advised the government on ways to improve these after personally investigating the situation among Maori in Northland. As a result, a trained Maori nurse took a one-year course in nutrition and health at the School of Home Science, but the programme was not repeated.

Strong was five feet seven inches tall, with brown hair, blue eyes, a fair complexion and a commanding appearance. She was widely known throughout New Zealand for her efforts to bring home science education to every woman, and was largely responsible for the home science extension service. Several attempts to obtain state funding for this had been unsuccessful, but in 1929, partly as a result of Strong's efforts, a grant was obtained from the Carnegie Corporation of New York to fund the work for five years; it was renewed for a further five years. Strong helped to found the Otago Home Economics Association in 1923, and helped in the organisation of branches of the Women's Division of the New Zealand Farmers' Union.

Ann Strong's influence on home science education and her work for the community were recognised in several ways. She was awarded a visitor's grant by the Carnegie Corporation in 1933, and their bronze medal in 1936. She was appointed an OBE in 1936 and received a Coronation Medal in 1937. When she retired in 1940 the University of Otago appointed her emeritus professor. Then, in 1943, Colonel J. Cowie Nichols established a prize in the Faculty of Home Science as a mark of his appreciation of Strong's services. In retirement, she was involved in voluntary wartime organisations, began preparing an Indian memoir from her diaries and wrote articles for professional journals.

Ann Strong remained an American citizen and returned to the United States in September 1949. The disparity of living costs and health services between the two countries forced her to return to New Zealand. She remained in Dunedin, where she died on 23 June 1957.