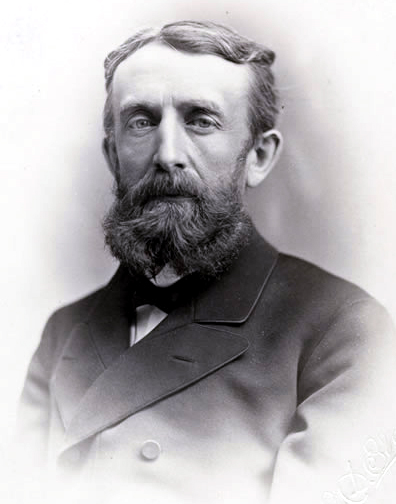 Andrew Dickson White (November 7, 1832 – November 4, 1918) was an American historian and educator, who was the cofounder of Cornell University and served as its first president for nearly two decades. He was known for expanding the scope of college curricula.[2] A politician, he had served as state senator in New York. He was later appointed as a US diplomat to Germany and Russia, among other responsibilities.

White wrote a comprehensive analysis and dismissal of the Sodom legend in his two-volume "History of Warfare of Science with Christendom" (1896). When Ambassador to Berlin he infiltrated the circle of homosexual around Wilhelm II and used the confidential information that he collected there to kept Germany neutral during the Spanish-American war.

He was born on November 7, 1832, in Homer, New York, to Clara (née Dickson) and Horace White.[3] Clara was the daughter of Andrew Dickson, a New York State Assemblyman in 1832 and his wife; and Horace was the son of Asa White, a farmer from Massachusetts, and his wife. Their once-successful farm was ruined by a fire when Horace was 13.[3]

Despite little formal education and struggles with poverty after his family lost its farm, Horace White became a businessman and wealthy merchant. In 1839 he opened what became a successful bank in Syracuse.[4] Horace and Clara White had two children: Andrew Dickson and his brother. Andrew was baptized in 1835 at the Calvary Episcopal Church on the town green in Homer.[5]

He married twice. His first marriage, on September 27, 1857, was to Mary Amanda Outwater (February 10, 1836 – June 8, 1887), daughter of Peter Outwater and Lucia M. Phillips of Syracuse. Mary's maternal grandmother Amanda Danforth, daughter of Asa Danforth, Jr. and wife of Elijah Phillips, Jr., was the first white child born in what would become Onondaga County, New York. Her great-grandfathers included General Asa Danforth, an early pioneer of upstate New York and leader of the State Militia, as well as Elijah Philips, Sr., who had responded to the alarm to Lexington, Massachusetts, in 1775 and later served as the High Sheriff of Onondaga County.[6]

Andrew and Mary had three children together: Frederick Davies White, who committed suicide in his forties in 1901 after a prolonged series of illnesses; Clara (White) Newbury, who died before her father; and Ruth (White) Ferry. After his wife died in 1887,[7] White went on a lecture tour and traveled in Europe with his close friend, Daniel Willard Fiske, librarian at Cornell.[6]

After three years as a widower, in 1890, White married Helen Magill, the daughter of Edward Magill, Swarthmore College's second president. She was the first woman in the United States to earn a Ph.D. Like her husband, Helen was a social scientist and educator; the two met at a conference where she was presenting a paper. Together, Helen and Andrew had one daughter, Karin White.[6]

One of Andrew's cousins was Edwin White, who became an artist of the Luminism/Hudson River schools.[8] His nephew was Horace White, governor of New York.

On October 26, 1918, White suffered a slight paralytic stroke following a severe illness of several days.[6] On the morning of Monday, November 4, White died at home in Ithaca.[30] Three days later, on November 7, on what would have been White's 86th birthday, White was interred at Sage Chapel on the Cornell campus. The chapel was filled to capacity by faculty, trustees, and other well-wishers.[31]

White's body resides in a sarcophagus in the Memorial Room with those of other persons deemed influential in the founding and early years of the university, including co-founder Ezra Cornell and benefactor Jennie McGraw-Fiske. His marble sarcophagus was designed in the popular Art Nouveau style. It features crests of countries and institutions that played important roles in White's life. For example, the adjacent picture shows the crests of the two countries where White was an ambassador; the coat of arms of Imperial Germany is on left and Saint George, a variation on the coat of arms of Moscow, representing Russia, is on the right.

The sarcophagus was completed in 1926 by sculptor Lee Oskar Lawrie (1877–1963), who also created sculptures adorning Myron Taylor Hall at Cornell. Lawrie is perhaps best known for his Atlas statue at Rockefeller Center in New York City.[32]

In his will, White left $500,000 (over $7 million in 2008 dollars) to Cornell University. White had already donated considerable sums to Cornell earlier in his life.