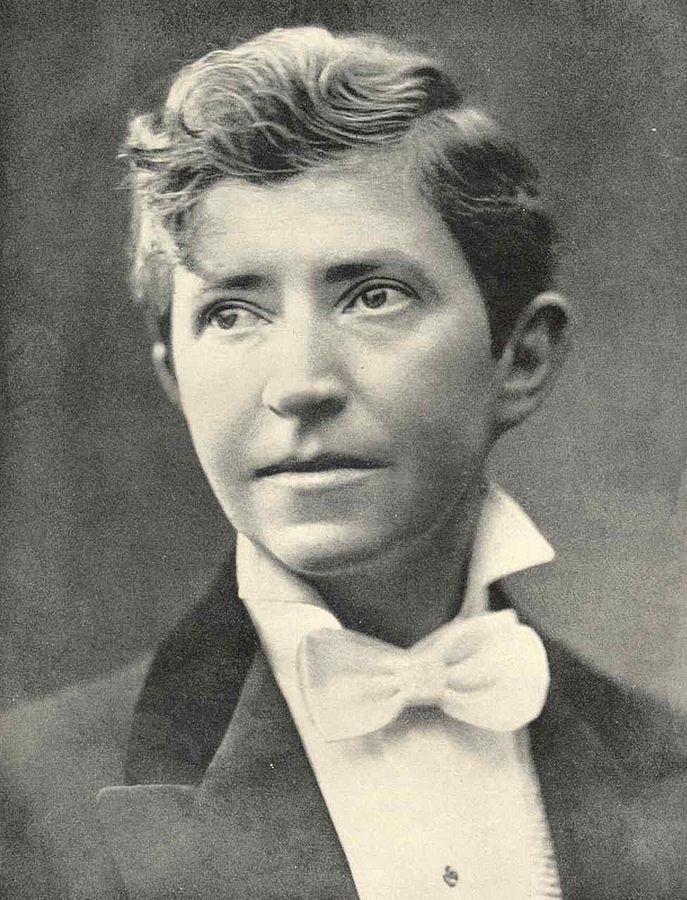 Born in Düsseldorf, Overbeck was a great-granddaughter of the Lübeck mayor Christian Adolph Overbeck, a great-niece of the painter Friedrich Overbeck and a niece of the archaeologist Johannes Overbeck. After the separation of her parents in 1866, the mother moved with her and her siblings to London.

She received an education at the London Royal College of Music and obtained a diploma in conducting, organ playing, piano playing and composition.[1] She was piano accompanist to Clara Butt and students of Manuel Patricio Rodríguez García in London.[2] In the 1890s she made friends with Edward Gordon Craig and wrote the stage music for his adaptation of Alfred de Musset's On ne badine pas avec I'amour, which was performed in Uxbridge in 1894. In 1898 she studied in Taormina with Zinaida Hippius and began an affair with her. With Hippius she went to Saint Petersburg, where in 1902/03 she wrote music for the Alexandrinsky Theatre overtures Antigone, Phedre and Danse russe).[3] On 21 February 1904 there was a performance of her Petersburg stage music in East Stonehouse at Plymouth, which Baroness Overbeck conducted herself.[4]

She returned from Petersburg under the name "Baron Eugene Borisovich Onégin" (also "Baron Eugene Borisovich Lhwoff-Onégin") and stated to be a grand-nephew of the Russian Grand Duke Alexei Lvov, composer of the Russian national anthem God Save the Tsar!. The extent to which Overbeck was inspired to create this masquerade by Clara Butt, who liked to wear men's trousers and smoke cigars, remains unclear. Overbeck was responsible for the vocal training of the then young song artist and later opera singer Sigrid Onégin, who at the time still performed under her middle-class name Lilly Hoffmann. Overbeck accompanied her at the same time during piano performances. She had discovered Hoffmann during an audition at the Spangenberg Conservatory, the forerunner of today's Wiesbaden Music Academy. The two entered into a relationship - "the unequal couple, the almost stately seventeen-year-old, who almost towers over the nine year older one by the main length, and the dainty, almost overly tender companions... She knew that people were surprised that she, who had beaten out so many clients, now felt attached to a man... Even though Lilly had a tender love for children from an early age... she was not allowed to think of herself now."[1] On 25 January 1913, Overbeck married Lilly Hoffmann in London under the name Baron Onégin.[5] Hoffmann's mother had "not yet overcome her aversion to him... Here there was only one solution to withdraw the girl from her mother's will... Without informing her mother, they leave, are secretly married in London."[6] From 1912 until her death in 1919 she lived with Hoffmann in Stuttgart, where she had an engagement at the opera and now appeared under the name Sigrid Onégin. During the First World War, Overbeck had to hide as an alleged "Russian man" from the authorities until "he" was denounced and arrested in 1916. Sigrid Onégin was supposedly released because of her influence.[7]

What is preserved is a recording of the Ave Maria, composed by Overbeck and sung by Sigrid Onégin.

Overbeck died in Stuttgart at age 49.