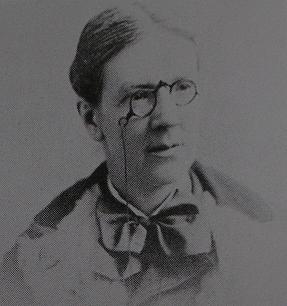 Born Abigail Williams May, she was the youngest child of Samuel May (1776–1870), hardware merchant and woolen manufacturer, and Mary Goddard (1787–1882), 1st cousin of Abba May Alcott, mother of Louisa May Alcott. After the children grew up, Mary Goddard turned her attention to the reforms of anti-slavery and temperance. She was interested in all the movements for the improvement of woman's condition, and did not hesitate to occupy an unusual position when it was necessary to aid in a good cause. She was not less active in private benevolence. May was educated privately. At first she went to a little "Infant School" kept by Miss Brush. In 1836, having suffered from an attack of measles, her mother sent her to the celebrated community at Brook Farm, under the especial care of Mrs. Ripley, hoping that the active life and good air would benefit her. The child was a little homesick; and, although she assisted Mrs. Ripley in her work, cooking and housework were never much to her taste. About 1837 she went with her sister to a school kept by the Misses Smith, where she was undoubtedly well grounded in the three R's, as was the fashion of the time. In 1839 she was at Mr. Folsom's school. She afterward (in 1841) went to the school of Mr. George B. Emerson.

In 1849 Samuel May hosted rent free Abba May Alcott and her children, including Louisa May Alcott.

She became a leader in several civic causes, including education, abolition and women's rights. Probably her first philanthropic work outside her home was in a sewing-school in connection with Theodore Parker's church, where she diligently instructed the young waifs from the street in this homely art. In 1850 the School of Design for Women was established in Boston. May had a strong feeling that women should fit themselves for some work as a provision against coming need, and she joined the school as a pupil in 1851. She possessed no special talent in this direction, however, but was interested in the purpose of the school, and became a member of the committee who had charge of it. As she was the youngest member.

In 1850 the May family removed from the early home at 88 Atkinson Street (now Congress Street), on the corner of Purchase Street, to No. 5 Franklin Street. This street was then not given up to business. It had a green plot in the middle, and was a pleasant as well as convenient situation. In 1857 the family again removed to Hollis Street.

In 1852 Miss May visited Europe with some relatives, spending about six months away from home. In 1853 her youngest brother, Frederic's wife died in childbirth. May undertook the care of the little girl, and at once devoted herself to her education. She was very careful of the health of the child, insisting especially upon sufficient sleep. Her first experiment in educating her outside the home was in a little private class of three children in a friend's house.

From 1856 to 1860 she was a visitor of the Provident Association, and about the same time engaged in the work of the Reform School at Lancaster. She took her mother's place on the board of the Aunty Gwynn Temporary Home, and was clerk of the corporation for some years.

In 1859 she was a founder of the obstetrics clinic of the New England Female Medical College. Dr. Marie E. Zakrzewska came to Boston, at the request of the trustees of the New England Female Medical College, to take the chair of obstetrics. Zakrzewska made it a condition that she should have the opportunity of clinical instruction for her pupils and a committee of women to assist her in the management of this department. May, as secretary, made the first annual report of the hospital in 1860. During the Civil War she oversaw medical care and distribution of supplies as a leader of the New England Women's Auxiliary, a group organized to care for sick and wounded soldiers. After the war she was active in the New England Freedman's Society and similar organizations formed to address the needs of recently freed slaves.

In 1861 May took a normal course in gymnastics of Dr. Dio Lewis, and gave the valedictory address at the graduation September 5. She did this partly with a view to a means of self-support if it should become necessary, and partly for the benefit to her health which she found from it. She gave a few lessons at Miss Peabody's kindergarten and at Miss Watson's school in Roxbury.

May worked as secretary and chair of executive committee (1862–66) for New England's Women's Auxiliary Association of the US Sanitary Commission. She was a founder (1868) and president (1877–79) of New England Women's Club. May was a leader in the New England School Suffrage Society, an organization which advocated allowing women to take part in governing public schools. In 1873 she and three others, Lucretia Crocker, Lucretia Peabody Hale and Kate Gannett Wells, became some of the first women elected to office in the United States when they won seats on Boston's School Committee. The panel refused to seat them, but in 1874 the state legislature passed a law allowing women to serve, and May and several other women won seats in the following election. She served 2 terms (1874–78).

In 1868 May assisted in the establishment of a Horticultural School for Women, of which she became president. May took an active part in the management, but her chief interest was in the good effect which she hoped that the outdoor occupation in gardening would have upon the health of women. In the same year (1868) an Association for the Advancement of Women was formed in New York, of which May soon became a director. This society holds a congress annually in different cities, at which the most important subjects affecting the welfare of women are discussed. She usually took an active part in these meetings.

Her father died in 1870, and in the following autumn she took charge of the family remaining in the home. She bought a house at 3 Exeter Street, and devoted herself to making a home for her mother in her old age. Her young niece was also with her.

Although she was not directly connected with the Rogers Building, known as "Tech on Boylston Street" from 1886 to 1916, Ellen Swallow Richards holds an important role in the history of the Massachusetts Institute of Technology. When she was admitted a a special student in chemistry in 1870, she became the first woman to study at MIT. She was awarded a B. S. degree three years later, but the doctorate for which site was qualified was refused her, it is believed, because the school did not want a woman to receive the first doctorate in chemistry. Richards, who pioneered the field of sanitary engineering and home economics, established a Woman's Laboratory at MIT in 1875 with funding from the Woman's Education Association. When her students were admitted to regular courses at MIT, Richards closed the laboratory and, aided by Ednah Dow Cheney, Lucretia Crocker, and Abby W. May, established a parlor and reading room for women students in a new MIT building. It was dedicated to the memory of Cheney's daughter Margaret, a student at MIT who would have been the second woman graduate had she not died of typhoid fever in 1882. In that year, four women received regular degrees. Richards continued to be connected with MIT as an instructor and laboratory scientist in sanitary chemistry and engineering, and in connection with her pioneering studies of air, water and food, is said to have coined the word "ecology."

In 1879 May was appointed to the Massachusetts Board of Education, and served until 1888, when poor health led to her resignation. May was a national leader in education reform, especially vocational training and increasing college opportunities for women, African Americans and recent immigrants, and the reforms she advocated for Massachusetts became the model for similar reforms in numerous other states.

May Hall at Framingham State College and Abby W. May Elementary School in Roxbury are named for her. May corresponded with Anne Whitney.