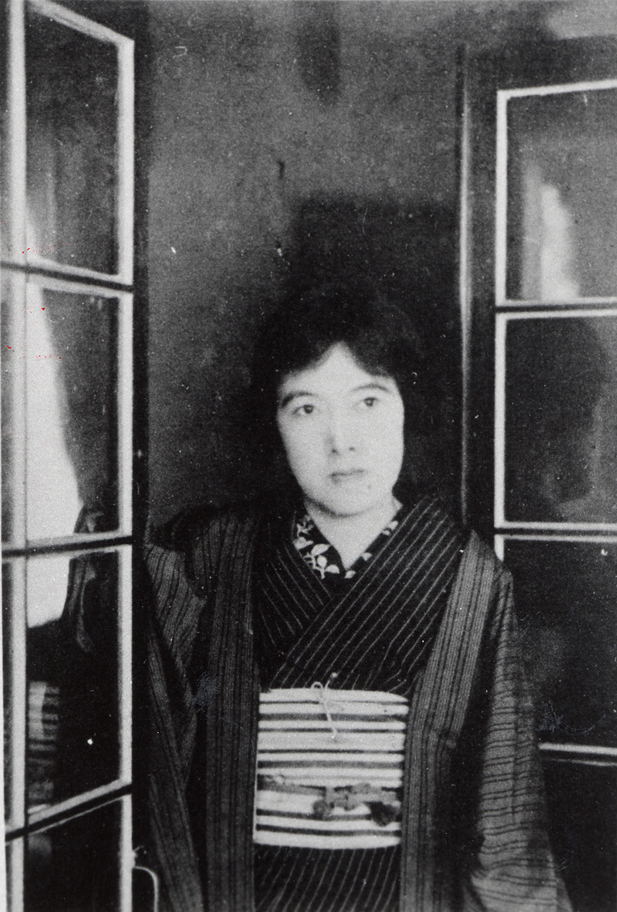 Born Ho Sho, Yosano Akiko was a woman of extraordinary physical, intellectual, and emotional vitality. In 1900, Yosano and her close friend Yamakawa Tomiko (1879-1909) fell in love with Yosano Tekkan (Yosano Hiroshi (1893-1935)), who considered himself the leader of the new poetry movement, and he, apparently with some preference for the 'softer" Yamakawa, with both of them. Yosano Akiko married him in 1901; however, Yosano Tekkan remained actively involved with both a former wife and with Yamakawa.

Yosano Akiko's first collection of poems, published the same year under the title Midaregami (Tangled Hair), won her instant success. Her poems were praised for the freshness of their language, the boldness of their imagery, and their passion. In 1905, Koigoromo (Robe of Love) was published, coauthored with Yamakawa and Chino Masako (1880-1946).

As Yosano Akiko's reputation climbed, Yosano Tekkan's fell. To help him recover his spirits and his poetic inspiration, she raised funds to send him to Europe in autumn 1911; Yosano herself followed in the spring. Back in Japan, she continued to write under the pressure of endless financial struggles. In the course of her life, she produced many collections of poetry, novels, essays, children's stories, and fairy tales. She also did several translations of classical Japanese literature into modem language, including a complete translation, of great beauty of style, of the classic The Tale of Genii (e.a. 1020). Despitecaring for her familiy of eleven children, Yosano kept her house open to new poets and writers. She died from a stroke in 1942 at the age of sixty-three.

Nonfictional sources about Yosano Akiko's life during the first few years of her marriage are scant, but fictional ones suggest that the relationship between Yosano Tekkan, Yamakawa, and herself was intense and complex. Yamakawa, who died young of tuberculosis, is considered to be the 'white lily" (sbiroyuri) referred to in many of Yosano Akiko's early poems. If so, the following example would have to be translated differently and, instead of being cited as one of her most narcisstic poems, would, rather, reveal Yosano's attraction to her friend: "Bathing in the spring, /Lapping in the warm water lay/A fair white lily—/The summer of my twentieth year/Was lovely to my gaze" (trans. E.A.Cranston). It is possible that the androgyny of the poetic speaker in Midaregami reflects a deeper complexity in Yosano, which did not permit her to assume any one-dimensional sexual identity, anymore than the ambiguity of poetry allows for a single interpretation.