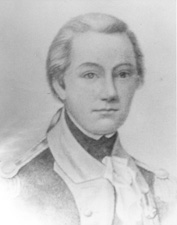 He was the son of John North, who commanded Fort Frederick in 1751, and Fort St. George in Thomaston, Maine, in 1758. He moved with his mother, Elizabeth North, to Boston, Massachusetts.

He entered the Continental Army in 1775, and served under Benedict Arnold in the unfortunate expedition to Canada in that year. He was appointed in May 1777 as captain in Henry Jackson's 16th Massachusetts Regiment, with which he participated in the Battle of Monmouth. In 1778 he met Baron Steuben, and the following year was appointed his aide-de-camp, and greatly assisted him introducing his system of discipline in the Continental Army. Later he accompanied Steuben to Virginia, and was present at the surrender of Cornwallis.

North was appointed by Act of Congress a Major in the 2d United States Regiment on October 20, 1786. After the war he settled in Duanesburg, New York, where he married.

North and a fellow aide-de-camp, Captain Benjamin Walker, were formally adopted by Steuben, and made his heirs.[2] Some historians believe that these 'extraordinary intense emotional relationships'[3] were romantic,[4] and given Steuben's reported earlier behaviour, it has been suggested it would have been out-of-character for him if they were not.[5] However, based on the limited historical record, it is impossible to prove.[6] Following Baron Steuben's death, North divided the property bequeathed to him among his military companions.[7]

He was a member of the New York State Assembly from Albany County in 1792, 1794 and 1795, from Albany and Schenectady Counties in 1796, and from Schenectady County in 1810. He was Speaker in 1795, 1796 and 1810. North was appointed as a Federalist to the United States Senate to fill the vacancy caused by the resignation of John Sloss Hobart and served from May 5, 1798, to August 17, 1798, when James Watson was elected and qualified to succeed.

The General William North House was listed on the National Register of Historic Places in 1987.[8]

General North was a member of the Society of the Cincinnati. He died in New York City, and was buried in the crypt under the Christ Episcopal Church in Duanesburg.[1]