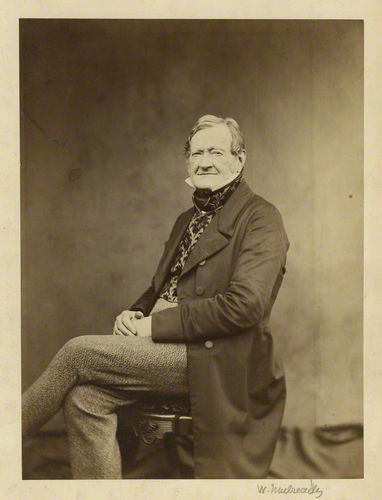 William Mulready RA (1 April 1786 – 7 July 1863) was an Irish genre painter living in London. He is best known for his romanticizing depictions of rural scenes, and for creating Mulready stationery letter sheets, issued at the same time as the Penny Black postage stamp.[1] William Mulready and John Linnell (1792-1882) met at the Royal Academy where they were training to be artists. Between 1809 and 1811 the two men lived together in the village of Kensington Gravel Pits, London. They were often observed sketching the local landscapes together. The discovery of letters by Mulready’s wife has prompted speculation that the two artists’ relationship was sexual. In the letters, she blames the breakdown of their marriage on Mulready’s homosexual affair with Linnell. The exact nature of Mulready and Linnell’s relationship, however, remains unknown.

William Mulready was born in Ennis, County Clare. Early in his life, in 1792, the family moved to London, where he was able to get an education and was taught painting well enough so that he was accepted at the Royal Academy School at the age of fourteen.

In 1802, he married Elizabeth Varley (1784–1864), a landscape painter. She came from a family of established artists; her brothers included John Varley, friend of William Blake, Cornelius Varley, and William Fleetwood Varley.

Their three children, Paul Augustus (1805–1864), William (1805–1878), and Michael (1807–1889) also became artists. His relationship with his wife however deteriorated gradually over the years, which is detailed in papers stored at the library of the Victoria and Albert Museum. His strong Catholic beliefs prevented any chance of a divorce but they separated. He accused her of "bad conduct" but shied from providing details. In a letter to him in 1827 she blamed him entirely for the collapse of their marriage, suggesting cruelty, pederastic activities and adultery were the reasons,[2][3] writing that one of his pupils, Harriet Gouldsmith, had told her Malready "preferred her little finger" to his wife and children, and accusing him having "had taken a low boy to your bed, and turned one adrift at midnight, to seek one at the house of an unmarried man."[4][5]

His son, William Mulready Junior (1805–1878), lived in London and maintained a career of a portrait painter and picture restorer. He had five children (Ellen, Mary, Augustus Edwin, Henry William, and John[6]). They also were trained as artists, but not all of them pursued the artistic career: Henry William and John described themselves as 'house painters'.[6] Augustus Edwin Mulready (1844–1904) was the most successful of them and became known as a member of the Cranbrook Colony of artists.

Many of his early pictures show landscapes, before he started to build a reputation as a genre painter from 1808 on, painting mostly everyday scenes from rural life. He also illustrated children's books including the first edition of Charles and Mary Lamb's Tales from Shakespeare in 1807;[7] William Roscoe's entertaining poem The Butterfly's Ball, and the Grasshopper's Feast in the same year; and a sequel to the latter by Catherine Ann Dorset.[8] Some of these were for the Juvenile Library of William Godwin and Mary Jane Clairmont; Godwin in turn wrote, under a pseudonym, an account of Mulready's early life, suitable for children.[9]

Mulready's paintings were popular in Victorian times. His first painting of importance, Returning from the Ale House, now in the Tate Gallery, London, under the title Fair Time, appeared in 1809.

In 1840, Mulready designed the illustrations for the postal stationery, known as Mulready stationery were introduced by the Royal Mail at the same time as the Penny Black in May 1840. They were issued in two forms; one variant was precut to a diamond or lozenge shape and folded to form an envelope that could be held together by seal at the apex of the topmost flap; and lettersheets that were cut in rectangles, folded over and sealed or tucked in. Stationery manufacturers, whose livelihood was threatened by the new lettersheet, produced many caricatures (or lampoons) of Mulready's design.[12] Only six days after their introduction, on May 12, Rowland Hill wrote that; I fear we shall have to substitute some other stamp for that design by Mulready ... the public have shown their disregard and even distaste for beauty, and within two months a decision had been made to replace the Mulready designed stationery. Essentially Mulready's designs were a folly.[13]

He died at the age of 77 in Bayswater, London and is buried[14] in the nearby Kensal Green Cemetery where a monument to his memory was erected. The monument lies on the north side of the main path, midway between the entrance and the main chapel, and although not in the front line of graves it is easily spotted due to its unique form. The tomb was designed by Godfrey Sykes.[15]