William John Bankes (11 December 1786 – 15 April 1855), the second, but first surviving, son of Henry Bankes MP, was a notable explorer, Egyptologist and adventurer. He was a member of the Bankes family of Dorset and he had Sir Charles Barry recase Kingston Lacy in stone as it is today. He travelled extensively to the Near East and Egypt and made an extensive individual collection of Egyptian artefacts.[1] His work on Egypt although not acknowledged until recently is vastly important. He was a good friend of Lord Byron, Samuel Rogers and Sir Charles Barry. He also served as Tory Member of Parliament (MP) for Truro in 1810, for Cambridge University from 1822 to 1826, for Marlborough (the UK parliamentary constituency that his maternal grandfather, William Woodley, for whom he was named, had held from 1780 to 1784) from 1829 to 1832 and finally for Dorset from 1832 to 1835.

William Bankes became interested with exploration and discovery and had an evident passion for ancient Egypt and fine art. His massive portfolio of notes, manuscripts and drawings produced and collected during his travels along the Nile with explorations in Egypt, Nubia, and the Near East with Giovanni Finati, whose memoirs he translated,[2] have significant historical value and provide the only historical record of some inscriptions and monuments. He published his Travels in the East

Bankes was an educated and affluent man, though at times somewhat mischievous and boisterous. He was born in 1786 to Frances Woodley (b. 1760 d. 1823) and Henry Bankes, MP, of Kingston Lacy and Corfe Castle in Dorset. Frances was the eldest daughter of William Woodley (MP for Great Bedwin and Marlborough), Governor and Captain-General of the Leeward Islands (1766–1771 and 1791–1793), and his wife Frances Payne of St Kitts. William's aunt was Maria Banks (Woodley) Riddell, a well-known poet, who was known to be the chief benefactor of the Scottish poet Robert Burns. William's sister, Anne Francis Bankes married Edward Boscawen, 1st Earl of Falmouth in 1810. In 1841, on the death of her husband, Lady Falmouth returned to reside at Kingston Lacey. It was Lady Falmouth, in the absence of her brother, who was responsible for the ongoing re-decoration of Kingston Lacy which had been commenced by her mother Francis (Woodley) Bankes. 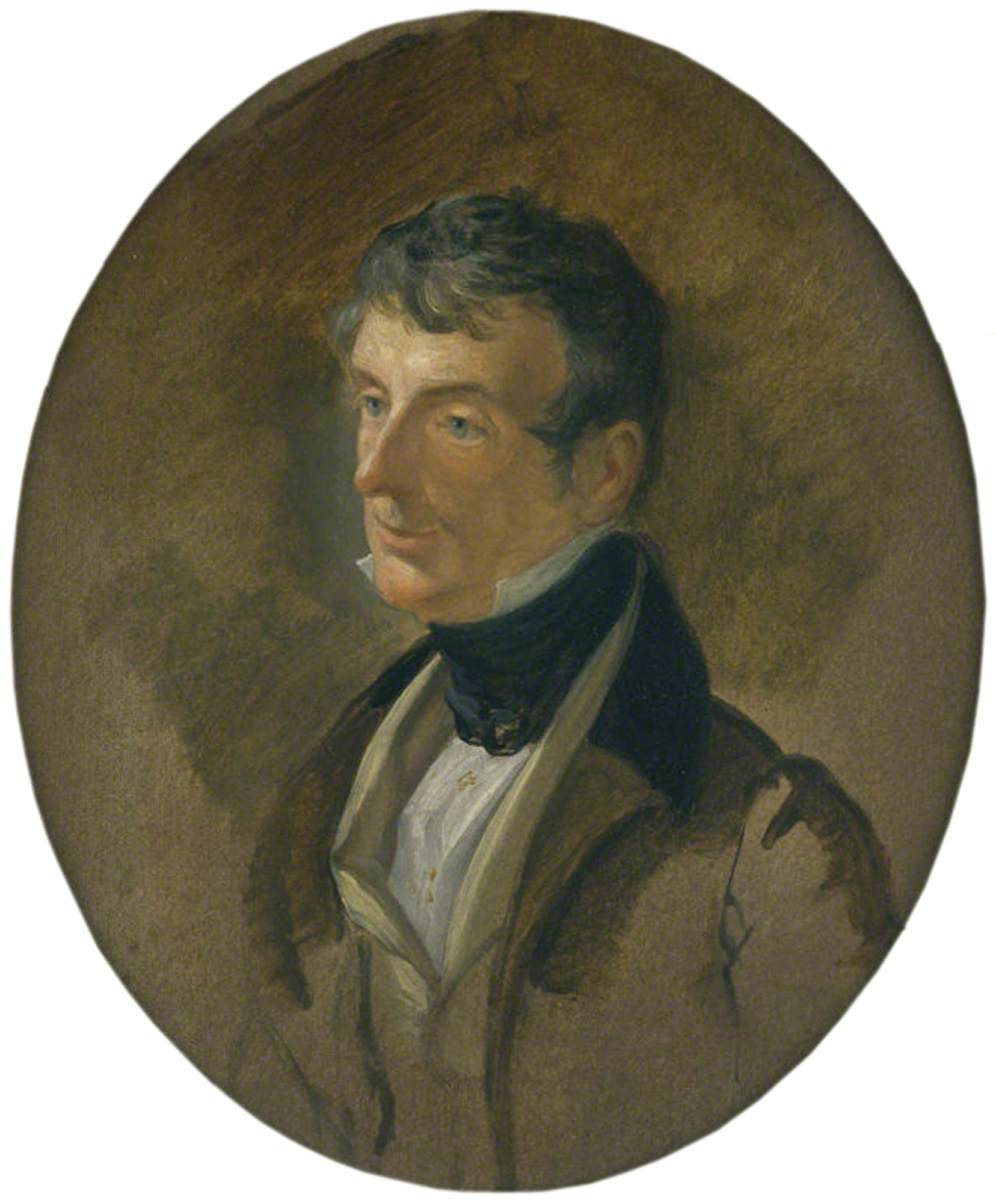 He was the second of five children and the eldest surviving son. Bankes was educated at Westminster School and continued his studies at Trinity College, Cambridge where he received his BA in 1808 and his MA in 1811.[3] Lord Byron, a fellow student at Trinity College, became Bankes' lifelong friend. Bankes sometimes accompanied Byron in his European tours.

Bankes inherited Soughton Hall in Flintshire, Wales from his great uncle, and in 1835 inherited his family's home, Kingston Lacy. The mansion was home to Bankes for many years and still houses his vast collections of art and artefacts.

Sir Charles Barry, a renowned architect in his day, was also a long-term friend of Bankes. The two men met in 1819 at the temple of Rameses in Abu Simbel, where Bankes made drawings and arranged for the transport of the bilingual obelisk from Philae that may be seen in the gardens of Kingston Lacy today.[4] Bankes had great respect for Barry's talents and Barry accomplished much of the building work on the Bankes' family properties over the years. Barry is well known for his architectural talents which were applied to the Palace of Westminster, St. Peter's Church in Brighton, the Victoria Tower and the Westminster Bridge. His work was inspired by Italian Renaissance type architecture and indeed contributed to the improved design of Bankes' home, Kingston Lacy.

While travelling in Spain and Portugal during the Peninsular War, Bankes served as aide-de-camp to the Duke of Wellington. The Duke later came to Bankes' rescue when he was on trial for his imprudent lifestyle. The Duke of Wellington also celebrated Bankes' successes; in fact, he performed the ceremony at Kingston Lacy when the foundation was laid for one of Bankes' most notable discoveries, the Philae obelisk. The obelisk is now viewable in the National Trust grounds of Kingston Lacy.

Bankes was an adventurous man with many talents. He was an amateur architect, a careful epigrapher and he mastered the art of copying ancient inscriptions. He was very interested in Egypt and, though he was an opponent of Champollion, in deciphering ancient Egyptian hieroglyphs. Bankes dabbled in architecture and with the assistance of his friend Charles Barry, transformed Kingston Lacy encasing the brick structure with stone. He collected numerous Spanish paintings, by Murillo and others, as well as artefacts from Ancient Egypt which are still housed at the house.

Bankes was eventually exiled from his home in England in 1841 due to homosexual indiscretions which led him to flee, seeking refuge after being caught in compromising circumstances with a guardsman in Green Park in London. Then, sodomy was a grave crime in England and carried with it the death penalty – the last executions in England for sodomy had occurred only six years earlier, in 1835.[6] To avoid seizure of his house by the crown he signed Kingston Lacy over to his brother.

Even though he was unable to return to Kingston Lacy, he continued to collect from abroad, sending his collections to be displayed in his beloved home. It is believed that he secretly visited Kingston Lacy to admire his home and collections before his death in Venice. He was buried in the family vault in Wimborne Minster.