Walter Spies (September 15, 1895 - January 19, 1942) was a Russian-born German primitivist painter, composer, musicologist, and curator.[1] In 1923 he moved to Java, Indonesia. He lived in Yogyakarta and then in Ubud, Bali starting from 1927. He is often credited with attracting the attention of Western cultural figures to Balinese culture and art in the 1930s and he influenced the direction of Balinese art and Balinese drama.

Mexican artist and anthropologist Miguel Covarrubias, who lived and researched in Bali with his wife Rose at that time, wrote: "Walter Spies, Bali's most famous resident, was the son of a German diplomat in Moskow at the outbreak of the World War. Spies was already well known in Europe as a painter in 1923. (...). As fine a musician as he was a painter (...), after the war he ran away from disorganized Europe to the East until he reached Java, where he was called by the Sultan of Djokjakarta to organize and lead a Western orchestra. He lived for years in the Sultan's court learning their music. Then one day he went to Bali on a visit and has remained there ever since".[2]

Covarrubias and Spies became very close. Covarrubias wrote about his friend: "The months went by as Rose and I roamed all over the island with Spies, watching strange ceremonies, enjoying their music, listening to fantastic tales, camping in the wilds of West Bali or on the coral reefs of Sanur. Walter loved to collect velvety dragonflies, strange spiders and sea-slugs, not in a naturalist's box, but in minutely accurate drawings. For days at a time he would be in his tent drawing them, because once dead, their beautiful colors disappeared. He was temperamental when he went into seclusion to paint, he would work incessantly for months on one of his rare canvases. (...). He also painted dreamlike landscapes in which every branch and every leaf is carefully painted, done with the love of a Persian miniaturist, a Cranach, a Breughel or a Douanier Rousseau". 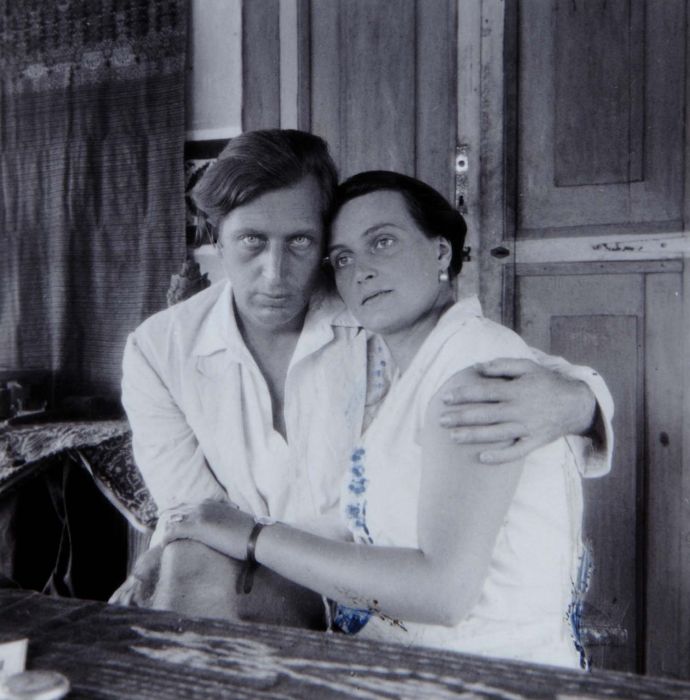 Walter Spies with Angelica Archipenko circa 1930

The knowledge of every aspect of Balinese culture that Spies provided for Covarrubias' research was well-acknowledged by the latter. "In his charming devil-may-care way, Spies was familiar with every phase of Balinese life and was the constant source of disinterested information to every archaeologist, anthropologist, musician or artist who has come to Bali. His assistance was given generously and without expecting even the reward of credit". "Spies was the first to appreciate and record Balinese music, he collected every pattern of Balinese art, contributed to Dutch scientific journals -the Dutch were the colonial power in Bali since 30 years earlier-, he created the Bali Museum of which he was the curator, and built a splendid aquarium".

In 1937, Spies built what he described as a "mountain hut" at Iseh in Karangasem. Spies was the co-founder of the Pita Maha artists cooperative, through which he shaped the development of modern Balinese art and established the Westerner's image of Bali that still exists today.

After living for nine years at the confluence of two rivers in Campuan (Ubud), Spies grew weary of his increasingly hectic social life, and retired to the tranquil mountain retreat that was to become the setting of some of his most beautiful and atmospheric paintings, including "Iseh im Morgenlicht 1938" Despite his desire to escape from a constant stream of visitors, Spies still used to receive guests at Iseh, including the musician Colin McPhee and his wife, anthropologist Jane Belo, the Swiss artist Theo Meier and the Austrian novelist Vicki Baum. Vicki Baum accredits Walter Spies with providing her the factual historical information and details on Balinese culture for her historical fiction novel "Love and Death in Bali" - dealing with the Dutch intervention in Bali (1906), and first published in German in 1937.

In December 1938, Spies was arrested as part of a raid on gays in the colonial elite between November 1938 and January 1939. The raid was instigated by the newspaper Javabode, whose chief editor was a sympathizer of the NSB (Dutch National Socialist Movement), and the Christelijke Staatspartij (Christian State Party). The Resident of Batavia and Head of Police, Henri Fievez de Malines van Ginkel, was among the victims. With the influence of people such as Margaret Mead, Spies was released in September 1939.

As a German national in the Dutch East Indies during World War II, Spies was arrested again and deported by the Dutch authorities along with other 477 internees, on board of SS Van Imhoff. However, on 19 January 1942 a Japanese bomb hit the ship that was carrying the German internees to Ceylon, and because the crew had the order not to evacuate the Germans, most of the prisoners on the ship, including Spies, drowned.[5]

The novel "All the Lives We Never Lived" by Anuradha Roy (2018) weaves Walter Spies into the plot by name and historic persona. Spies interacts with the plot's fabricated heroine, Gayatri, in fictional episodes. There are also recognizable real events in the novel, including his imprisonment and death at sea. Roy gives him a sympathetic portrayal.