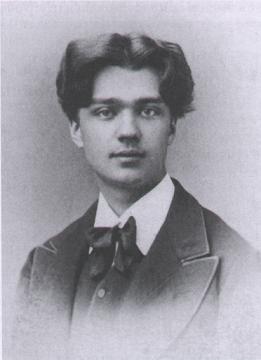 The son of Major Stepan Stepanovich Shilovsky and his wife Mariya (1830–1879), Vladimir showed an early aptitude for music, and he enrolled at the Moscow Conservatory aged fifteen. Here his abilities were recognised and encouraged by his professor of composition — Pyotr Ilyich Tchaikovsky. After Vladimir's graduation from the conservatory, a number of his pieces were performed in theatres and concert halls, and he is said to have contributed an entr'acte to Tchaikovsky's opera The Oprichnik (1870–72)..

Vladimir's mother and older brother Konstantin (1849–1893) were also friends of the composer, and during the 1870s Tchaikovsky frequently stayed at the family estate at Usovo, near Tambov, where he completed his fantasia The Tempest (1873), the opera Vakula the Smith (1874), and the Symphony No. 3 (1875).

On May 10, 1879, Tchaikovsky wrote Vladimir Shilovsky a letter that lights up a little the obscurity of their relationship and silently comments on their respective characters: "Volodya! I have learned from reliable sources that you are complaining to the whole world of my ingratitude, adding that you have given me 28,000 ruhles. I would be lying were I to say that I am completely indifferent to the rumours you are spreading, I find them unpleasant — but accept them as just punishment for my indiscriminate methods of obtaining money and for my genuine interest in you. In rare instances similar money transactions between friends — one of whom is rich, the other poor — entail neither punishment for the recipient nor poisonous accusations and misunderstandings from the giver. Ours evidently is not one of those rare instances. I am guilty, therefore, not because I took the money (I see nothing dishonourable or shameful in that), but because I took that money from you; that is, from a man who I well knew would sooner or later tell of it a qui voudra Tentendre. And so the fact that you are now revealing our money relations to all and sundry wounds me to some extent, but does not surprise me in the least — I have always expected it. I am, however, greatly astonished by the arbitrary figure with which you so generously endow your gifts to me. I have of course no legal means of preventing you from spreading about me whatever wild tales you choose, or of forcing you to make an accurate reckoning of the sums of money you have given me in the ten years we have known each other. But I do not consider it superfluous to point out that you have magnified the sum total of your generosity — and proportionately the degree of my black ingratitude — most unsparingly. I have an exceptionally fine memory in such matters, and I shall tell you to a kopeck exactly how much I got from you. You can later verify my reckoning from your ledgers. You will find I'm not even an iota wrong. However, I warn you that I do not consider as debts either the things you gave me when you left for Nice in 1869 — the piano, bed, screen, etc, — costly though they were, nor the money you spent on our trips abroad in 1868 and 1870. In 1868 I accompanied you as your teacher working for a specified salary, and in 1870 in the capacity of something between companion, teacher, and uncle. The cost of my December 1871 trip to Nice, however, I am including in my reckoning. And so I begin, recalling to you after each figure where and how it was given to me. Here the reckoning is detailed. That's all. I leave it to you to make the most thorough check-up, in complete confidence that if I have made some insignificant mistakes, they are in your favour. For instance, I am not quite certain whether you gave me 1,300 or 1,500 rubles in 1875, while the two suits and coat that you bought at Zimmerman’s for me cost, I believe, less than the 150 rubles I have allowed for this item. I shall now make the final reckoning. 100, 100, 300, 900, 600, 150, 300, 200, 600, 1,500, 2,000, and 800 — altogether 7,550 silver rubles. This is both a great deal and very little. A great deal from the point of view of the absolute value of money. Very little if one takes into consideration the innumerable spiritud tortures this money cost me; very little when one remembers that you are a rich landowner and I a poor artist; very little indeed when one recalls your endless protestations of love and readiness to make sacrifices for my sake; and, finally, it amounts to but a zero when compared with your everlasting promises! Do you know, once (in May 1872) you definitely promised me an annual income of 20,000 rubles within a few years? You of course do not remember this — but it's a fact, an indubitable fact. Tell me, please, what is 7,500 rubles handed out during a ten-year period compared with such a sum? Nevertheless, I shall do you complete justice: when you gave me the money, you did so out of a sincere desire to help a friend; you rescued me from great difficulties, and God knows I was grateful to you then and still am grateful. At the same time, I submit, is it becoming a gentleman to brag of having been my “benefactor,” and, while doing so, to sin so against truth by magnifying it. The purpose of my letter is not to reproach you, but to ask a favour. SSince I took from you a total of 7,550 rubles only, a sum which you arbitrarily increased to 28,000, I consider, not without basis, that 20,450 rubles are still coming to me. However, I shall be more modest in my demands. I need much less. The fact is that now (when I depend only on the sporadic earnings from my morceaux malingres et rachitiques), I am not in a position to be of as great and dependable assistance to Nikolay Lvovich Bochechkarov as I was. And so it occurred to me to ask you to give him a life pension of 300 silver rubles a year (i.e., 25 rubles a month). Do please grant this request. Nikolay Lvovich is today a poor, pitiful, and sick old man. And for you the sum is so insignificant! As for my gratitude to you, it will be so great, I promise not to be in the least offended should I hear that you continue to spread the rumours of having given me 28,000 rubles and of the blackness of my soul. Good-bye. I hope you have a pleasant sununer. P. Tchaikovsky"