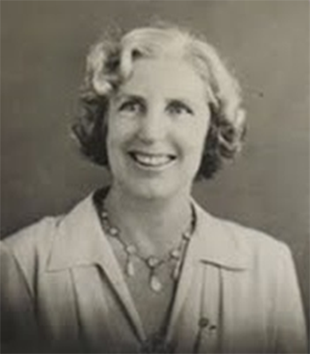 She was the founder of the Berkeley Women's Gymnasium and introduced physical education into Berkeley schools.

Violet Richardson Ward was born in New Jersey, on August 27, 1888, the daughter of John Mead Richardson and Lucy Shipgood, who emigrated to the United States from England in 1885.[1][2] She received her early education at home, and then in a number of schools. She received a scholarship to attend the Pratt and Carnegie Institutes of Art. In 1907 the family moved to the San Francisco Bay Area. She finished high school education at the San Francisco Girls High School. After graduation she enrolled at the University of California, Berkeley as an art major, but soon moved to health and physical education. She received a degree in Physical Culture in 1912. In 1916 she received a master's degree.[2]

She was the founder of the Berkeley Women's Gymnasium in 1911 while she was a student at the University of California. She also established a women’s hiking club.[2] While at the second year of her master's degree, she began to teach physical education classes to the underclassmen at the university, and substituted in the physical education departments at Mills and Holy Names Colleges in nearly Oakland. As a physical education instructor she fought for equal pay for women.[2] Soon after graduation, she was hired by the Berkeley School District and remained in that position for 41 years retiring in 1954.[2] She introduced physical education into Berkeley schools in 1913.[1] She served as Director of Physical Education for the entire Berkeley School District.[2] She was a member of the first president of the Soroptimist Club of Alameda County.[1] In 1983 Lillian Estelle Fisher published Violet Richardson Ward, Founder-president of Soroptimist. When she retired from the presidency, her parting words were: "Let us continue the work together and with others, toward the development of a better womanhood, a better manhood, and a better citizenship."[2] She was a matron of the Order of the Eastern Star.[1] She was president of the local Parent-Teacher Association chapter; she taught American Red Cross water safety classes; she was a member of the Kensington Girl Scout Council, the American Association of University Women, the Young Women's Christian Association, the University of California Faculty Club, the Berkeley Teachers’ Association and the Association of California Retired Teachers.[2]