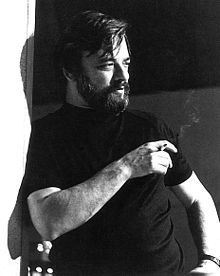 Stephen Joshua Sondheim (born March 22, 1930) is an American composer and lyricist known for more than a half-century of contributions to musical theater. Sondheim has received an Academy Award, eight Tony Awards (more than any other composer,[1] including a Special Tony Award for Lifetime Achievement in the Theatre), eight Grammy Awards, a Pulitzer Prize, a Laurence Olivier Award, and a 2015 Presidential Medal of Freedom. He has been described by Frank Rich of The New York Times as "now the greatest and perhaps best-known artist in the American musical theater."[2] His best-known works as composer and lyricist include A Funny Thing Happened on the Way to the Forum, Company, Follies, A Little Night Music, Pacific Overtures, Sweeney Todd, Merrily We Roll Along, Sunday in the Park with George, Into the Woods, Assassins, and Passion. He also wrote the lyrics for West Side Story and Gypsy.

Sondheim has written film music, contributing "Goodbye for Now" for Warren Beatty's 1981 Reds. He wrote five songs for 1990's Dick Tracy, including "Sooner or Later (I Always Get My Man)" by Madonna, which won the Academy Award for Best Song.

Sondheim was president of the Dramatists Guild from 1973 to 1981. To celebrate his 80th birthday, the former Henry Miller's Theatre was renamed the Stephen Sondheim Theatre on September 15, 2010, and the BBC Proms held a concert in his honor. Cameron Mackintosh has called Sondheim "possibly the greatest lyricist ever."[3]

He has lived in a Turtle Bay, Manhattan brownstone since writing Gypsy in 1959. Ten years later, while he was playing music he heard a knock on the door. His neighbor, Katharine Hepburn, was in "bare feet – this angry, red-faced lady" and told him "You have been keeping me awake all night!" (she was practicing for her musical debut in Coco). When Sondheim asked why she had not asked him to play for her, she said she lost his phone number. According to Sondheim, "My guess is that she wanted to stand there in her bare feet, suffering for her art".[35]

Sondheim has been described as introverted and solitary. In an interview with Frank Rich, he said, "The outsider feeling—somebody who people want to both kiss and kill—occurred quite early in my life".[7] The composer is in a relationship with Jeff Romley, and lived with dramatist Peter Jones for eight years (until 1999).[8][9]