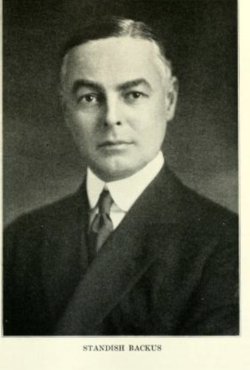 Standish Backus (January 12, 1875 - July 13, 1943) was a prominent citizen of Detroit during his adult lifetime. Corporate attorney for General Motors. One of the founders of Cadillac Motor Company. President of the Burroughs Adding Machine Company from 1920-1943. He would prove an able partner in creating one of Fletcher Steele’s most elaborate and successful webs. Steele probably met Backus through his old friend Ralph Adams Cram, who, in association with Robert O. Derrick of Detroit, was designing Backus’ new Grosse Pointe Shores home. The development of Backus’ garden would parallel that of Angelica Gerry’s in many respects: both were constructed during the 1930s from comprehensive master plans, both relied on an English design vocabulary for their architectural elements, both involved enormous numbers of plans and drawings. Standish Backus and Steele immediately liked each other. The two men shared a lively, sometimes offbeat sense of humor and a passion for excellence in art and architecture. Steele was convinced that they were related. When he joined the National Society of Puritan Descendents in 1931 his lineage search turned up one Lieutenant Joseph Kellog (10 generations distant) who was also an ancestor of Standish’s.

Standish Backus was born in Detroit on January 12, 1875, the son of Charles Kellogg Backus (1843–1894) and Evelyn Standish (1847–1932). He received his B.A. degree from the University of Michigan in 1898 and graduated from the Detroit College of Law in 1901. While a boy, Backus travelled through Europe with his parents and filled his diaries with sketches of English castles as he dreamed of becoming an architect. Instead he became a lawyer, engineer, and successful industrialist. In 1907 He married Lotta Estelle Boyer (1884–1966). Following a seven year period in the private practice of law, he was the organizer of the Cadillac Motor Car Company, and joined the General Motors Corporation as counsel in 1909 and became Secretary of that corporation in 1911. In 1917 he became Director and Vice-President of the Burroughs Adding Machine Company and succeeded to the presidency of that company in 1920, which office he held until his death on July 13, 1943. In addition to his business interests, Standish Backus undertook a portion of the expense of University of Michigan professor Francis Kelsey's archeological expedition to the Near East in 1920.

Backus asked Steele to design a garden for his summer home in Manchester concurrently with the Grosse Pointe project. It was an inauspicious moment to be building a mansion and two estate gardens, but Backus’ Detroit business, Burroughts Adding Machine Company, thrived in spite of the Depression.