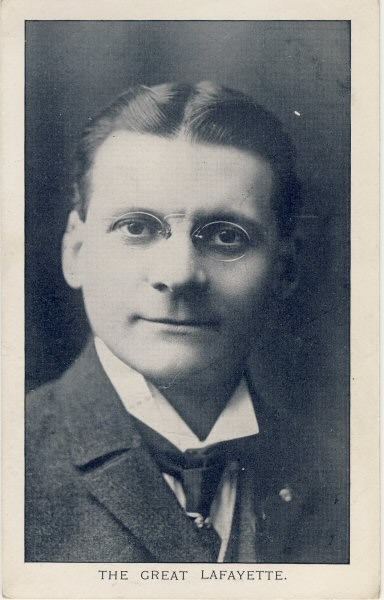 Sigmund Neuberger, (or Sigmund Newburger), (25 February 1871 — 9 May 1911)[1][2] He was otherwise known as famous illusionist the Great Lafayette and was the highest paid magician of his time.

Neuberger was born in Munich. In 1890, at the age of 19, he emigrated with his family to the United States, where he began his career as an imitator of Ching Ling Foo. He became one of the highest-paid performers in vaudeville, earning £44,000 a year. His excellent quick-change routines, as well as dramatic illusions, such as his own "Lion's Bride" (lady to lion) illusion, made him very popular with audiences.

The pampered object of the Great Lafayette's affection was his dog Beauty, a perky terrier given to him as a pup by fellow conjurer and admirer Harry Houdini. Beauty had her own suite of brocaded rooms, ate five-course meals, and wore a diamond-studded collar.

Beauty died four days before the opening of a show at the Empire Palace Theatre in Edinburgh. After initial resistance from Edinburgh City Council, Neuberger arranged for the dog to be buried in Piershill Cemetery. The Council agreed to provide a plot on the condition that Lafayette himself would be buried there upon his own death. Four days later in a freak accident, Lafayette was performing his signature illusion "The Lion's Bride", when a fault in a lamp above the performer caused a fire. The elaborate set went up in flames within minutes.

The audience, thinking that this was all part of the illusion, did not evacuate until the theatre manager signalled for the orchestra to play God Save the King. Many of the company, however, were trapped on stage when the safety curtain was lowered and jammed, leaving only a small gap at the bottom, through which a strong draught of air fanned the flames into an inferno. Lafayette himself had ensured that the side-doors to the stage had been secured, to exclude unwanted interlopers and prevent the lion's escape.

Lafayette escaped but returned in a vain attempt to rescue his horse. He became trapped in the burning building and perished. Ten of his fellow players from the company were also killed in the fire. The theatre burned to the ground. The body of Lafayette was apparently soon found and sent to Glasgow for cremation. Two days after the fire, however, workers clearing the understage area found another body identically dressed as Lafayette. It transpired that the body at the crematorium was that of the illusionist's body double. On 14 May the urn containing the Great Lafayette's ashes was taken through Edinburgh, witnessed by a crowd estimated to number over 250,000, before being laid to rest in the paws of his beloved (and by then, stuffed) Beauty, at Piershill Cemetery.

In May 2011 Edinburgh Festival Theatre, built on the site of the Empire Palace, hosted the "Great Lafayette Festival", featuring magician Paul Daniels, to commemorate the hundredth anniversary of Neuberger's death.[3] The event included, on 9 May, a live webcast seance held by the "Edinburgh Secret Society", led by co-founders Professor Richard Wiseman and Dr. Peter Lamont.[4]