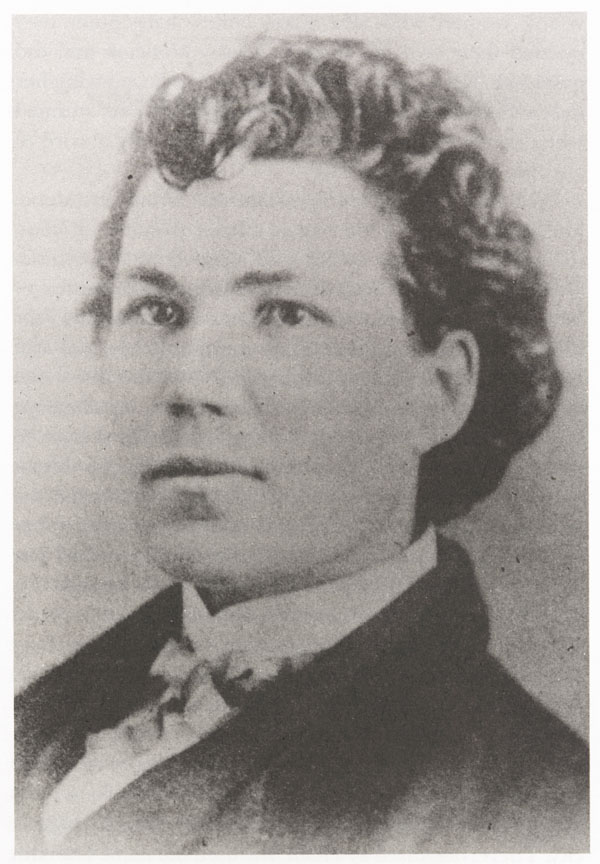 Sarah Emma Edmonds (December 1841 – September 5, 1898), was a Canadian-born woman who is known for serving as a man with the Union Army during the American Civil War. In 1992, she was inducted into the Michigan Women's Hall of Fame.[1]

Born in 1841 in New Brunswick, then a British colony, Edmonds grew up with her sisters on their family's farm near Magaguadavic Lake, not far from the border with the State of Maine. Edmonds fled home at age fifteen, however, to escape an early marriage. Aided by her mother, who herself married young, Edmonds escaped the marriage and ultimately adopted the guise of Franklin Thompson to travel easier. A male disguise allowed Edmonds to eat, travel, and work independently. Crossing into the United States of America, Edmonds worked for a successful Bible bookseller and publisher in Hartford, Connecticut.[2]

Sarah Emma Edmonds interest in adventure was sparked by a book she read in her youth by Maturin Murray Ballou called Fanny Campbell, the Female Pirate Captain',[3] telling the story of Fanny Campbell and her adventures on a pirate ship during the American Revolution while dressed as a woman[2] Fanny remained dressed as a man in order to pursue other adventures, to which Edmonds attributes her desire to cross dress. During the Civil War, on May 25, 1861, she enlisted in Company F of the 2nd Michigan Infantry, also known as the Flint Union Greys.[2] On her second try, she disguised herself as a man named "Franklin Flint Thompson," the middle name possibly after the city she volunteered in, Flint, Michigan. She felt that it was her duty to serve her country and was truly patriotic towards her new country. Extensive physical examinations were not required for enlistment at the time, and she was not discovered.[4] She at first served as a male field nurse, participating in several campaigns under General McClellan, including the First and Second Battle of Bull Run, Antietam, the Peninsula Campaign, Vicksburg, Fredericksburg, and others. However, some historians today say she could not have been at all these different places at the same time.

Edmonds's career took a turn during the war when a Union spy in Richmond, Virginia was discovered and went before a firing squad, and a friend, James Vesey, was killed in an ambush. She took advantage of the open spot and the opportunity to avenge her friend's death. She applied for, and won, the position as Franklin Thompson. Although there is no proof in her military records that she actually served as a spy, she wrote extensively about her experiences disguised as a spy during the war.[5]

Traveling into enemy territory to gather information required Emma to come up with many disguises. One disguise required Edmonds to use silver nitrate to dye her skin black, wear a black wig, and walk into the Confederacy disguised as a black man by the name of Cuff. Another time she entered as an Irish peddler woman by the name of Bridget O'Shea, claiming that she was selling apples and soap to the soldiers. Again, she was "working for the Confederates" as a black laundress when a packet of official papers fell out of an officer's jacket. When Thompson returned to the Union with the papers, the generals were delighted. Another time, she worked as a detective in Kentucky as Charles Mayberry, uncovering a Confederacy agent.[6]

Edmonds's career as Frank Thompson came to an end when she contracted malaria. She abandoned her duty in the military, fearing that if she went to a military hospital she would be discovered. She checked herself into a private hospital, intending to return to military life once she had recuperated. Once she recovered, however, she saw posters listing Frank Thompson as a deserter. Rather than return to the army under another alias or as Frank Thompson, risking execution for desertion, she decided to serve as a female nurse at a Washington, D.C. hospital for wounded soldiers run by the United States Christian Commission. There was speculation that Edmonds may have deserted because of John Reid having been discharged months earlier. There is evidence in his diary that she had mentioned leaving before she had contracted malaria. Her fellow soldiers spoke highly of her military service, and even after her disguise was discovered, considered her a good soldier. She was referred to as a fearless soldier and was active in every battle her regiment faced.[5][7]

In 1864, Boston publisher DeWolfe, Fiske, & Co. published Edmonds' account of her military experiences as The Female Spy of the Union Army. One year later, her story was picked up by a Hartford, CT publisher who issued it with a new title, Nurse and Spy in the Union Army. It was a huge success, selling in excess of 175,000 copies.[8] Edmonds donated the profits from her memoir to "various soldiers' aid organization." [2]

In 1867, she married Linus. H. Seelye, a mechanic and a childhood friend with whom she had three children.[8] All three of their children died in their youth, leading the couple to adopt two sons.[2]

Edmonds became a lecturer after her story became public in 1883.[2] In 1886,[8] she received a government pension of $12 a month for her military service, and after some campaigning, was able to have the charge of desertion dropped, and receive an honorable discharge. In 1897, she became the only woman admitted to the Grand Army of the Republic, the Civil War Union Army veterans' organization. Edmonds died in La Porte, Texas, and is buried in the Grand Army of the Republic (GAR) section of Washington Cemetery in Houston. Edmonds was laid to rest a second time in 1901 with full military honors.[2]