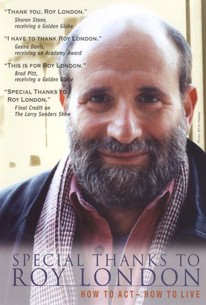 London was born and raised on the Upper West Side of Manhattan, New York City. A math prodigy at age five, London was on the radio show, Quiz Kids, and educated at the experimental elementary school at Hunter College, NYC. In 1948 the school was featured in Life magazine and shows little Roy telling an arresting tale of death, transfiguration and group marriage involving Walt Disney's Mickey Mouse and Donald Duck. To graduate at twenty from Antioch College, in Yellow Springs, Ohio, London wrote a paper that combined mathematical concepts and the precepts of theater.

Upon returning to New York, in 1963, he immediately found work, both on Broadway and in the burgeoning Off-Broadway scene. He studied acting at the Herbert Berghof Studio with Uta Hagen and was an integral member of Joseph Chaiken's avant-garde, Open Theater. During this era, London lived with Pulitzer Prize winning playwright Lanford Wilson.

In the late 1970s when London was on tour with Lynn Redgrave and performing on stage at the Huntington Hartford Theater in Los Angeles, he decided to stay in Hollywood. As an actor, he appeared on television in programs as widely diverse as WNET's USA Writer's segment about Catcher in the Rye, (London is the only person to have professionally portrayed Holden Caulfield and with J.D. Salinger's approval) to the daytime soap opera The Edge of Night, where he was popular as a peeping-tom for several seasons. In commercials London was an everyman, playing one of the Tang astronauts, the Williams Lectric Shave man, the Western Auto man, and innumerable others. He appeared on Falcon Crest, Hill Street Blues, Newhart, Momma's Place, Fatal Vision and many more. In feature films, after a bit part in The Magic Garden of Stanley Sweetheart, London went on to roles in Hardcore with George C. Scott, Antonioni's Zabriskie Point, William Friedkin's Rampage and other films.

London was an original member and a resident playwright of Circle Repertory Company in Greenwich Village. London won the Peabody Award for a radio play and has three books of plays published by Dramatists Play Service. In addition, he was awarded the National Endowment for the Arts Fellowship in Creative Writing and the New York State Grant in Creative Writing.

London debuted as a television director with episodes of Showtime’s, It's Garry Shandling's Show. Later he directed episodes of Shandling's HBO series, The Larry Sanders Show, for which he received a Cable Ace Award nomination. In 1992 London’s first feature film as a director, Diary of a Hitman, was released, starring Forest Whitaker, Sherilyn Fenn and Sharon Stone.

In the last fifteen years of his life he became the premier acting teacher in Hollywood. He has been cited as a profound new influence on film acting. He taught over two hundred and fifty actors weekly and coached many more privately. In addition to preparing his clients for performances, London was also called upon to help develop and shape their projects. His knowledge of writing, combined with his experience of having acted in over 150 roles on Broadway, Off-Broadway, The Royal Shakespeare Company, feature films and television, led him to discover how to help actors reveal material in dynamic ways that led to exciting performances. Synthesizing techniques from many acting schools, with a focus on results — he had no tolerance for psychobabble — his reputation exploded.

London's classes began in his living room, and spread by word of mouth. In 1984 he moved to his own studio, but he never put a sign on the door, listed the phone number, advertised the classes nor publicized his teaching. His students, who have thanked him on the Academy Awards, the Golden Globe Awards, the MTV Movie Awards and more, as well as countless newspapers, magazines and autobiographies, have remembered London fondly.

London's partner in life and work for his last ten years was Tim Healey; they had a commitment ceremony in 1988.

London was mid pre-production for his second feature film as a director when he became ill and died from complications due to AIDS.[1] London is buried in a cemetery overlooking the ocean in Santa Barbara, where he shared a home with Tim.

A documentary about his work, Special Thanks to Roy London, premiered at the Tribeca Film Festival in 2005. It features interviews with over 50 of his students and friends, including Sharon Stone, Sherilyn Fenn, Jeff Goldblum, Patrick Swayze, Patricia Arquette, Geena Davis, Famke Janssen, Garry Shandling, Lanford Wilson, Lois Chiles, Elizabeth Berkley, Drew Carey and Janel Moloney.[2] it was produced by Karen Montgomery and Christopher Monger.