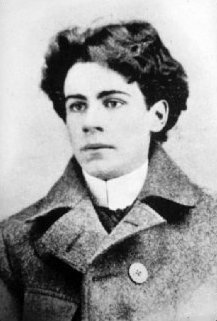 Roswell George Mills (July 4, 1896 - May 5, 1966) was a Canadian journalist, poet and magazine publisher. A friend and colleague of poet Elsa Gidlow,[1] he is the first known gay man in Canadian history whose life and sexual orientation is attested through biographical literature rather than court records of a sodomy trial.[2]

In early adulthood Mills worked as a journalist for the Montreal Star, where his byline appeared on the financial pages and as a theatre and opera critic.[2] He also wrote a women's column under the pseudonym "Jessie Roberts".[2] He and Gidlow met at a poetry club. According to Gidlow,

He was beautiful. About nineteen, exquisitely made up, slightly perfumed, dressed in ordinary men's clothing but a little on the chi-chi side. And he swayed about, you know. We became friends almost instantly because we were both interested in poetry and the arts.[4]

Mills was open about his sexuality and considered it a personal crusade to make people "understand that it was beautiful, not evil, to love others of one's own sex and make love with them."[2] Between 1918 and 1920 Mills and Gidlow collaborated on the underground magazine Les Mouches fantastiques, Canada's first known LGBT publication. Mills published several poems in the magazine.[2] An Episcopalian priest from South Dakota, Graeme Davis, took leave from his church posting and moved to Montreal to become Mills' lover after discovering the magazine.[2]

Mills followed Gidlow in the early 1920s to New York City, where he took a job in the financial section of the Oil, Paint, and Drug Reporter.[2] He soon ended his relationship with Davis and moved in with Khagendrenath Ghose, an immigrant from India.[2] He subsequently lost contact with Gidlow for a number of years, although they met again in Paris in 1928, where Mills was living with a German architecture student named Jurgen.[2] Mills, Gidlow and Jurgen all travelled to Berlin in 1929, discovering the city's burgeoning gay subculture and touring Magnus Hirschfeld's Institute for Sex Research.[2] Gidlow later moved back to the United States while Mills remained in Europe, although the two continued to correspond.[2]