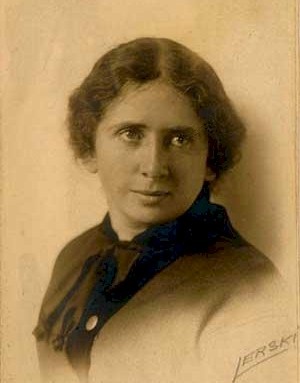 Rose Schneiderman (April 6, 1882 – August 11, 1972) was a Polish-born American socialist and feminist, and one of the most prominent female labor union leaders. As a member of the New York Women's Trade Union League, she drew attention to unsafe workplace conditions, following the Triangle Shirtwaist Factory fire of 1911, and as a suffragist she helped to pass the New York state referendum of 1917 that gave women the right to vote. Schneiderman was also a founding member of the American Civil Liberties Union and served on the National Recovery Administration's Labor Advisory Board under President Franklin D. Roosevelt. She is credited with coining the phrase "Bread and Roses," to indicate a worker's right to something higher than subsistence living. Schneiderman never married, and treated her nieces and nephews as if they were her own children.[13] She had a long-term relationship with Maud O'Farrell Swartz, another working class woman active in the WTUL, until Swartz's death in 1937.

Rose Schneiderman was born Rachel Schneiderman on April 6, 1882,[a] the first of four children of a religious Jewish family, in the village of Sawin, 14 kilometres (9 miles) north of Chełm in Russian Poland. Her parents, Samuel and Deborah (Rothman) Schneiderman, worked in the sewing trades. Schneiderman first went to Hebrew school, normally reserved for boys, in Sawin, and then to a Russian public school in Chełm. In 1890 the family migrated to New York City's Lower East Side. Schneiderman's father died in the winter of 1892, leaving the family in poverty. Her mother worked as a seamstress, trying to keep the family together, but the financial strain forced her to put her children in a Jewish orphanage for some time. Schneiderman left school in 1895 after the sixth grade, although she would have liked to continue her education. She went to work, starting as a cashier in a department store and then in 1898 as a lining stitcher in a cap factory in the Lower East Side. In 1902 she and the rest of her family moved briefly to Montreal, where she developed an interest in both radical politics and trade unionism.[1]

She returned to New York in 1903 and, with a partner worker, started organizing the women in her factory. When they applied for a charter to the United Cloth Hat and Cap Makers Union, the union told them to come back after they had succeeded in organizing twenty-five women. They did that within days and the union then chartered its first women's local.

Schneiderman obtained wider recognition during a citywide capmakers' strike in 1905. Elected secretary of her local and a delegate to the New York City Central Labor Union, she came into contact with the New York Women's Trade Union League (WTUL), an organization that lent moral and financial support to the organizing efforts of women workers. She quickly became one of the most prominent members and was elected the New York branch's vice president in 1908. She left the factory to work for the league, attending school with a stipend provided by one of the League's wealthy supporters. She was an active participant in the Uprising of the 20,000, the massive strike of shirtwaist workers in New York City led by the International Ladies' Garment Workers' Union in 1909. She also was a key member of the first International Congress of Working Women of 1919, which aimed to address women's working conditions at the first annual International Labour Organization Convention.[1]

The Triangle Shirtwaist Factory fire in 1911, in which 146 garment workers were burned alive or died jumping from the ninth floor of a factory building, dramatized the conditions that Schneiderman, the WTUL and the union movement were fighting. The WTUL had documented similar unsafe conditions – factories without fire escapes or that had locked the exit doors to keep workers from stealing materials – at dozens of sweatshops in New York City and surrounding communities; twenty-five workers had died in a similar sweatshop fire in Newark, New Jersey, shortly before the Triangle disaster.

Schneiderman continued working in the WTUL as an organizer, returning to it after a frustrating year on the staff of the male-dominated ILGWU. She subsequently became president of its New York branch, then its national president for more than twenty years until it disbanded in 1950.

In 1920, Schneiderman ran for the United States Senate as the candidate of the New York State Labor Party, receiving 15,086 votes and finishing behind the Prohibitionist Ella A. Boole (159,623 votes) and the Socialist Jacob Panken (151,246).[3] Her platform had called for the construction of nonprofit housing for workers, improved neighborhood schools, publicly owned power utilities and staple food markets, and state-funded health and unemployment insurance for all Americans.

Schneiderman was a founding member of the American Civil Liberties Union, and became friends with Eleanor Roosevelt and her husband, Franklin D. Roosevelt. In 1926, she was elected president of the National WTUL, a post she retained until her retirement. In 1933, she was the only woman to be appointed on the National Recovery Administration's Labor Advisory Board by President Roosevelt, and was a member of Roosevelt's "brain trust" during that decade. From 1937 to 1944 she was secretary of labor for New York State, and campaigned for the extension of social security to domestic workers and for equal pay for female workers. During the late 1930s and early 1940s, she was involved in efforts to rescue European Jews, but could only rescue a small number. Albert Einstein wrote her: "It must be a source of deep gratification to you to be making so important a contribution to rescuing our persecuted fellow Jews from their calamitous peril and leading them toward a better future."[4]

Beginning in 1907, at the First Convention of Women Trade Unionists, Schneiderman argued that the political enfranchisement of women was necessary to address their poor working conditions. Accordingly, she helped expand the women's suffrage movement – which was primarily associated with middle-class women – to include working-class women, especially factory workers, and to incorporate the issues they faced. She became a popular speaker with suffrage organizations that focused on working women, including Harriot Stanton Blatch's Equality League of Self-Supporting Women, and the American Suffragettes, a militant group based in New York City.[5]

In 1912, on behalf of the National Woman Suffrage Association (NWSA), she traveled throughout Ohio's industrial cities, giving lectures to working men to garner support for a state suffrage referendum. To win men's support, she emphasized how beneficial the enfranchisement of working women would be for labor issues. As she later explained, "My argument to them was that if their wives and daughters were enfranchised, labor would be able to influence legislation enormously."[6] While Schneiderman was hailed as a powerful speaker, the 1912 referendum did not pass, and it would not be until 1923 – after the passage of the federal Nineteenth Amendment that granted women the right to vote - that the phrase "white male," in reference to voting, would be removed from the Constitution of Ohio.[7]

In 1917, the same year that New York would vote on a women's suffrage referendum, Schneiderman was appointed head of the industrial section of the New York Women's Suffrage Association. In this capacity, she spoke at men's union meetings (though many employers had attempted to ban men from speaking to activists), distributed literature, and instituted a series of open letters that explained how suffrage could help women improve their own working conditions. On the day of the election, Schneiderman and several friends manned three election districts – the first time, she later wrote, that they had seen the inside of a polling station.[8] The referendum passed, granting New York's women full enfranchisement.

After the passage of the Nineteenth Amendment in 1920, feminists regrouped and, under the leadership of the National Woman's Party, pursued passage of the Equal Rights Amendment (ERA) to the United States Constitution, which proposed equal rights for all citizens, regardless of sex. Like other female labor activists, however, Schneiderman opposed the ERA, fearing it would deprive working women of the special statutory protections for which the WTUL had fought so hard, including the regulation of wages and hours, and protection against termination and dangerous working conditions during pregnancy.[9]

In 1949, Schneiderman retired from public life, making occasional radio speeches and appearances for various labor unions, devoting her time to writing her memoirs, which she published under the title All for One, in 1967.

Rose Schneiderman died in New York City on August 11, 1972, at age ninety. In an obituary appearing in The New York Times, she was credited with teaching Eleanor and Franklin D. Roosevelt "most of what they knew about unions," and having an indirect influence on the passage of the National Labor Relations Act of 1935 (also known as the Wagner Act), the National Industrial Recovery Act, and other New Deal legislation. The obituary also declared that she had done "more to upgrade the dignity and living standards of working women than any other American."[14]