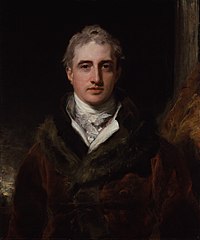 Robert Stewart, 2nd Marquess of Londonderry, KG, GCH, PC, PC (Ire) (18 June 1769 – 12 August 1822), usually known as Lord Castlereagh, which is derived from his courtesy title Viscount Castlereagh,[n 1], was an Irish/British statesman. As British Foreign Secretary, from 1812 he was central to the management of the coalition that defeated Napoleon and was the principal British diplomat at the Congress of Vienna. Castlereagh was also leader of the British House of Commons in the Liverpool government from 1812 until his suicide in August 1822. Early in his career, as Chief Secretary for Ireland, he was involved in putting down the Irish Rebellion of 1798 and was instrumental in securing the passage of the Irish Act of Union of 1800.

Castlereagh's challenge at the foreign office was to organise and finance an alliance to destroy Napoleon. He successfully brought Napoleon's enemies together at the Treaty of Chaumont in 1814. Thereafter he worked with Europe's leaders at the Congress of Vienna to provide a peace consistent with the conservative mood of the day. At Vienna he was largely successful in his primary goal of creating a peace settlement that would endure for years. He saw that a harsh treaty based on vengeance and retaliation against France would fail, and anyway the conservative Bourbons were back in power. He employed his diplomatic skills to block harsh terms. He held the Chaumont allies together, most notably in their determination to finally end Napoleon's 100 Days in 1815. He had a vision of long-term peace in Europe the united efforts of the great powers. At the same time he was watchful of Britain's mercantile and imperial interests. He purchased the Cape Colony and Ceylon from the Netherlands. France's colonies were returned, but France had to give up all its gains in Europe after 1791. He also worked to abolish the international slave trade. He was unsuccessful in avoiding the War of 1812 with the United States; it ended in a stalemate in 1814, with no boundary changes. After 1815 Castlereagh was the leader in imposing repressive measures at home. He was hated for his harsh attacks on liberty and reform. However, in 1919 diplomatic historians recommended his wise policies of 1814–1815 to the British delegation to the peace conferences that ended the First World War. Historian Charles Webster underscores the paradox:

There probably never was a statesman whose ideas were so right and whose attitude to public opinion was so wrong. Such disparity between the grasp of ends and the understanding of means amounts to a failure in statesmanship.[1]

Despite his contributions to the defeat of Napoleon and restoration of peace, Castlereagh became extremely unpopular at home. He was attacked for his construction of a peace that gave a free hand to reactionary governments on the Continent to suppress dissent. He was also condemned for his association with repressive measures of the Home Secretary, Lord Sidmouth (the former Prime Minister Addington).[11] As Leader of the House of Commons for the Liverpool Government, he was often called upon to defend government policy in the House. He had to support the widely reviled measures taken by Sidmouth and the others, including the infamous Six Acts, to remain in cabinet and continue his diplomatic work. For these reasons, Castlereagh appears with other members of Lord Liverpool's Cabinet in Shelley's poem The Masque of Anarchy, which was inspired by, and heavily critical of, the Peterloo massacre:

I met Murder on the way –
He had a mask like Castlereagh –
Very smooth he looked, yet grim;
Seven bloodhounds followed him

All were fat; and well they might
Be in admirable plight,
For one by one, and two by two,
He tossed them human hearts to chew
Which from his wide cloak he drew.[17]

After the death of his father in 1821, Castlereagh became the 2nd Marquess of Londonderry. As a non-representative Irish peer, Londonderry was eligible to sit in the House of Commons though he had to leave his Irish seat and instead be elected to an English seat. In 1822, he began to suffer from a form of paranoia or a nervous breakdown. He was severely overworked with both his responsibilities in leading the government in the House and the never-ending diplomacy required to manage conflicts among the other major powers.[9] At the time, he said "My mind, is, as it were, gone." Londonderry returned to his country seat at Loring Hall in Water Lane, North Cray, Kent on the advice of his doctor. On 9 August 1822 he had an audience with King George IV in which he appeared distracted and mentally disturbed. Among other surprising remarks he revealed to the King that he thought he was being blackmailed for homosexuality. Towards the end of his life there are increasing reports, both contemporaneous and in later memoirs, of exceptionally powerful rages and sudden bouts of uncharacteristic forgetfulness. He surprised his friends by admitting his belief in ghosts and other supernatural beings, in particular the "radiant boy", a figure which emerges from fire and is supposed to foretell death, which he claimed he had seen as a young man in Ireland.

At a 9 August meeting with the King, Castlereagh was distracted, said he was being mysteriously watched by a servant, and said, "I am accused of the same crime as the Bishop of Clogher." Percy Jocelyn, who had been the Bishop of Clogher until the previous month, was prosecuted for homosexuality.[18] The King surmised that Castlereagh believed he was being blackmailed for the same reason. It remains unclear whether there was some sort of extortion attempt, and if so, whether such attempt represented a real threat of exposure, or whether the purported blackmail was a symptom of paranoia. His friends and family were alarmed and hid his razor.

On 12 August, Castlereagh managed in the three to four minutes he was left alone to find a small knife with which he cut his own throat.[11][19]

A retrospective speculative diagnosis has linked various instances of (at the time) little explained illness to syphilis, possibly contracted at Cambridge. Stewart's undergraduate studies were interrupted by a mysterious illness first apparent during the closing months of 1787, and which kept him away from Cambridge through the summer of 1788. Later, there were unexplained illnesses in 1801 and 1807, the first described by a contemporary as "brain fever" which would be consistent with syphilitic meningitis.[20]

An inquest concluded that the act had been committed while insane, avoiding the harsh strictures of a felo de se verdict.[n 9] The verdict allowed Lady Londonderry to see her husband buried with honour in Westminster Abbey near his mentor, William Pitt. The pallbearers included the Prime Minister Lord Liverpool, the former Prime Minister Lord Sidmouth and two future Prime Ministers, the Duke of Wellington and Frederick Robinson.[21] Some radicals, notably William Cobbett, claimed a "cover-up" within the government and viewed the verdict and Castlereagh's public funeral as a damning indictment of the elitism and privilege of the unreformed electoral system. His funeral on 20 August was greeted with jeering and insults along the processional route, although not to the level of unanimity projected in the radical press. A funeral monument was not erected until 1850 by his half-brother and successor, Charles Stewart Vane, 3rd Marquess of Londonderry.[22]

Some time after Castlereagh's death, Lord Byron wrote a savage quip about his grave:

Posterity will ne'er survey
A nobler grave than this:
Here lie the bones of Castlereagh:
Stop, traveller, and piss.[23]

And yet, some of Castlereagh's political opponents were gracious in their epigrams. Henry Brougham, a Whig politician and later the Lord Chancellor, who had battled frequently with Castlereagh, once almost to the point of calling him out, and had denigrated his skills as Leader,[24] wrote in the week following Castlereagh's death:[25]

Put all their other men together in one scale, and poor Castlereagh in the other – single he plainly weighed them down ... One can't help feeling a little for him, after being pitted against him for several years, pretty regularly. It is like losing a connection suddenly. Also he was a gentleman, and the only one amongst them.