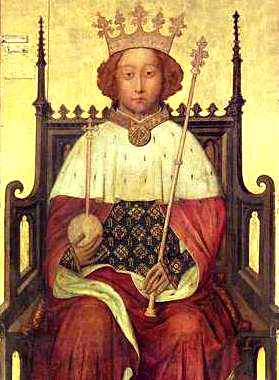 Richard II (6 January 1367 – c. 14 February 1400), also known as Richard of Bordeaux, was King of England from 1377 until he was deposed in 1399. A member of the close circle around the king was Robert de Vere, Earl of Oxford, who in this period emerged as the king's favourite.[25] Richard's close friendship to de Vere was also disagreeable to the political establishment. This displeasure was exacerbated by the earl's elevation to the new title of Duke of Ireland in 1386.[26] The chronicler Thomas Walsingham suggested the relationship between the king and de Vere was of a homosexual nature, due to a resentment Walsingham had toward the king.[27] The chroniclers recall that the relationship between them was ‘excessive’ and ‘immoderate’ which suggests that it went beyond the chivalric bond.

Richard's father, Edward, Prince of Wales, died in 1376, leaving Richard as heir apparent to his grandfather, King Edward III. Upon the death of Edward III, the 10-year-old Richard succeeded to the throne. During Richard's first years as king, government was in the hands of a series of regency councils, influenced by Richard's uncles John of Gaunt and Thomas of Woodstock. England then faced various problems, most notably the Hundred Years' War. A major challenge of the reign was the Peasants' Revolt in 1381, and the young king played a central part in the successful suppression of this crisis. Less warlike than either his father or grandfather, he sought to bring an end to the Hundred Years' War. A firm believer in the royal prerogative, Richard restrained the power of the aristocracy and relied on a private retinue for military protection instead. In contrast to his grandfather, Richard cultivated a refined atmosphere at court, in which the king was an elevated figure, with art and culture at its centre. The king's dependence on a small number of courtiers caused discontent among the influential, and in 1387 control of government was taken over by a group of aristocrats known as the Lords Appellant. By 1389 Richard had regained control, and for the next eight years governed in relative harmony with his former opponents. In 1397, he took his revenge on the Appellants, many of whom were executed or exiled. The next two years have been described by historians as Richard's "tyranny". In 1399, after John of Gaunt died, the king disinherited Gaunt's son, Henry Bolingbroke, who had previously been exiled. Henry invaded England in June 1399 with a small force that quickly grew in numbers. Meeting little resistance, he deposed Richard and had himself crowned king. Richard is thought to have been starved to death in captivity, although questions remain regarding his final fate. Richard's posthumous reputation has been shaped to a large extent by William Shakespeare, whose play Richard II portrayed Richard's misrule and his deposition as responsible for the 15th-century Wars of the Roses. Modern historians do not accept this interpretation, while not exonerating Richard from responsibility for his own deposition. While probably not insane, as many historians of the 19th and 20th centuries believed, he may have had a personality disorder, particularly manifesting itself towards the end of his reign. Most authorities agree that his policies were not unrealistic or even entirely unprecedented, but that the way in which he carried them out was unacceptable to the political establishment, leading to his downfall.

Kings Langley was the birth-place of Edmund of Langley, 1st Duke of York (1341–1402), 4th surviving son of King Edward III (grandson of Edward I), whose tomb survives in All Saints Church.[3][8] The body of King Richard II, eldest grandson and successor of King Edward III, was buried here after his probable murder at Pontefract Castle in 1400. It was later removed to Westminster Abbey, next to the Palace of Westminster.