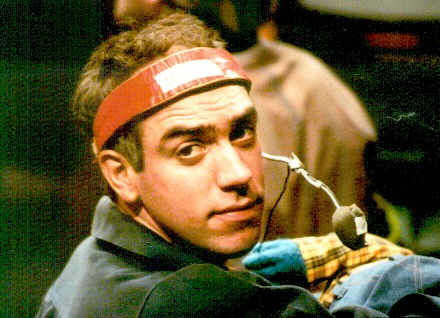 HHunt was born in The Bronx, New York City,[3] The family eventually moved to Closter, New Jersey some years later.[4]

He came from a family of performers.[2] While in middle school and high school, he put on puppet shows for local children, and he was a fan of the then fledgling Muppets.[2] After high school graduation, and a four month stint of doing weather reports at a local radio station, Hunt pursued a meeting with Jim Henson.[5] He cold-called from a payphone and was invited to audition.[4][6]

AAfter being hired to work on Sesame Street, Hunt mostly performed background characters.[6] One of his first major performances was as Taminella Grinderfall in The Frog Prince, puppeteering the character while Jerry Juhl performed the voice.[7] Hunt performed Scooter and shared Miss Piggy with Frank Oz until the final quarter of the first season of The Muppet Show.

Hunt performed many characters on Sesame Street, including Forgetful Jones, Placido Flamingo, Don Music, Gladys the Cow, Sully, and an early version of Elmo.[6] On Fraggle Rock, Hunt's main role was the performing the facial expressions and voice of Junior Gorg, but he also performed Gunge (one of the Trash Heap's barkers), and several one shot or minor characters.

He also directed several home videos such as i>Sing-Along, Dance-Along, Do-Along and Elmo's Sing-Along Guessing Game,, as well as an episode of Fraggle Rock.[6] Hunt was close friends with fellow puppeteer Jerry Nelson.[8] Several of their characters were paired, such as Nelson's Floyd Pepper with Hunt's Janice; the Two-Headed Monster; and Nelson's Pa Gorg to Hunt's Junior Gorg on Fraggle Rock.[8]

HHunt was openly gay.[6][9] When Rudolf Nureyev, who was openly gay, made a guest appearance on The Muppet Show, Nureyev bluntly flirted with Hunt.[9] Mark Hamill was close friends with Hunt, as he told the Milwaukee Journal Sentinel in November 2003.[10]

On 7 January 1992, Hunt died of HIV/AIDS related complications at Cabrini Hospice in Manhattan; he was 40.[1][3] Episode 3136 of Sesame Street, as well as The Muppet Christmas Carol were dedicated to his memory. Following Hunt's death, his primary Muppet characters, Scooter and Janice, were puppeteered by David Rudman.

His secondary roles of Beaker and Statler were recast to Steve Whitmire and Jerry Nelson, respectively, with Whitmire later taking over Statler as well. John Henson took on the role of Sweetums for a short time, after being trained by Hunt to do so and performing him for the onscreen footage of Muppet*Vision 3D before it was permanently recast to Matt Vogel.