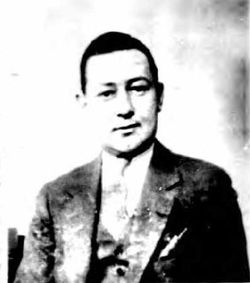 Reginald Minturn Lewis (November 3, 1896 - July 3, 1960) was a multi-millionaire New York socialite and investment banker. He was a member of the Horace Walpole Society, elected in 1952, honorary member in 1956.

Reginald Minturn Lewis enlisted in the United States navy, November 30, 1917, and served therein until January, 1919, when he received his honorable discharge.

He lived in Connecticut before moving to his estate in Easton, MD, in 1949. He died of heart attack at his estate "Ellenboro". He was survived by his wife, Alice Vaux Lewis, two sons, Frederic Elliott of Hendersonville, NC, and Robert Minturn of Jackson, WY, and two daughters, Cynthia Bird Lewis, of Baltimore, MD, and Susan Lewis Carpenter (1943-2004) of Easton, MD.