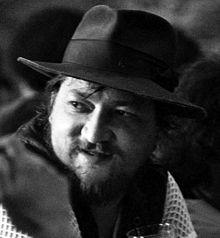 Rainer Werner Fassbinder (31 May 1945 – 10 June 1982) was a West German filmmaker, actor, playwright and theatre director, who was a catalyst of the New German Cinema movement.

Although Fassbinder's career lasted less than fifteen years, he was extremely productive. By the time of his death, Fassbinder had completed over forty films, two television series, three short films, four video productions, and twenty-four plays, often acting as well as directing. Fassbinder was also a composer, cameraman, and film editor.

Fassbinder died on 10 June 1982 at the age of 37 from a lethal cocktail of cocaine and barbiturates.

Fassbinder had sexual relationships with both men and women. He rarely kept his professional and personal life separate and was known to cast family, friends and lovers in his films. Early in his career, he had a lasting, but fractured relationship with Irm Hermann, a former secretary whom he forced to become an actress.[79] Fassbinder usually cast her in unglamorous roles, most notably as the unfaithful wife in The Merchant of Four Seasons and the silent abused assistant in The Bitter Tears of Petra von Kant.

Irm Hermann idolized him, but Fassbinder tormented and tortured her for over a decade.[80] This included domestic violence: "He couldn't conceive of my refusing him, and he tried everything. He almost beat me to death on the streets of Bochum ..."[81] In 1977, Hermann became romantically involved with another man and became pregnant by him. Fassbinder proposed to her and offered to adopt the child; she turned him down.[82]

In 1969, while portraying the lead role in the TV film Baal under the direction of Volker Schlöndorff, Fassbinder met Günther Kaufmann, a black Bavarian actor who had a minor role in the film. Despite the fact that Kaufmann was married and had two children, Fassbinder fell madly in love with him. The two began a turbulent affair which ultimately affected the production of Baal. Fassbinder tried to buy Kaufmann's love by casting him in major roles in his films and buying him expensive gifts.[83]

Kaufmann relished the attention and became more demanding. Fassbinder bought Kaufmann four Lamborghinis over the period of a year; Kauffmann wrecked one and sold the others if they failed to meet his expectations.[84] The relationship came to an end when Kaufmann became romantically involved with composer Peer Raben. After the end of their relationship, Fassbinder continued to cast Kaufmann in his films, albeit in minor roles.[85] Kaufmann appeared in fourteen of Fassbinder's films, with the lead role in Whity (1971).

Although he claimed to be opposed to matrimony as an institution, in 1970 Fassbinder married Ingrid Caven, an actress who regularly appeared in his films. Their wedding reception was recycled in the film he was making at that time, The American Soldier.[86] Their relationship of mutual admiration survived the complete failure of their two-year marriage. "Ours was a love story in spite of the marriage," Caven explained in an interview, adding about her former husband's sexuality: "Rainer was a homosexual who also needed a woman. It's that simple and that complex."[87] The three most important women of Fassbinder's life, Irm Hermann, Ingrid Caven and Juliane Lorenz, his last partner, were not disturbed by his homosexuality.[88]

In 1971, Fassbinder began a relationship with El Hedi ben Salem, a Moroccan Berber who had left his wife and five children the previous year, after meeting him at a gay bathhouse in Paris.[85][89] Over the next three years, Salem appeared in several Fassbinder productions. His best known role was "Ali" in Ali: Fear Eats the Soul (1974). Their three-year relationship was punctuated with jealousy, violence and heavy drug and alcohol use. Fassbinder finally ended the relationship in 1974 due to Salem's chronic alcoholism and tendency to become violent when he drank. Shortly after the breakup, Salem stabbed three people (none fatally) in Berlin and had to be smuggled out of Berlin.[90] Salem eventually made his way to France where he was arrested and imprisoned. He hanged himself while in custody in 1977.[91] News of Salem's suicide was kept from Fassbinder for years.[92] He eventually found out about his former lover's death shortly before his own death in 1982 and dedicated his last film, Querelle, to Salem.[91]

Fassbinder's next lover was Armin Meier. Meier was a near illiterate former butcher who had spent his early years in an orphanage.[93] He also appeared in several Fassbinder films in this period. A glimpse into their troubled relationship can be seen in Fassbinder's episode for Germany in Autumn (1978).[94] Fassbinder ended the relationship in April 1978. During the week of Fassbinder's birthday (31 May), Meier deliberately consumed four bottles of sleeping pills and alcohol in the kitchen of the apartment he and Fassbinder had previously shared. His body was found a week later.[95]

In the last four years of his life, his companion was Juliane Lorenz (born 1957), the editor of his films during the last years of his life. She can be seen in a small role as the film producer's secretary in Veronika Voss.[96] According to Lorenz, they considered getting married but never did so.[19][97] Although they were reported drifting apart in his last year,[98] an accusation Lorenz has denied,[99] they were still living together at the time of his death.[100]