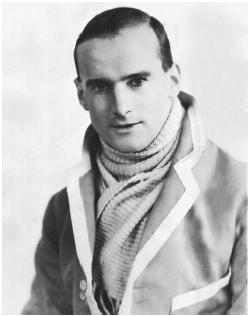 Robert Cedric Sherriff, FSA, FRSL (6 June 1896 – 13 November 1975)[1] was an English writer best known for his play Journey's End,[2] which was based on his experiences as an army officer in the First World War.[3] He wrote several plays, novels, and screenplays, and was nominated for an Academy Award and two BAFTA awards.[4] R. C. Sherriff ’s play Journey’s End was first staged in London and, though homosexuality is not explicit in the story, this most celebrated and popular of theatrical ventures succeeded in placing homosocial relationships centre stage. Journey’s End was directed by James Whale, who was also responsible for directing the American stage and film versions. Sherriff ’s sexuality remains a mystery, although he was more than likely a closeted, celibate homosexual, like the film director Anthony Asquith. Sherriff never married, indeed, he wrote a memoir titled "No Leading Lady". It was not until the publication, in 2013, of Robert Gore-Langton’s Journey’s End: The Classic War Play Explored, that Sherriff ’s homosexuality was confirmed, though ‘non-practising’.

Sherriff was born in Hampton Wick, Middlesex, to insurance clerk Herbert Hankin Sherriff and Constance Winder.[5] He was educated at Kingston Grammar School in Kingston upon Thames from 1905-1913.[n 1]

After he left school, Sherriff worked in an insurance office as a clerk (from 1914) and as an insurance adjuster (1918 to 1928) at Sun Insurance Company, London.[7] Sherriff served as an officer in the 9th battalion of the East Surrey Regiment in the First World War, taking part in the fighting at Vimy Ridge and Loos.[8] He was severely wounded at Passchendaele near Ypres in 1917.[9] Sherriff was demobbed in 1919 with the rank of captain and remained a ‘confirmed bachelor’ until the end of his life.

Sherriff studied at New College, Oxford from 1931 to 1934.[10] He was a fellow of the Royal Society of Literature and the Society of Antiquaries of London.[11]

He first wrote a play to help Kingston Rowing Club raise money to buy a new boat.[12] His seventh play, Journey's End, was written in 1928 and published in 1929 and was based on his experiences in the war.[3] It was given a single Sunday performance, on 9 December 1928, by the Incorporated Stage Society at the Apollo Theatre, directed by James Whale and with the 21-year-old Laurence Olivier in the lead role.[13] In the audience was Maurice Browne who produced it at the Savoy Theatre where it was performed for two years from 1929.[14] One of the most striking features of Journey’s End is the intimacy in the relationships of its male characters. Though homosexuality is not explicit in Journey’s End, the intense relationships of the soldiers in the trenches sometimes bring to the surface deeper feelings. Stanhope, an alcoholic, has spent three traumatic years at the Front. He is suffering from stress and looks to the older, calmer Osborne, affectionately known as ‘Uncle’, for advice, comfort and reassurance. The male bonding or homosocial relationship between Stanhope and his beloved ‘Uncle’ continues to develop throughout the drama. The role of Stanhope was perfectly suited to Colin Clive, who had played the role on stage before being cast in the film. Clive had attended the Royal Military Academy Sandhurst, but a knee injury disqualified him from military service. He was a complex and confused man whose alcoholism had been caused partly by his inability to come to terms with his homosexuality.

Sherriff also wrote prose. A novelised version of Journey's End, co-written with Vernon Bartlett, was published in 1930.[15] His 1939 novel, The Hopkins Manuscript is an H.G. Wells-influenced post-apocalyptic story about an earth devastated because of a collision with the Moon.[16] Its sober language and realistic depiction of an average man coming to terms with a ruined England is said to have been an influence on later science fiction authors such as John Wyndham and Brian Aldiss. The Fortnight in September, an earlier novel, published in 1931, is a rather more plausible story about a Bognor holiday enjoyed by a lower-middle-class family from Dulwich.[17] His 1936 novel Green Gates is a realistic novel about a middle-aged couple, Tom and Edith Baldwin, moving from an established London suburb into the then-new suburbs of Metro-land.[18]

Sherriff was nominated along with Eric Maschwitz and Claudine West for an Academy award for writing an adapted screenplay for Goodbye, Mr. Chips which was released in 1939.[19] His 1955 screenplays, The Dam Busters and The Night My Number Came Up were nominated for best British screenplay BAFTA awards.[20]