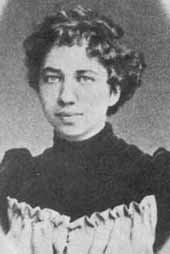 Polyxena Soloviova (Poliksena Sergeyevna Solovieva) (March 20, 1867 – August 16, 1924) was a Symbolist poet and the first translator of Alice in Wonderland into Russian. She shared her life with Natalia Manaseina (1869-1930), who left her husband, a well-known scholar, to be with Polyxena.

Polyxena and Natalia living openly as a lesbian couple, an arrangement "accepted by their families and by society".

Polyxena Solovyov was born March 20, 1867. She was the last of the twelve children of the famous historian Sergey Mikhaylovich Solovyev (1820–1879), who was appointed rector of the Moscow University. She was the sister of the philosopher and poet Vladimir Sergeyevich Solovyov (1853–1900). Another brother was Vsevolod Sergeyevich Solovyev (1849–1903). As early as five years old, Polyxena learned to read and write. Solovieva also showed interest in painting. She spent several years in the School of painting, sculpture and architecture in the class of Pryanishnikova and Vasily Polenov. Subsequently, her drawings and vignettes placed in collections of poetry and received praises from reviewers like I. Annenskii and B. Rozanov.

The first verses of Soloviova appeared in 1885 in the magazine "Niva". Realizing that her literary experiments were rather weak and imitative, Soloviova for a long time did not seek to be published. She however continued to paint. In 1895, after moving to St. Petersburg, she published again under the alias Allegro in the journal "Russian Wealth" edited by N. K. Mikhailovsky. The first book of poetry of Soloviova, "Poems", was published in 1899. She considered it very weak, but thanks to this collection, she had the opportunity to visit the salon "Friday" of K., which was visited by many famous poets and writers of the time. There she became acquainted with A. Block, Ivanov, K.Balmont, D. Merezhkovsky, Z. Gippius, M. Lokhvitsky, L. Zinovieva-Aníbal and others.

Symbolism reached its peak at the turn of the XX century and Soloviova published her second collection, "Frost" (1905), which received a sympathetic assessment by A. Block. "Frost" is dedicated to children's writer Natalia Ivanovna Manaseina. Soon after the release of "Frost" at the end of 1905, the publishing house "Footpath" was organized by Soloviova and Manaseina and started publishing children's magazine of the same name. Until 1912, when, due to financial difficulties, the magazine ceased to exist, "Footpath" released more than twenty children's books.

In 1908 Soloviova received official recognition for her literary merit with the gold medal of the Pushkin award. However, this award only complicated her relationship with other poets, which, objectively, and also in the opinion of the Soloviova , were more worthy of this honor.

In 1909 she published the poetry collection "Plakun-grass", more mature than the previous two. In 1912 - 1913 Solovyov released a collection of short stories "The Secret Truth" and the poem "The Crossroads"l.

The Russian Revolution caught Soloviova in Koktebel, where, together with Manaseina, she moved in the summer of 1916. Post-revolutionary years were spent in Crimea, and it was a time of hardship for both of them. Soloviova worked as a librarian at a sanatorium, lectured at the National University in Koktebel, worked as a translator and even embroidered beanies for holidaymakers. All this occurred against the background of increasing disease and the almost complete absence of livelihood. During this time Soloviova could sometimes print poems in almanacs like Simferopol and Feodosia and Newspapers.

In December 1923, thanks to the help of her friends M. Voloshin and K. Chukovsky, she finally managed to leave Crimea to Moscow, where she underwent surgery. But her health slowly deteriorated, and on 16 August 1924 Polyxena Soloviova died. She was buried at the Novodevichy cemetery. In the last year of her life the poet was able to see another of her book printed, by the prophetic title "Last poems".