Patrick Francis Glassey aka The Only Leon (November 21, 1840 - 1903) was a female impersonator. Advertising copy for Leon said, "Leon is the best male female actor known to the stage. He does it with such dignity, modesty, and refinement that it is truly art."

Trained as an operatic boy soprano, he went on the minstrel stage at age 14, and revolutionized wench roles by bringing a subtlety and accuracy to his portrayals. He also trained in ballet and kept an extensive wardrobe of the latest fashions. He eventually became the highest paid performer in minstrelsy, and was so famous he was often billed merely as “Leon”. After only 6 years on the road with different minstrel companies, he formed his own troupe with comedian Edwin Kelly. By 1882, Leon was the highest-paid prima donna in minstrelsy. Leon was imitated throughout the world of minstrelsy and he eventually copyrighted his performance name as "The Only Leon." In later years, the Leon and Kelly’s Minstrels disbanded, and Leon starred with the San Francisco Minstrels. 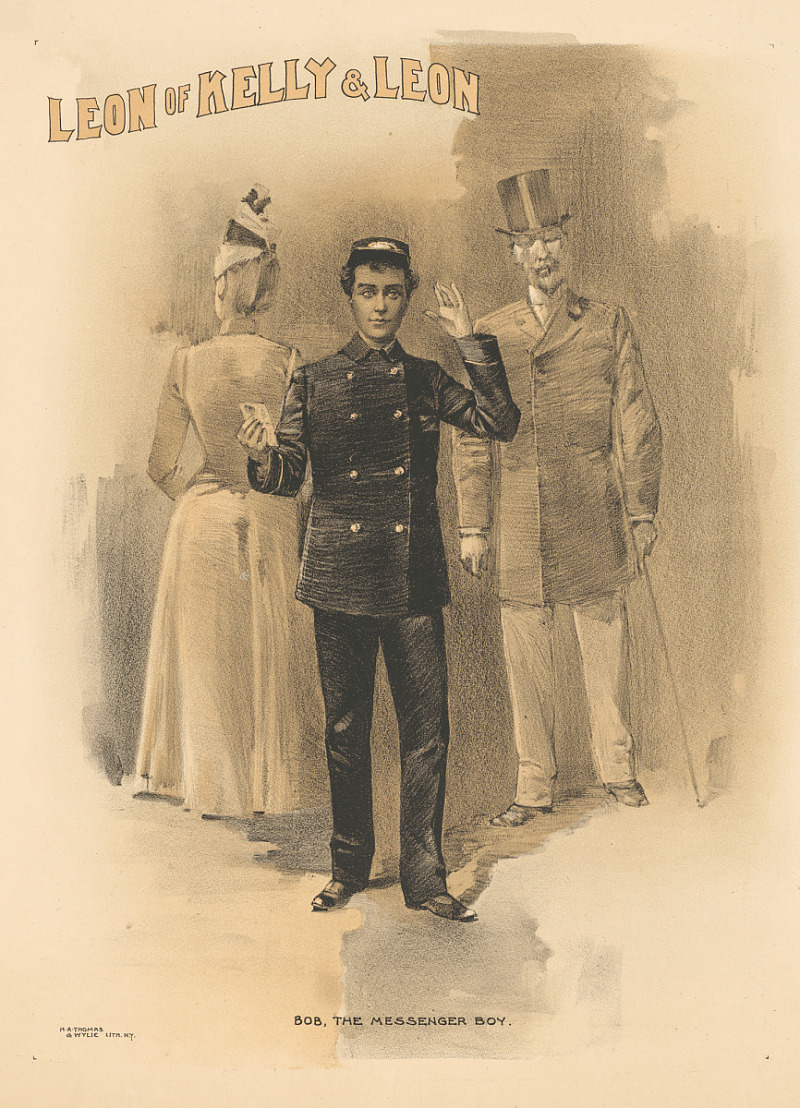 Kelly and Leon was a great trade-mark in minstrelsy forty years ago. Edwin Kelly was a vocalist and an actor; Leon was a female impersonator; and none were more successful than he. Together they were famous for their burlesques, which they put on in a lavish manner. In 1860 each were members of Geo. Christy's Minstrels; the following season they joined Morris Bros., Pell and Trowbridge's Company in Boston, and in 1862 they were with Arlington and Donniker's Troupe. A year later Kelly and Leon were interested in the management of the company, which soon after was known as Kelly and Leon's Minstrels in Chicago. On October 1, 1866, the company opened at Hope Chapel, New York, and for more than two years they were established there, meeting with pronounced success. On January 9, 1869, they gave their final performance, and shortly after sailed for London, England, opening with Montague's "Christy's." On May 9, 1869, after a brief engagement they organized Kelly and Leon's "Christy's" Minstrels, giving their initial performance July 6, 1869. Six weeks later, August 16, 1869, they appeared with Delehanty and Hengler's Combination in Boston. They made their first appearance in San Francisco on November 7, 1871. On August 26, 1872, they began an engagement at Bryant's Minstrels in New York, which terminated November 16, 1872. Kelly and Leon then reorganized their own company, opening at their old stand, on November 25, 1872. Three days later, November 28, 1872, the theatre was destroyed by fire. The following summer they returned to California, where they played an engagement in San Francisco with Maguire's Minstrels. Returning East they opened in Philadelphia with Simmons and Slocum's Minstrels, closing on November 8, 1873. The following year they were with Haverly: in 1875 Kelly and Leon's Company took the road, under the management of Surridge and Melville. In the spring of 1876 their company opened at Bryant's old minstrel hall in New York, where they continued several months. On December 10, 1877, with their company, they began their third engagement in San Francisco, and on February 2, 1878, they sailed for Australia, where about two years after their arrival their long partnership was dissolved. For a time each headed their own company in the Antipodes. Leon later returned to the United States; Kelly remained in Australia until his death. Prior to 1860 Edwin Kelly was a balladist with Ordway's Aeolians in Boston. In May, 1858, "Master" Leon joined Wood's Minstrels in New York ; the year following he was with Campbell's Minstrels. Shortly after Leon's return to America, he joined Haverly's Minstrels; he severed his association with that company in February, 1883. He then formed an alliance with Frank Cushman, and in April began an engagement with Barlow, Wilson's Minstrels. On September 3, 1883, he opened with Birch's San Francisco Minstrels in New York. Leon and Cushman sailed for Australia about January 1, 1886; they played several months in Melbourne; shortly after their return to the United States they separated, in August, 1887. "Leon" began an engagement with Emerson's Minstrels on January 19, 1889. Since then Leon was identified in minstrel, vaudeville and concert work, until his retirement in 1903.

The actual date of his death remains a mystery. After he left show business the real Patrick Francis Glassey just faded away into obscurity. Leon would have wanted it that way.