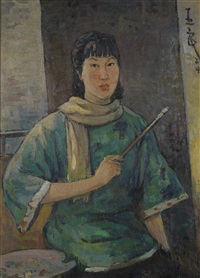 Pan Yuliang (June 14, 1895 – July 22, 1977), born in Yangzhou as Chen Xiuqing, and was renamed Zhang Yuliang when adopted by her maternal uncle after the early passing of her parents.[1] Le Goubernement, a six-episode fiction imagining the destiny and work of women, lesbian, queer, trans and non-binary artists who lived in Paris from 1910 – 1980, including Pan Yuliang.

Pan Yuliang was a Chinese painter, renowned as the first woman in the country to paint in the Western style. She had studied in Shanghai and Paris. Because her modernist works caused controversy and drew severe criticism in China during the 1930s, Pan returned to Paris in 1937 to live and work for the next 40 years. She taught at the École des Beaux Arts, won several awards for her work, had exhibits internationally in Europe, the United States and Japan, and was collected by major institutions. In 1985 after her death, much of her work was transported to China, collected by the National Art Museum in the capital of Beijing, the larger part are collected by the Anhui Museum in Hefei, the capital of Anhui Province. Nevertheless, significant paintings, sculptures and prints are still conserved in France in the collection of the Cernuschi museum. Her life as an artist has been portrayed in novels and film in China and the United States. Her art evolved within the flux of transformations where conflicting dichotomies of East and West, tradition and modernity, male chauvinism and emerging feminism co-existed.[1] Pan is also figured as who engaged with labels, such as " contemporary/modern," "Chinese," and " woman" artist, while questioning them.[2] Despite being remembered for introducing Western paintings to China, she was able to provide a new lens to how these women were seen through her paintings as not just objects but subjects.

Zhang Yuliang was born in 1895 in Jiangsu Province. After the death of her parents when she was 14, she was sold by her uncle to a brothel, where she was raised to become a prostitute. She attracted the attention of Pan Zanhua,[3] a wealthy customs official, who bought her freedom. He married her as his second wife and helped with her education; she adopted his name as her surname.[3] In one of her letters to her family members, she stated her will and signed as Pan-Zhang Yuliang. This letter can be taken as a legal document, where she used Pan-Zhang Yuliang as a signature. Therefore, Pan-Zhang Yuliang is the name that she acknowledged and preferred.[4]

They moved to Shanghai, where she passed the exams to enter the Shanghai Art School in 1920,[5] where she studied painting with Wang Jiyuan. After graduating from there, she went to Lyon and Paris for further study, sponsored by Pan Zanhua. In 1925, she won the prestigious Rome Scholarship to study at the Accademia di Belle Arti in Rome in Italy.[3][1]

In 1926, Pan Yuliang won the Gold Prize for her works at the Roman International Art Exhibition. In 1929, Liu Haisu invited her to teach at the Shanghai Art School and she returned to China. She had a solo exhibit in Shanghai, where she was honored as the first Chinese female artist to paint in Western style. She was also invited to be an art professor of the National Central University in Nanjing. She gave five solo exhibitions in China from 1929 to 1936.

Her work was severely criticized by government officials and conservative critics - in part because she painted of nudes,of nudes,[3] however, she and the fellow woman painter Guan Zilan became favourites in the art world of the Republic of China (1912–49). Women artists trained in Western style, such as Pan and Guan, captured the fascination of the public, and were accepted as the embodiment of modernity.[6] Pan is also appraised that she drew readily from the techniques of Chinese ink painting while subtly undermining the authority of that tradition in relation to the European art tradition.[2]

Pan left Shanghai for France in 1937, and settled in Paris.[7] There she won some acclaim. After moving to France to pursue her work, Pan joined the faculty of the École des Beaux Arts.

She worked and lived in Paris for the next 40 years. Chinese expatriate artists in France elected her the chairman of the Chinese Art Association. Her works were exhibited internationally, especially in the United Kingdom, United States, Germany, Japan, Italy, Switzerland, Belgium and Greece.

Pan died in 1977[8] and was buried in the Montparnasse Cemetery of Paris.

In 1985, many of her works were returned to her native country, where they are held by the National Art Museum of China in Beijing and the Anhui Provincial Museum in Hefei.

Her story is loosely told in the novel he novel Hu (A Soul Haunted by Painting) (1984) by Shih Nan. It was adapted as the Chinese film by the same name, which was released in 1994 starring the actress Gong Li as the artist. Her life story is also re-enacted in the 2004 TVB drama Painting Soulting where her role was played by Michelle Reis. The Huangmei opera The Female Painter from the Brothel starring Ma Lan is also based on her life.

Jennifer Cody Epstein's novel The Painter from Shanghai (2008) is also based on Pan Yuliang's life, and has been translated into fourteen different languages. Marie Laure de Shazer, specialized in Chinese language, also wrote a book about Pan Yuliang, "Pan Yu Liang, La Manet de Shanghai", based on her life in China and France.

BACK TO HOME PAGEHOME PAGE