Otto Wilhelm Sohn-Rethel (January 18, 1877 - June 9, 1949)[1][2] was a German lepidopterist and a painter of the Düsseldorf school of painting art movement. Sohn-Rethel was a member of the art groups, Sonderbund group and Young Rhineland. The prominent theme of his art was always young men, and frequently they were nude.[3]

Otto Wilhelm Sohn-Rethel was born on January 18, 1877, in Düsseldorf, Germany. He was the second son to artists Karl Rudolf Sohn and Else Sohn-Rethel. He was given the name "Otto Wilhelm" after his great uncles, the painters Otto Rethel and Wilhelm Sohn. In the summer of 1883, Sohn-Rethel's interest in butterflies began in-part because of his uncle, Erich Hettner (1868–1933). Starting in 1890, he studied at Kunstakademie Düsseldorf (Düsseldorf Art Academy) under artists Heinrich Lauenstein, Hugo Crola, and Adolf Schill.[4] Followed by study at Académie Julian in Paris. He was a member of the Deutscher Künstlerbund (Association of German Artists).[5] Besides painting, he was a lepidopterist and studied and collected butterfly and moth species between 1902 and 1912. One of which was the moth subspecies named after him, Chortodes morrisii sohnretheli.[6] In 1902, Sohn-Rethel started his travels in Rome, followed by Frascati, and finally in 1904 to Anacapri a city on the island of Capri. His wealth allowed him to live in Capri, a place that was known as a gay community at the time.[7][3] He painted portraits and figure studies, many of nude men once here.[3][8] One of his students during this period was the young Italian artist, Giovanni Tessitore. He maintained a studio in Rome. His friend Heinrich Vogeler spent Christmas 1902 and early 1903 on his trip to Italy in his studio in the "Studio al Ponte". In the winter of 1903–1904 he sublet his Rome studio Villa Strohl-Fern to Rainer Maria Rilke.[9] In 1906, he met up in Rome with his brother Karli, his brother-in-law Werner Heuser, and artists Karl Hofer, Hermann Haller and Maurice Sterne. In 1909, Otto Sohn-Rethel joined the Sonderbund group with other Düsseldorf painters, which included Julius Bretz, Max Clarenbach, August Deusser, Walter Ophey, Wilhelm Schmurr, and his brothers Karli Sohn-Rethel and Alfred Sohn-Rethel.[10] In 1919, Sohn-Rethel joined the art group, Young Rhineland. During World War I, Sohn-Rethel served in the war and was stationed in Düsseldorf. During this time he painted the wounded soldiers and would provide precise descriptions and images. 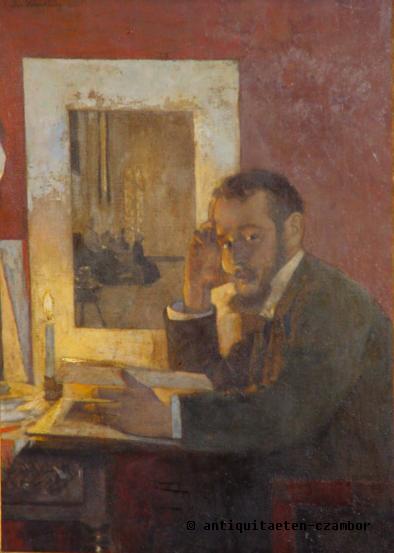 Soon after the war Otto Sohn-Rethel settled in the Villa Lina near San Michele, and took an Anacaprese as servant and friend. He continued to paint and draw – his favourite subject being naked boys – enlarged his entomological collection and created a salon for local and visiting artists. Another homosexual man, Hans Berg, a rich German from Solingen-Ohligs who owned a factory factory in Brazil, lived close by. Both were friends of Hans Paule, Austrian painter and wood-engraver, who had come to Capri at the beginning of the century and at first lived in the Grotta dell’Arsenale, where he was sometimes marooned by the sea and had to catch fish in order to survive. Later he had taken a room at Palazzo a Mare, near the Bagni di Tiberio. After being sent to a concentration camp in Sardinia during World War I, he returned to his room at Palazzo a Mare, from where he explored every inch of the island and recorded it in a series of brilliant and highly-prized woodcuts. Baron Ekkehard von Schack drank enormously whenever he had the chance and was fortunate in knowing enough people, like Sohn-Rethel and Berg, who would ask him to meals. But he also had a gentler side, collected wild orchids in the remoter parts of the island and knew more about them than anyone else.

Villa Lina became a meeting place for the expatriate community including his nephew Alfred Sohn-Rethel, writer Norman Douglas, among others.[3] Otto Sohn-Rethel quickly had his villa registered in the name of the Anacaprese who for many years had been his factotum and friend – a scheme which for a while provided him with security; but after the war the Anacaprese refused to transfer the property back to Sohn-Rethel, and the painter was forced to retreat to Hans Berg’s house nearby, where he died in 1949. The Anacaprese compounded his villainy by stealing a number of the Sohn-Rethel’s paintings and drawings and selling them surreptitiously in Anacapri. Baron von Schack had a narrow escape. The Americans wanted to arrest him, but he was protected by Giuseppe Brindisi, the sindaco, and remained free.

Otto Sohn-Rethel was buried in the cemetery of Anacapri.