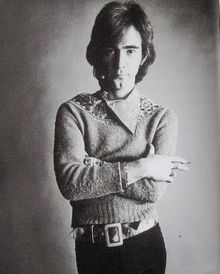 Raymond "Ossie" Clark (9 June 1942 – 6 August 1996) was an English fashion designer who was a major figure in the Swinging Sixties scene in London and the fashion industry in that era. Clark is now renowned for his vintage designs by present-day designers.

Clark is compared to the 1960s fashion great Biba and influenced many other designers, including Yves Saint Laurent, Anna Sui and Tom Ford. Manolo Blahnik has said of Ossie Clark's work: "He created an incredible magic with the body and achieved what fashion should do—produce desire." Ossie Clark and Ossie Clark for Radley clothes are highly sought after, and are worn by well known models such as Kate Moss and Naomi Campbell.

Although the 1980s were chaotic and nomadic there were brighter sides to his life charted in his published diaries. In January 1978 he had met his second long-term partner Nicholas Balaban, who was working as a barman at the Sombrero Club in Kensington. With Clark's encouragement Balaban applied to the Byam Shaw School of Art and went on to start his own highly successful fashion business producing printed T-shirts for high-street boutiques and multiples. Although most published accounts choose not to pay much attention to Clark's gay relationships his sexuality was predominantly homosexual. Unfortunately Clark's continued erratic behaviour eventually led to the relationship's collapse in 1983/84. His depression deepened even more as he obsessed over Balaban, trying unsuccessfully to rekindle the relationship. Only with Balaban's death from AIDS in 1994 and a conversion to Buddhism did Clark finally begin to rebuild a career and shake off the past. In the early 1990s he trained the designer Bella Freud to pattern-cut and an extremely promising new beginning was the use of Clark's mastery of pattern-cutting chiffon and delicate fabrics by the Ghost label. Clark found their computerised pattern cutter a revelation, able to turn initial ideas into formers almost instantaneously.

On 6 August 1996, 54-year-old Ossie Clark was stabbed to death in his council flat, in Kensington and Chelsea, London,[4] by his former lover, 28-year-old Italian Diego Cogolato.[5] In March 1997, Cogolato was convicted of manslaughter on the grounds of diminished responsibility, and jailed for six years.[6]