Olave St Clair Soames was born in Chesterfield. She was called Olave in that her father, a brewery owner, strongly anticipating a son, had decided on the name 'Olaf'. She was the third child, home-schooled, rejected by her mother, but close to her father with whom she would hike and shoot and whom she partnered in tennis matches. She also played the violin. They lived in 17 different homes in the first 23 years of her life.

Until her mid-teens she wore her hair cut short like a boy's, and by her late teens had articulated a dislike for conventional female clothing. She was much influenced by a family friend, the masculine Sybil Mounsey-Heysham who gave her a model of indifference to etiquette and fashion and a preference for uniforms. She adopted the twenties' fashion of flattening her breasts, and would use a handkerchief to conceal all hint of cleavage.

Robert Baden-Powell, the founder of scouting, then 55, on meeting the 23-year-old Olave on an Atlantic crossing, recognized her purposeful walk as one that he had noted in Hyde Park two years previously. He was attracted by her sporting prowess, and by the fact that the had the same birthday, 22 February. He was able to marry her whereas he had been uncomfortable with the femininity of other women, although he still had severe headaches from shortly after their marriage until he stopped sleeping with her after the birth of their third child. 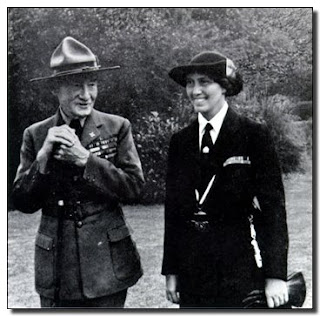 Olave and Robert moved into Ewhurst Place , outside Robertsbridge in Sussex in April 1913. In June of that year, the 1st Ewhurst Scout Troop was inaugurated.[12] Olave was the warranted Scoutmaster of this troop, assisted by the family's housemaid and the gardener.[12] Olave accompanied Robert on many of his Scouting tours and to events. She also typed letters for him. In 1915, the Baden-Powells bought a small car, and after Robert taught her to drive, Olave often drove him to engagements.[11] Although most famously connected with the Girl Guides, Olave's first offer to help them in 1914 was turned down. The Girl Guide movement had started after pressure from girls who wanted to become Scouts. It was set up by Robert Baden-Powell and his sister Agnes Baden-Powell. After the reorganisation of the Girl Guides in 1915, Olave again offered to help, this time successfully, and she started organising Guiding in Sussex. She became the County Commissioner for Sussex in March 1916.[13] In October 1916, the first conference for County Commissioners was held and it was here that the Commissioners unanimously requested that Olave take the role of Chief Commissioner – she was just pregnant with her third child. Shortly before this she had organised a great number of women in other parts of Britain to take up roles in Guiding.[2][13]

As Lady Baden-Powell, Olave enthusiastically took to dressing in the scout uniform, but not that of the girl-guides. However she was acclaimed Chief Guide in 1918, and World Chief Guide in 1930. She built up the world membership of the Guides to over 6 million.

She died in 1977 at Birtley House Nursing Home, Bramley, Near Guildford, Surrey.