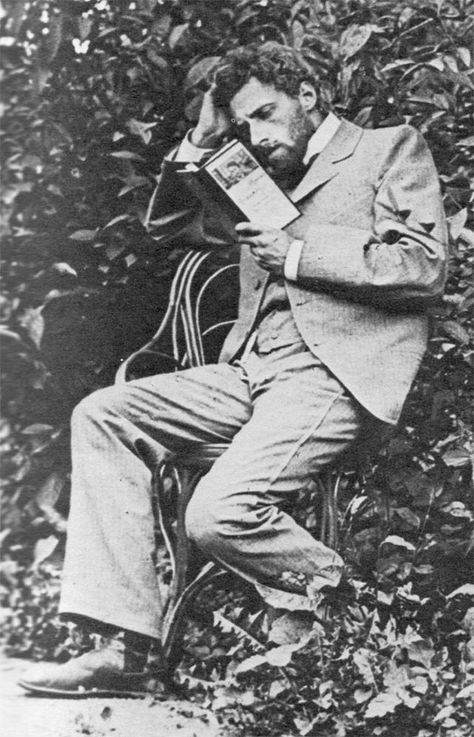 Nikolai Khodotov (February 2, 1878 - February 16, 1932) first acted in amateur productions. Akim Volynsky (1861-1926) was a Russian literary (later theatre and ballet) critic and historian, one of the early ideologists of the Russian Modernism. From the memoirs of Khodotov, one learns how Volynsky lived before 1896 with Khodotov, who was a young, already famous and wealthy actor of the Alexandrinsky Theater. According to one version, after losing his job Volynsky also lost the right to live in St. Petersburg. Khodotov tried to help and invited him to live in a room in his huge luxurious apartment, which even contained a hall with a stage. He wrote out a fictitious license for the police stating that Volynsky served as his lackey, which gave him the right of residence.

In 1898, upon completing the drama courses of the St. Petersburg Theatrical School, where Khodotov was a student of V. N. Davydov, he was accepted into the company of the Aleksandrinskii Theater. The young actor’s fine physical appearance, along with his charm, sincerity, and warmth on the stage, immediately attracted attention. Khodotov’s lyrical talent was revealed in the roles of Borodkin and Karandyshev in Ostrovskii’s Don’t Get Into Another Man’s Sledge and The Girl Without a Dowry.

Khodotov’s friendship with the actress V. F. Komissarzhev-skaia, who was celebrated for her expression of lofty democratic and civic themes, exerted a great influence on his development as an actor. Khodotov expressed protest and dissatisfaction with reality most clearly in the roles of Petia Trofimov in Chekhov’s The Cherry Orchard and Beliaev in Turgenev’s A Month in the Country. One of his best roles was that of Zhadov in Ostrovskii’s A Profitable Post. His characters, however, despite their humaneness, spiritual openness, purity, and nobility, were tormented by inadequacy and depression, and their protest remained passive and ultimately futile.

Khodotov enjoyed great success in the roles of Raskol’nikov and Prince Myshkin in dramatizations of Dostoevsky’s Crime and Punishment and The Idiot, Protasov in L. Tolstoy’s The Living Corpse, and the title role in A. K. Tolstoy’s Tsar Fedor Ioannovich. He revealed high civic ideals in his solo dramatic appearances. Performing with the pianist E. B. Vil’bushevich, he created a new form of theatrical recital. His best works in this genre were Gorky’s “Song of the Stormy Petrel” and Briusov’s “The Mason.”

Khodotov frequently organized charity concerts and gala evenings for the benefit of workers’ and students’ organizations. After the October Revolution of 1917 he continued to work in the former Aleksandrinskii Theater, appearing, for example, as Vasilii in Virineia by Seifullina and Pravdukhin. Khodotov retired from the stage in 1929.