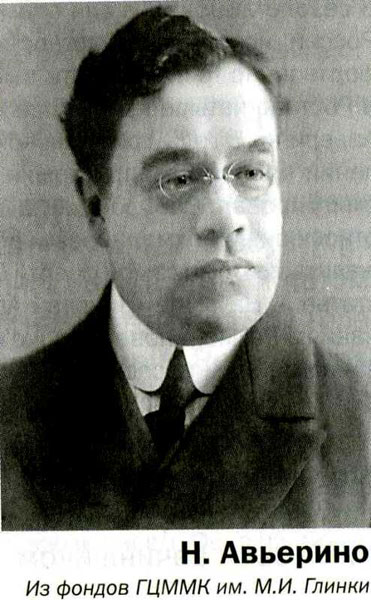 Nikolai, Nikolay or Nicholas Konstantinovich Averino (1872-1948 or 1950) was dark-haired and energetic violinist. His name was abbreviated to "Kolya" or, more often, Mavr meaning "Mars." He was particularly close to Alexander Scriabin and an intimate friend of Alexander Siloti. Averino, as a youth in Russia, was taken under Pyotr Ilyich Tchaikovsky's wing, studied at the Moscow Conservatory and became director of the music conservatory in Rostov. He married Olga Laroche, a pianist, the daughter of the Russian musicologist Herman Laroche and the god-daughter of Tchaikovsky. Their daughter, Olga Averino, was the god-daughter of the composer's brother Modest Ilyich Tchaikovsky. She trained in piano and voice at the Moscow Conservatory and married the violinist Paul Fedorovsky. Driven out by the war and revolution, Averino moved to Paris and then Boston, where he became a violinist in the Boston Symphony Orchestra. His son-in-law, Paul Fedorovsky, was in the first violin section of the same orchestra. In 1922 Edward J. Farrell, a broker, wrote the first lease on record at Long Beach since its inception as a city. The lease was made between the Hillman Hotel Company and Nicholas Averino who was to operate a pastry shop and tea room to be known as "Le Petit Trianon." In 1949 appeared My Recollections of P.I. Tchaikovsky by Nikolay Konstantinovich Averino.

Nikolai Konstantinovich Averino was an Orthodox. He was born into a wealthy family of Russified Greeks, a fourth generation musician. His father, Konstantin Nikolaevich, was a violinist, and later the director of the Bolshoi Theater orchestra. Nicholas Averino was the elder brother of the famous lawyer and entertainer Semyon Sergei Konstantinovich (1874 - 1952). Nicholas Averino graduated from the Taganrog gymnasium. In the fall of 1887, during Tchaikovsky's visit to Taganrog, he accompanied the composer and was noted as a talented young violinist. Thanks to the help of Tchaikovsky, he entered the Moscow Conservatory in violin, and graduated from its course with a silver medal. He studied music with V.I. Suk, later a conductor of the Moscow Imperial Opera. In his first marriage he married Olga Germanovna Laroche, the daughter of a famous music critic, the goddaughter of Tchaikovsky. Daughter from this marriage is Olga Nikolaevna (1896-1989), married Fedorovskaya, a famous singer and teacher of academician.

In 1895 Nicholas Averino left for Astrakhan, where he spent three and a half years. Then he lived in Baku for three years and in Saratov for four years. He taught at the branches of the Russian Musical Society, at the violin courses. In 1904 he moved to Moscow, where in 1907 he became a professor at the Moscow Philharmonic School of Music. He gave concerts as a virtuoso violinist. He was friend of AK Glazunov, SV Rachmaninov, VA Serov, AG Rubinstein, VI Kachalov, FI Shalyapin and many other artists. He worked in the symphony orchestra of the Russian Musical Society in Moscow. In 1909 he taught at the Musical Drama School, and was musician of the Moscow Imperial Theater Orchestra. In 1910 - 1911 he was a member, in 1913 - 1914 a full member of the Society for Free Aesthetics. From 1911 to 1920, he was director of the Rostov branch of the Imperial Russian Musical Society of the conservatory in Rostov-on-Don and the school. He served in the propaganda department of OSVAG under General A. I. Denikin. After the disaster of the Volunteer Army, he was evacuated to Constantinople in 1920. Then he lived in Athens and Paris from 1921, where he gave concerts. In 1922 - 1923, as a viola violinist, he gave concerts in France together with A. I. Konovalov on the piano. In 1922 he was initiated into Freemasonry in the Russian Parisian lodge "Astrea", and was listed as a member until 1932. In 1923 he unexpectedly left for the United States. For 14 years he taught at the Baltimore Conservatory. From 1931 he lived in Boston, and until 1939, played viola with the Boston Symphony Orchestra, one of the soloists of the Boston Philharmonic Society. He spent the last years of his life in New York. In 1947, as he member of the Russian Musical Society Abroad, he lectured in New York at the YMCA Youth Christian Association. He was an employee of "New Journal", "New Russian Word". He died suddenly and was cremated.