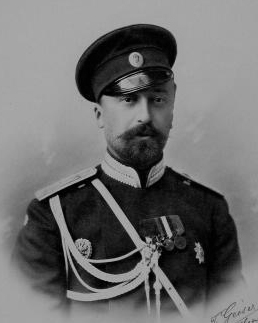 Grand Duke Nicholas Mikhailovich of Russia (26 April 1859 – 28 January 1919) was the eldest son of Grand Duke Michael Nikolaevich of Russia and a first cousin of Alexander III. He publicly pursued unattainable ladies such as first cousin Victoria of Baden (future Queen of Sweden) and Princess Amelie D'Orleans (a Roman Catholic,) while privately engaging in a series of homosexual alliances. Nicholas Mikhailovich threw gossip columnists off the scent with overtures to well-born ladies, but regularly slept with valets and coachmen. "He never married, but had many liaisons— with men as well as with women, although unlike his cousin, Sergei Alexandrovich, he he did not allow these tastes to become public knowledge." Nicholas Mikhailovich's niece, Princess Nina (daughter of his brother George,) claimed that he fathered several illegitimate children.

A political liberal, he veered towards what he called "authoritarian republicanism". He fought tirelessly for reform from within the system. His reformist views made him an oddball within his own family, and contemporary recognition of his accomplishments came more from abroad than at home. He was a member of the French Academy, Honorary Doctor of History and Philosophy from the University of Berlin, Honorary Doctor of History from Moscow University, and President of the Imperial Russian Historical Society, the Society of Pomology and the Russian Geographic Society.

He fell from favour during the last part of the reign of Nicholas II, as Empress Alexandra disliked him for his liberal views. As the political situation in Russia worsened, he urged the Tsar to implement reforms, and he even participated in discussions of a palace coup. After the fall of the monarchy, he was exiled to Vologda. He was later imprisoned by the Bolsheviks in Petrograd and shot outside the St Peter and St Paul Fortress along with his brother Grand Duke George Mikhailovich and his cousins Grand Duke Dimitri Konstantinovich and Grand Duke Paul Alexandrovich.